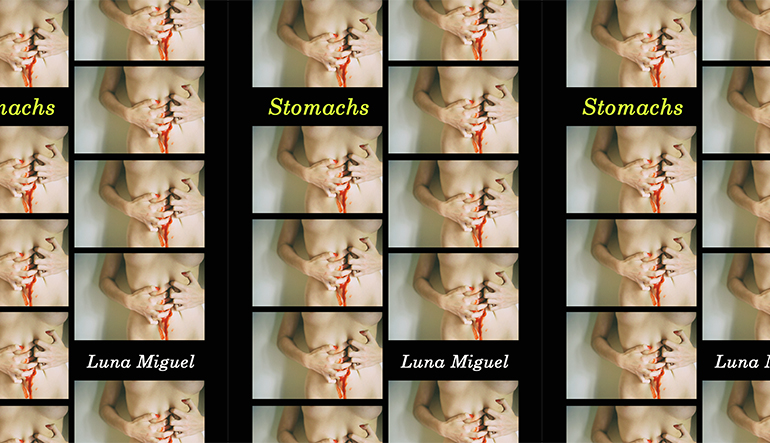 Let’s romanticize purple. Let’s use it when something is so maudlin that it becomes gaudy, to describe a thing that contains copious amounts of weltschmerz. Let’s have this consensus: purple is not the way you (should) want your work to be described. But there are times for sadness and severity and all things bleak, and what do we do then?

Luna Miguel might not have solutions but Stomachs reminds us that melancholy is not always destructive. Translated from the Spanish by Luis Silva and published by Sacramento indie Scrambler Books, Stomachs is Miguel’s first poetry collection available in English. While some covers mean to obfuscate, the design here is blunt—even belligerent, gnarly and grotesque. In a reproduction reminiscent of old-fashioned film, the same image is produced over and over: a naked woman splitting herself open at the abdomen, blood stains trekking toward her navel. It announces that this collection is not for readers seeking cute haikus about cats, or the heartbreak that would rather focus on coffee mugs left in kitchen sinks. This is the ugly kind.

Each of the five sections—STOMACHS, METASTATIS, THE SLAUGHTER, AND THE ANIMALS, EPILOGUE—has its own epigraph, which allows the interpretation that the book is a collection of chapbooks. Each includes the original Spanish alongside its English counterpart. Each includes the combination of adolescent intensity, adult experience, child-like observation, and simple language.

Always, the lens is something morbid, and a touch of something off-kilter, such as the opening lines of “The Light Falls Like Acid”: “and if you receive treatment please don’t pet the animals / end of message.” Later in the poem, the speaker describes cancer as a “healthy organic food” and “the name of my tribe.” To capture the horror of seeing a loved one both here (physical presence) and not (deterioration, in one or more forms), Miguel needs only three lines:

You’re here.
I lack the words to be scared of you. I lack the
experience. There is no money left.

Speaking again of simultaneous compulsion and revulsion, anxiety and apathy, she writes, “Should I dye the floor yellow or just clean it?” And later, “I want to lose weight crying.”

Everything becomes a nightmare, as with the ending lines to “Strings of Blood”:

Throughout the book, the speaker is not the one trapped but still feels the terror of—terror for— the one that is, as with the statement “Every day a butterfly dies trapped in a radiator.” Miguel writes:

She writes, “—I tell you all this because it’s hopeless.” Or maybe there is so much hope despite the evidence that it leads to paralysis, as in “Chemotherapy in August” when the speaker alternates between recording her fear and fury with mania-induced determination:

In Stomachs, a mother dies of cancer and a poet becomes afraid of meat and it is not the version where an angel comes to say, “She is in a better place.” It’s the version where the healthy person has to try to comprehend “A Blue Bag of Poison with Your Name on It,” witnessing that “Your medicine doesn’t smell very good.” It is the one where the poet begs: “Tread on my temple of bones for I fear nothing, / for I have nothing but bones and profane hiccups.” Stomachs highlights grief at its warmest: feral and unforgiving.

Annalia Luna is a contributor at HTML Giant. She earned her B.A. in Literature & Music from Butler University. Her work has been published or is forthcoming at The Rumpus, Literary Hub, and elsewhere. She lives & writes in Houston, TX.