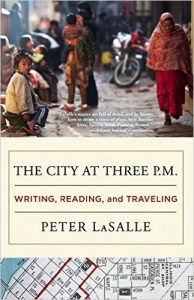 We read travel writers for a variety of reasons, but often it is for the vicarious thrill of the journey, somewhat akin to schadenfreude in that we can happily wince at a traveler’s discomforts and perils while nestled in our easy chairs.

Peter LaSalle’s new collection, The City at Three PM: Writing, Reading, and Traveling, could be such a book—he stays in seedy hotels and wanders into all sorts of sketchy situations, yet it is metaphysical rather than physical challenges that mark his far-flung journeys. It’s not bedbugs or bad food or even annoying tourists, but rather memory and loss, and even Time itself.

In his essay, “Plasticize Your Documents,” he escapes the Tunisian sun and ducks into a restaurant to enjoy the best couscous he’s ever eaten, but what’s really on his mind is Gustave Flaubert’s epic about ancient Carthage, Salammbô, among other things.

He opens the essay with this Parisian manifesto: “Time is a tyranny to be abolished,” and throughout the book his travels often seem directed toward ideas that transcend time, prompted by literature with decidedly mystical themes.

His journey to Tunisia was partly fed by a desire to “meditate some on Flaubert,” but that was merely a starting point; the real joy in reading LaSalle is the wandering he does through both place and time, and he is a most skillful guide. His curiosity is infectious, as is his anticipation for the surprises that punctuate his wanderings.

Even the ritual of packing for his trip takes us places, for along with Salammbô (obtained after a journey on Austin’s endless freeways) LaSalle also packs a battered paperback of St. Augustine’s Confessions, its faded title page signed by his sister’s college roommate—someone he hadn’t thought about in forty years. The signature “conjures up all those sadnesses commonly associated with Time somehow represented in smug personification, inevitably and brutally passing without giving a damn about anybody else.”

LaSalle again feels this sense of total loss when he stops on the way to visit his family’s old summer place in Rhode Island, an experience echoed in Paris by a friend who implores LaSalle to visit the site of his aunt’s summer house outside of Tunis. Although the house was no longer standing, it was vitally important to the friend that LaSalle pay homage to that place, which like ancient Carthage had been lost to time. Along the way LaSalle defends Flaubert against modern literary criticism, laments the state of academia, and assures us that while he is wandering across the pages “it will eventually all figure in.”

And it does. LaSalle’s dreamlike sense of exploration through past and present, memory and loss, the mundane and profound, not only keeps the reader on the brink of discovery but also paints a picture far more vivid than any standard travel narrative.

In his essay “Walking,” LaSalle strolls through Paris and Rio de Janeiro. It is the French surrealist Louis Aragon’s Paris Peasant that leads LaSalle through the City of Light, while it is Joaquim Maria Machado de Assis’s Epitaph of a Small Winner that lands him in Rio, where he seized with the urge to walk to the other side of Sugarloaf Mountain as if he were being drawn along and “moving toward something very definite even if I didn’t know what it was…”
He ultimately arrives at a square marked by a statue of Frédéric Chopin, bowed toward the sea. The statue wasn’t important, but what did matter to LaSalle was that he had come to a place he didn’t expect to, and yet it was a place where he very much wanted, and even needed, to be.

The essays in The City at Three PM suggest that this wandering is more than an approach to travel. It is also an acknowledgment that our destiny in travel, as in life, is beyond our control, and perhaps what it takes is some earnest wandering to finally end up where we need to be.

David Ochsner is the Director of Public Affairs of the College of Liberal Arts at the University of Texas at Austin. A former newspaper editor, Ochsner has written extensively on environmental issues as well as issues of the The New Yorker.