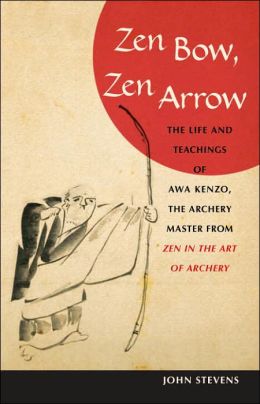 In John Stevens’ half-biography/half-koan-medley Zen Bow, Zen Arrow, we visit bamboo-fenced dojos, learning from early 20th-century Japanese master Awa Kenzo how archery can be a vessel that improves a whole person. In particularly zen fashion, piercing the bullseye doesn’t seem to be the primary requirement in demonstrating an improved self. Indeed: “Kenzo argued that in today’s world the true purpose of archery is to perfect the human spirit.”

Admittedly, some of the koans–spoken by Kenzo, translated by Stevens–read as much like a line of dialogue for a cross-legged yogi in a Saturday Night Live sketch as they read like actual wisdom. The tenth and ultimate level in shooting prowess is, I guess, achieving “a shadowless moon-mind.” Your guess is as good as mine here.

Plenty of times, though, it feels like Kenzo’s aphorisms scratch meaningfully beneath the surface of physical activity, recording the ways in which the spirit moves with the body. A personal favorite: “If you look at the target as your enemy, you will never make progress. The target is a reference point, not your opponent.” I’d like to think that “target,” here, can be read not just as the archery-specific bullseye but also as any of life’s targets that we, you know, aim for. Usually it feels like we’re doing battle with our goals in life–some days it would seem they have picked a fight with us–but in Kenzo’s approach these objectives aren’t battling with us any more or less than a mirror is battling with us. The mirror, the bullseye are reflections of ourselves as we truly are.

Separate but related: one of the “Ten Faults” that an archer can commit, says Kenzo, is “Concern about the quality of the bow and arrow.”

To look at the following modern-day Japanese practitioners–affiliated with Kenzo only in school of thought–it would appear that archery is a wonderful prescription that administers calmness, health, good cheer:

Things get confusing, though, when Stevens feels indebted to say so much about Kenzo’s harshness as a teacher. To wit: Kenzo “was an impatient, critical, and demanding teacher who sometimes drove students away. The situation got so bad that stones were thrown at him by some of his opponents during several of his public performances.” Combine this description with a possibly-true story of Kenzo shooting an arrow through a lightbulb without shattering it, and one’s mental image of Kenzo looks indelibly like Tarantino’s Pei Mei.

But still–how to reconcile the teacher who preaches about a “shadowless moon-mind” and a perfected human spirit with the teacher who apparently made more than one enemy, all over this most sedentary of sports? If it helps, this same walking contradiction has some poignant, unconscious parallels closer to home. The same sports teams that are housed in America’s schools–be they single-building high schools or many-acred universities–can be the school’s largest producer of greed, gluttony, wrath.

So is it foolish to wish that sports can improve the whole person, given the many failures ranging from Kenzo’s temper to the jocks prowling today’s campuses? The answer probably depends on how you see an 8-ounce glass filled with four ounces of water. Emotionally investing in something as obviously trivial as sports can be a proposition doomed from the start–or maybe there is something admirable in our flawed human spirit that we’re hopeful enough to give it a shot.