Home
»
Reading
»
Ruefle, Hokusai, and the American View of Asia 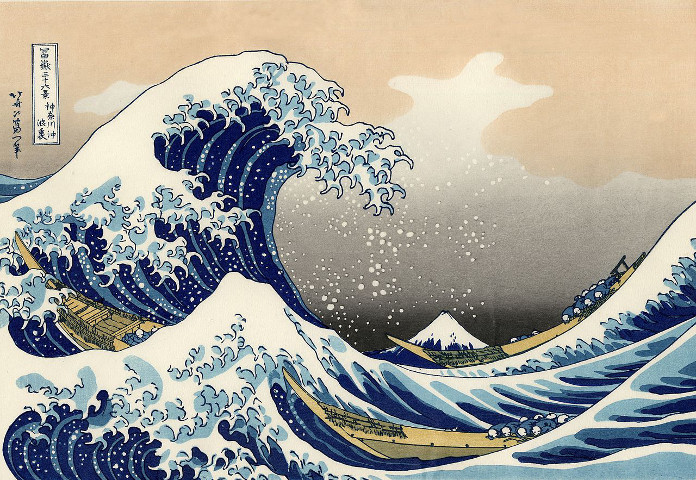 Katsushika Hokusai, contemporary of Goya and Turner and Ingres, artistic godfather of Monet and Van Gogh, was recently the subject of an exhibit at the Museum of Fine Arts here in Boston. He’s been on my mind ever since. Most of us know Hokusai’s artwork from the image above, “The Great Wave off Kanagawa.” Posters of “The Great Wave” are on sale right now if you’re looking to cover your dorm room in clichés. For many of us Hokusai is Japanese art, even if we don’t know his name. Or rather, precisely because we don’t know his name. We allow Hokusai to be a placeholder, an emblem that proclaims “I know this much about other cultures” but then turns around and whispers “I know this little about other cultures.” We treasure Hokusai precisely because we know and appreciate so little about Asian cultures.

The rugged spiritualists of American literature—I’m thinking specifically of Henry David Thoreau and Jack Kerouac—were obsessed with Asian cultures. They perceived Asian cultures as an alternative to American capitalism and the Puritan work ethic. Tired of Christianity but requiring ammunition to combat rampant materialism, they found a convenient new spirituality in translations of Asian wisdom texts.

Neither writer was imperceptive enough to miss the essential ironies in their embrace of a culture they hardly understood. In Kerouac’s The Dharma Bums, the self-contradictory spirit of American Orientalism is captured in the character of Japhy Ryder (a stand-in for poet and scholar Gary Snyder). Japhy talks about his vision for a more peaceful America full of wandering “Dharma Bums”:

the whole thing is a world full of rucksack wanderers, Dharma Bums refusing to subscribe to the general demand that they consume production and therefore have to work for the privilege of consuming all that crap they didn’t really want anyway such as refrigerators, TV sets, cars, at least new fancy cars, certain hair oils and deodorants and general junk you finally always see a week later in the garbage anyway, all of them imprisoned in a system of work, produce, consume, work, produce, consume….

This is only a portion of a long and breathless sentence fragment. Japhy can never stop moving, never stop working, never stop digging toward the other side of the world. He’s pure, bouncing, frenetic, American energy. He approaches the great teachers of calm with the drive of an industrialist, the chauvinism of a colonist, the desperation of a saint who believes radical renunciation will make the tribe holy. Japhy understands the letter but not the spirit. To him, Chinese and Indian and Japanese cultures are just tools he’s using to draw closer to himself, an irony that Kerouac recognizes sometimes with good humor and sometimes with melancholy.

Generations of American writers have approached Asian cultures with the best of intentions but repeatedly missed the mark. How can we rescue Asian artists and thinkers like Hokusai from our own desire to experience them as foreign? How can we experience Hokusai not as the Japanese artist, not as one of the roots of European Japonisme, not as a spiritual guide, but just as a person who made some art?

Mary Ruefle shows us one way in her poem “Rain Effect.” Ruefle’s poem is a breathless sentence fragment like Japhy’s monologue above, but rather than explain Hokusai away the poem enacts Hokusai’s experience of artistic creation. Here’s the full text, courtesy of the Poetry Foundation’s online archives:

A bride and a groom sitting in an open buggy
in the rain, holding hands but not looking
at each other, waiting for the rain to stop,
waiting for the marriage to begin, embarrassed
by the rain, the effect of the rain on the bridal
veil, the wet horse with his mane in his eyes,
the rain cold as the sea, the sea deep as love,
big drops of rain falling on the leather seat,
the rain beaded on a rose pinned to the groom’s
lapel, the rain on the bride’s bouquet,
on the baby’s breath there, the sound of the rain
hitting the driver’s top hat, the rain
shining like satin on the black street,
on the tips of patent leather shoes, Hokusai’s
father who polished mirrors for a living, Hokusai’s
father watching the sky for clouds, Hokusai’s father’s son
drawing rain over a bridge and over the people crossing
the bridge, Hokusai’s father’s son drawing the rain
for hours, Hokusai’s father rubbing a mirror, the rain
cold as the sea, the sea cold as love, the sea swelling
to a tidal wave, at the tip of the wave white.

For the first fourteen lines, there’s nothing especially Japanese or Asian about the world of the poem. It’s a bride and a groom and a rainy day, as close as you can get to universal imagery that breaks free from most cultural codes. Set it in Prague, Chicago, Buenos Aires: it makes little difference. Add a goat and it’s a Chagall. What century is this? Is this Asia or Europe or somewhere in the Americas? There’s no way of knowing.

This is one way of universalizing Hokusai’s art, but there’s a more important method beginning in line fourteen. If the poem had ended one word before the end of line fourteen, at “shoes,” it would have been a compact fourteen lines, an imagistic free-form variation of a sonnet. As it is, we move seven lines past the tips of black shoes to the white on the tip of a painted wave. At the first mention of Hokusai, we step outside of the world of the painting to look at the painter himself. And how do we see him? As “Hokusai’s father’s son.” This pleonasm psychologizes and humanizes Hokusai. It’s a reflective construction—the son seen in terms of the father, the father in terms of the son—just like the mirror that Hokusai’s father polishes. Hokusai the painter sublimates his emotional separation from his father into the image of the bride and groom who are too embarrassed to look at one another. The polishing of the mirror and the meticulous composition of the painting are part of the same process of discovery. Every text is a reflection; every reflection is a text.

Ruefle gives us back a piece of culture by dramatizing its creation. She unpacks it from whatever categorical boxes we might have stuffed it into: Asian, Japanese, old, beautiful. Out of an often well-meaning desire to get to know other cultures, we project onto them our desires, fears, and hatreds. It’s only when we stop putting other people and cultures on a pedestal that we can really see them. Literature, at its best, can break these biased forms of thinking and allow us to experience real empathy.