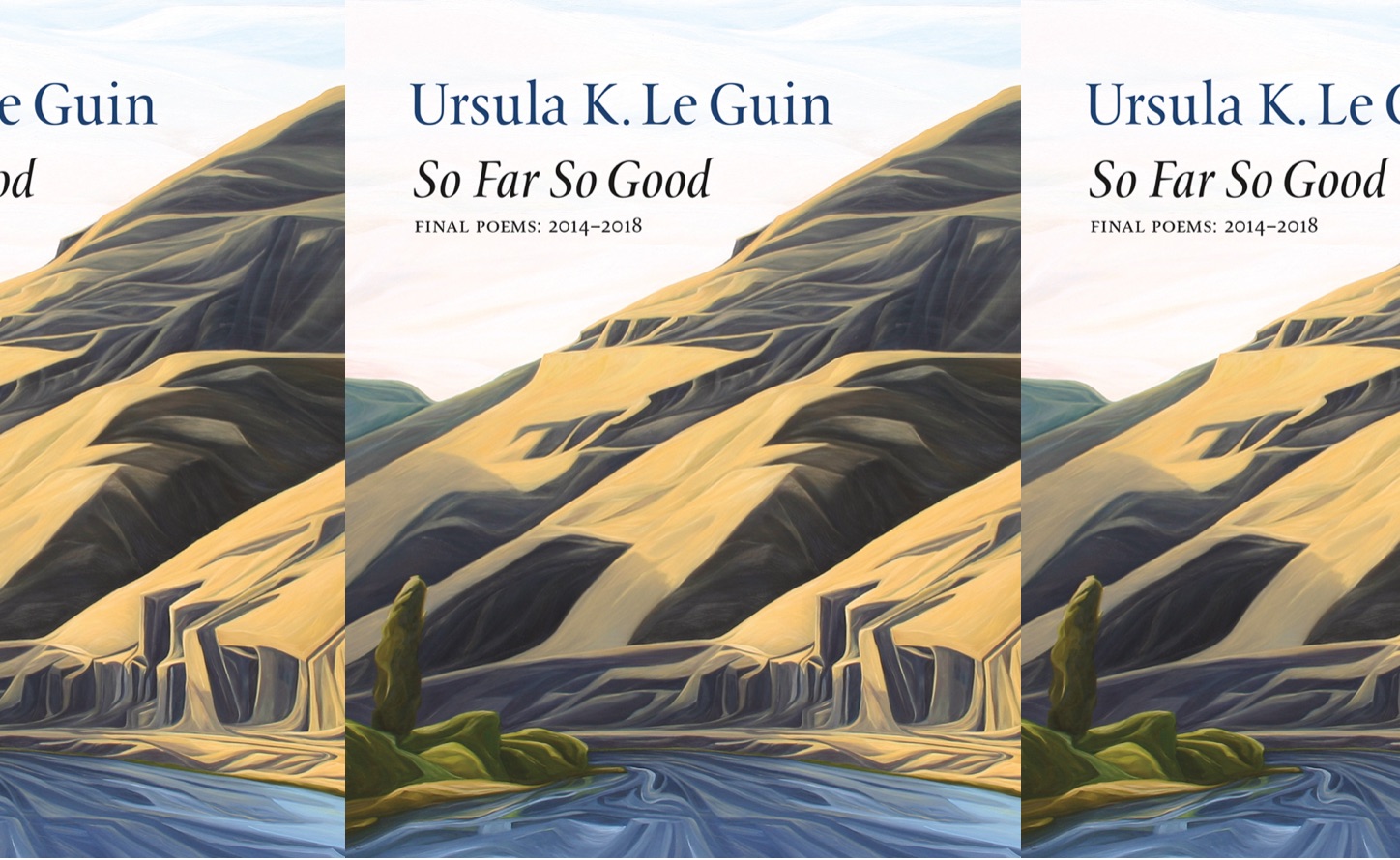 For some, it may come as a surprise that the late Ursula K. Le Guin, a master of the science fiction genre, wrote poetry. Composed near the end of her life, So Far So Good is a lyrical dance in which the speaker both looks back into her past and delights in an unknown future. The poems are aware of the earth, the human connection to the earth, and the beauty of what cannot be known now. Le Guin’s speaker sees death as a cyclical process, as her speaker observes in “All Abroad”: “The world may be as it used to be / but I am altered, I the eye that sees / all half known, half strange as if newborn / and fresh to its mortality.” This perspective invites readers into poems that dip into memory, and yet emerge as if the speaker were experiencing these memories for the first time.

Such perspective becomes cosmic in a poem like “Travelers” where an undefined “we” opens the poem into three levels of awareness. There is a nod toward what has already happened: “We came from the far side of the river / of starlight…” Readers then move into the present continuous, where the speaker is currently “[t]hinking about compassion. / A firefly in a great dark garden. / An earthworm naked / on a concrete path.” An undefined future is the focus of the third part of the poem, where the speaker reflects on the unfathomable: “I think of the journey / we will take together / in the oarless boat / across the shoreless river.” In removing the familiarity of this journey into the beyond, the speaker asks readers to trust her as a guide.

And indeed readers are invited into many of the speaker’s unknown realms. The section breaks bear elusive names like, “Meditations,” “Elegies,” “The Night Journey,” and “In the Ninth Decade.” Readers enter the speaker’s dreams, the waking hours, and the spaces in between. One such poem is the four-lined “Doze,” which reveals itself to be deeply complex despite its length and the simplicity of its word choices: “The little stone my mind / slips into the cloudy pond / and slowly settles in the silt / at the bottom of the water it could be forever.” The familiar in this poem is the human experience of being suspended between sleep and wakefulness. The unfamiliar is perhaps the uncertainty of the final, unpunctuated phrase “it could be forever.” Does the speaker mean that the mind becomes the silt at the bottom of the water, or that, temporally, the mind could rest in this space forever? Could she mean both? Is this “forever” something foreboding or something the speaker welcomes? The reader is left uncertain.

The speaker, too, is uncertain. Thematically, the unknown occupies a great deal of space throughout the poems. Even in a poem with the title “The People,” readers are unsure of the extent to which the “people [who] have begun to come into my dreams” are real. For the speaker, however, these people are ushers into the unknown she grapples with: “They talk together softly. / They know more than I know. / I think they come from home.”

The uncertainty of the poems, their dreamlike quality, is spun over readers again and again. The themes are accentuated by short, alliterative lines in which sound haunts just as much as the subject matter does. Whether it is autumn being spoken of as “gold of amber / red of ember / brown of umber / all September” or distant trains described as “[t]he great metal cattle of the train yards / …cows calling their lost calves / from farther and farther,” Le Guin expertly uses words to allure readers into a universe made strange and lovely by the familiar unfamiliar. Aging, then, becomes a circular movement as “[t]ime comes round / in a bodily way I do not understand.” And yet, we sense that not understanding is attractive to the speaker. It is an opportunity to recognize the pains of aging, as “the fat grey serpent of despair / wrestles with the thin tiger of my rage,” but also the joys.

In an intriguing way, So Far So Good frees the speaker from the traditional moorings of time and space. Like a time traveler, the speaker moves through memory into spaces beyond her understanding. The book that begins in the crab apple tree in the speaker’s yard ends, as its title indicates, “On the Western Shore” where the speaker discovers that “[e]bb tide is when to roam / the long beach alone / and find the jetsam / of the forgotten or unknown.” The wet shore that stretches far at low tide becomes a place in which life and death blend together as “[d]ark / of evening deepens into night / and the sea becomes sleep.” Readers who rest in these meditative poems are sure to find the voice of the beloved Le Guin just as intriguing as they did in her prose.