Home
»
Critical Essays
»
Spear’s Exploration of the Power of Understanding 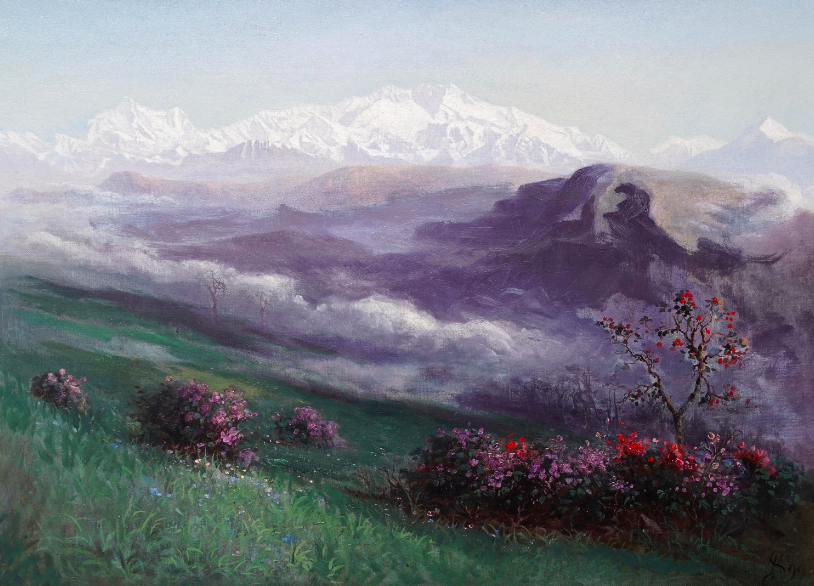 There are few pleasures quite like sinking into a novel that actually merits the adjective “spellbinding,” one in which navigation of known and unknown is so ideally balanced that everything familiar appears from an unexpected angle and everything truly new arrives as deftly as a memory recalled. Nicola Griffith’s Spear, out earlier this year, is just such a book, achieving the particular feat of refreshing the well-trod world of Arthuriana to create a waking dream that echoes most relevantly in our time.

Griffith’s slim novel retells—or rather remakes—the story of Percival through the character of Peretur, a young woman who seeks to become one of the famed knights of Arturus. In Spear, Griffith borrows freely from the many iterations of the tale and from Celtic folklore traditions, and does a fair bit of inventing altogether to great effect. It should be noted, and Griffith herself writes in “History, historicity, historiography, and Arthurian legend,” that the rich traditions of Arthurian legend and the historical realities of early medieval Britain are, in fact, much more diverse in every capacity than the nineteenth century revival of Arthuriana and the twentieth century’s veneration of the same would lead one to believe. The medieval world of northern Europe was not an exclusive bastion of whiteness, maleness, straightness, cisgenderedness, nor abledness, neither in its literature nor in its historical record, and so Spear, with its queer hero in a Caer Leon (Camelot) full of people from many places practicing their multiple faiths, should strike one as resonant rather than revisionist.

Though the novel’s historical underpinnings—the material realities of the island of Britain after the main force of the Roman Empire withdraws—are both sturdy and sharply drawn, magic is another cornerstone of Arthurian literature, and it is precisely the magical, fantastical elements of Spear that make the novel so seamlessly relevant.

From the tale’s first page, it is Peretur’s openness to the world that imparts, at first, important knowledge, and later, her incredible prowess: “In May, as the tree blossoms fall and herbs in the understorey flower, she will know by the scent of each how it might taste with what meat, whether it might heal, who it could kill.” The paragraph escalates through the seasons, each providing Peretur with what is needed, until the last: “And when the snow begins to fall once again, she catches a flake on her tongue and feels, lapping against her belly, the lake it was drawn from by summer sun, far away—a lake like a promise she will one day know.” The lake becomes one of the novel’s later destinations, where Peretur will meet Nimuë, ally and lover, but in the early pages, the lake is a recurring vision as she grows toward adulthood. The inviting mystery of it is made all the stronger by the firm material grounding threaded in and around the stuff of myth: on another day, “she was up the hillside where the sheep of the first steading were hefted, seeing but not seeing the ewes with well-grown lambs, because she was full of the remembered song of the lake, when a fly hurrying by brushed her arm and she knew in an instant that it was flown from the dirt caked around the legs of a ram—the ram charging her for coming too close to his ewes.” Both the lake and that instant of knowing the provenance of the fly belong to the world of fantasy, but this is a real landscape full of practical truths: here is the high, good pasture and here is a ram doing what a ram will do—and still it is a site for transformation, a crucial day in Peretur’s development:

Most days she would have run, would have leapt away and laughed and scolded the ram till he stopped, but today she was full of her own strength and dreams, and today she turned, took the ram by his horns, and forced him to his knees. And when he charged again, this time she took him by the horns and threw him to one side. Stood over him as he lay there, stunned, and said, ‘I have bested you in battle!’ And she had, a battle as fierce as any fought by knight and dragon.

This moment is private, witnessed by no one else beyond the sheep, and yet it is a core moment in Peretur’s becoming, as much as her clandestine gift-giving to the women of the steading: “When the young wife saw the flower, she turned it in her hand, smiled a private smile, and with lips like plums blew a kiss towards the wood. The girl dreamt of the woman for a month.”

The following winter, Peretur finds a dead man beneath the snow, one laid low by a fall from a horse, and from his body she gleans a shirt of mail, a broken-tipped sword, and two spears. These physical objects, along with her ram-besting bravura and her love of women, all attained in the same year, are talismans of becoming and central to Peretur’s journey. Her magic is indispensable, of course, but desire—desire to master these martial artifacts, desire to excel in contests against opponents, desire for physical and romantic intimacy, desire to engage in the world—is the catalyst to adventure. Peretur is not a hero who refuses the call, but one who rather goes out at every opportunity, listening and learning, with all of her senses.

Peretur’s magic is a subtle thing, couched as a way of understanding: an elm “whispers to her of how it is to grow from a sapling, to draw water from deep in the earth.” Not all of the magic in the novel works in this way. Peretur’s mother, Elen, in her fitful fear of being found by those who might take what she has, scries and watches and is able to cast a protective, camouflaging geas across their valley that is so powerful it threatens to hide home from Peretur as she grows and changes and interacts with the world beyond. Elen, like Myrddyn and Nimuë, is a sorcerer. Peretur is not.

Peretur goes on to communicate with animals—less like talking and more like intuition, a silent understanding. One day, she “followed the complaint from an old wether with worn teeth that this time perhaps the woman who herded them would leave them their wool until it was warmer. She was smiling to herself about the foolish old sheep, and sending it news of where it might find tender grass suitable for its mouth.” Not only does she understand the sheep’s experience and its physical reality, she accommodates it gently. Later, when she is deep in her quest to make a name for herself and facing battle against the Red Knight, larger and more well-equipped in every measure, in a river, her magic becomes an awareness felt through water and land: “With Bony’s first step into the river the knight’s memory of sharpening the scales around the shield rim unfurled in her mind like a scroll. When the knight kicked his own giant mount forward, its tail flicked at an alder at the water’s edge, and she knew from the scent of its bark that, hidden from sight, another two spears were propped against its trunk, waiting.” Through this mode of attention, she comes to victory and elevates her companions toward the same.

Such magic is presented in stark contrast to Myrddyn’s. Myrddyn, as Merlin is named in Spear, is one of many examples of the way in which Griffith’s work pulls together both what a reader is likely to know and what may be new in a compelling and profluent way. Merlin, of course, is a well-known figure in both the wide tapestry of English-language literary tradition and in popular culture, and readers of Arthuriana will be looking for him (especially the kindly mentor figure, complete with pointy hat and robes, made so ubiquitous by T. H. White’s 1938 novel, The Sword in the Stone). But from the first invocation of Myrddyn in Spear, readers must construe their expectations differently. Myrddyn arrives to the page second-hand: Peretur has just secretly helped a group of Arturus’s knights survive a bandit attack, and she is eavesdropping as Lance, Cei, Bedwyr—Lancelot, Kay, Bedivere—and others discuss both the attackers and their mysterious aid. Lance, whose name in this telling is actually Llanza and who hails from Astur, in Iberia, emerges from the conversation as calm, reasonable, and most observant; he is also the most cautious and speaks with quiet authority about what he’ll say to the king:

“Perhaps I’ll suggest we should not yet reclaim the Valley of the Tywi. The whole thing has the smell of the uncanny.”

Bedwyr touched his chest where the cross hung out of sight. “That’s business of Myrddyn.”

Lance nodded. The girl could tell he did not like this man whose business was the uncanny.

In this encounter, and indeed throughout both Spear and Arthurian legend writ large, Lancelot is the best of Arthur’s knights, and by this point in the text, Peretur’s intuition has only led her rightly. So readers are primed to be wary of Myrddyn, to mistrust him, because Llanza mistrusts him and Peretur notes that at once. The novel bears this out: Myrddyn, we learn, has abused both his sister—Peretur’s mother—and his protege Nimuë in his quest for the four treasures of the Tuath—the sword, the stone, the cup, and the spear—and the power they bring. Nimuë, in trying to caution Peretur, says, “You have thrown out a signal bright enough to draw any who can hear and see; now they will be clamouring to enter you, to know you, to have you as a bee might climb inside a flower. And like a bee they will strip you bare and leave heavy with all that makes you who you are.” In those words, too, are the echo of what Myrddyn has done to her: a rape of the mind, a use unconsenting, deceitful, and wholly selfish. It is the opposite of understanding; it is control. And as the novel’s central antagonism—perpetrated by both Myrddyn and Manandán, one of the Tuath who is trying to reclaim the cup from Peretur’s mother—it is eternally relevant.

In the midst of so much state oppression in the USA—the proposing and passing of bills that are anti-woman, anti-trans, anti-immigrant, anti-queer, and hostile to people of color, poor people, disabled people, and the environment—the fact that Peretur’s power is rooted in understanding others’ emotional and physical experiences is a striking act of resistance. It is an act of resistance within the sphere of Arthurian mythology itself, a way to remake that space and liberate it for a larger and more inclusive community, and it is an act of resistance that moves beyond the pages of the novel. Oppression gains strength from its refusal to understand others, from its insistent primacy of self-interest. Oppression is incapable of imagining what it might be like to be someone else. Nicola Griffith’s Spear, with its sparking and immersive prose, stands, with Peretur, in defiance of such abuses of power, offering a tale that is a heady and healing draught.