And then I told all my friends about it.

“Did you forget how to sound out the big words?”

“Have you resorted to a career as a babysitter?”

“You’re not reading to your dog, are you?”

Um, nope, nope, and my dog prefers girthy novels, thank you very much.

“Then why are you reading so many children’s books!?” demanded my friends.

Um. Well. You see, unlike Caitlin O’Neil, I do not actually have children. So what’s my excuse?

(“That’s your excuse for everything,” my friends complained. But never mind them.)

As Caitlin suggests, children’s books can teach all writers valuable lessons. For me as a poet, though, they offer more than just lessons: they offer validation.

In thinking about children’s books, I’ve realized that my favorites can be divided into two categories—we’ll call them “storyish poems” and “poemish stories.”

Let’s take a look at a representative work from each category: in the storyish poem corner, Jon Klassen’s I Want My Hat Back, and in the poemish story corner, Matthea Harvey’s Cecil the Pet Glacier.

Cecil the Pet Glacier tells the story of a “normal little girl” named Ruby Small whose “not-normal-at-all” parents drag her on a family vacation to Norway, where she unwittingly accumulates a timid baby glacier as an “ice-pet.”

Cecil is definitely written in prose: it has long (for a children’s book) blocks of paragraphed text, sentences of different lengths and multiple clauses, and varying verbs/adverbs appending its dialogue (i.e. not only “said” but also “said severely,” “asked,” “answered,” “muttered,” etc).

The story itself has a beginning-middle-end arc, over the course of which the protagonist grows and changes. The supporting characters are well-characterized and alive. If this were for grown ups, it would totally be a novel.

But Cecil also has some distinctly poemish qualities, many of which are shared by other children’s books (even those not written by poets). Sound and rhythm are playful and intentional: the Small’s destination in Norway is a town called Horfensnufen;  Ruby’s father, a topiary gardener, turns “oaks [into] owls, pines [into] platypuses, maples [into] marsupials.” 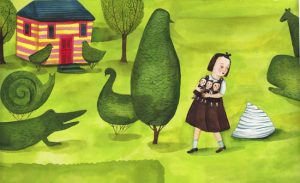 There’s also something poemish about the overabundance of minute, ridiculous details in Cecil:

Inside, Ruby would pray that no one from school would walk by. She’s pull the curtains shut and serve milk and bran muffins to The Three Jennifers, her identical dolls, who were dressed like her in brown pinafores, plain black headbands, and brown shoes with the shoelaces triple-knotted.

For one thing, Cecil ate pebbles. Every night the Smalls would put a plate of pebbles on the floor and Cecil would glide over it and absorb them. Finicky like a cat, he liked white and black pebbles but wouldn’t eat the gray ones.

The simultaneous excessiveness and precision of these absurd details makes them feel somehow imagistic, aesthetic—more poetic, in other words, than novelistic.

So too is the fact that Cecil’s intended audience—i.e., young children—are not necessarily going to process these rich, mischievous, detail-loaded sentences, let alone whole paragraphs full of ‘em. If Cecil were 100% story, missing these kinds of details might be discouraging or confusing. But in fact, the book functions more like a poem: an aesthetic, tone-driven experience meant to be read over and over again. 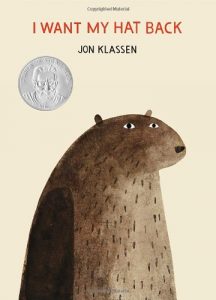 While Cecil is lush and chock-full, I Want My Hat Back is a spare and deceptively simple book about a bear who has lost his hat. The plot consists of the bear asking various animals if they’ve seen the hat. And that’s pretty much that. No Horfensnufen, no topiary, no adverbs.

Hat is storyish—or perhaps fable-ish—in both its narrative progression and its cleverly hidden moral; Klassen presents the action, but it’s up to the readers to judge the characters’ motivations and behaviors. The straightforward language yields very few clues, and the tone is utterly deadpan. The illustrations are crucial to understanding Hat’s nuances and twists—a literal adherence to the fiction workshop maxim of “Show Don’t Tell.”

But the genius—and the humor—of Hat is essentially poetic. Visually and semantically, the extreme economy of language and abundance of white space make Klassen’s sentences look and feel more like lines. He uses these lines to set up an anaphoric pattern—for the first few pages, the bear asks an animal if they’ve seen his hat, the animal answers, and then bear responds, “OK. Thank you anyway”—and then derives great payoffs from breaking it: 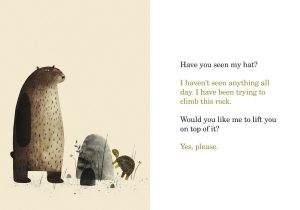 And Hat is almost perfectly a sonnet, complete with octave, volta, and a twist in the final couplet:

[Deer asks Bear what’s the matter.]
[Bear has epiphany: RABBIT stole his hat!]
[Bear returns to Rabbit: “J’accuse!”]
[Bear and Rabbit have a stand off.]
[Cut to Bear, wearing his hat. Rabbit is nowhere to be seen.]
[Squirrel asks Bear if he has seen Rabbit. Bear lies.]

But it’s also for kids; it’s accessible. It’s unlikely to be labeled esoteric or pretentious or “dead.”

And herein lies the validation: I love children’s books is because they do what poetry does—but they make it look fun. For everyone.

Children’s books validate my poetic imagination—which sometimes seems rather inadequate, especially when compared to the kind of imagination capable of thinking up girthy novels. And unlike girthy novels, children’s books are short. You don’t have to wait very long between re-readings. Already knowing the plot twists doesn’t diminish the joy of the ride.

So if you’ll excuse me, I need to go find my hat.