Home
»
Reading
»
The Best Short Story I Read in a Lit Mag This Week: “Stamp Fever” by Colette Inez 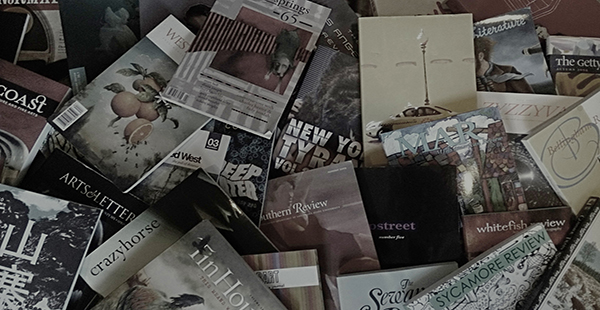 What constitutes the difference between delusion and imagination? Where does one end and the other begin, or are they related at all? Colette Inez explores these intersections in her story “Stamp Fever” (The Georgia Review), from the perspective of a young boy struggling to overcome family difficulties.

Our introduction to the young protagonist comes when he has received a gift from his father, a huge box of “of more than a thousand stamps from around the world.” Inez makes clear the fourteen-year-old boy’s delight through her brisk, busy descriptions:

“Plain everyday offerings of flags, past U.S. presidents, and state capitals were his plentiful, but his favorites were African, and included sumptuous flora and faun, Gold sculptures of Benin, and had the heroic faces of national leaders…”

But amidst the boy’s joy at the gift, Inez introduces the conflict.

“[The stamps’] intensely bright touches of colors contrasted with the off-white walls and heavy brown furniture, the tan-fringed matching lamps and the gray worn carpet of the one-bedroom apartment he shared with his mother. She immediately complained about the gift: ‘It’ll make a mess, all those little pieces of paper.’ … The boy feared his mother’s disapproval, the sullen moods, her fits of silence after he failed to hang up his clothes or polish his shoes. ‘You’re becoming like your father’ was the ultimate affront.”

The boy is in a bind. He’s ecstatic about the stamps, but his joy reflects the nature of the man whom his mother doesn’t like and no longer lives with. She’s obsessed with order, and brooding, and her home reflects that. But before we can dismiss her as a simple antagonist, out to spoil this young kid’s fun, Inez helps us to see her much more heroically. Not only is she a single parent who works to make ends meet so as to best raise her son, she’s clearly sacrificial. “The boy was given the bedroom while his mother slept on a pull-out couch in the living room.”

Nor does she take away the stamps, or the various other treasures he’s collected. Though boy’s father lives in a separate city, he’s not disengaged; we discover that the father, though quiet, expresses “himself in the purchase of generous gifts” like the stamp collection.

“…on the boy’s desk sat a small Underwood on which he typed his high school assignments. He treasured the Gilbert chemistry set with its powders and flasks, its mortar and pestle for grinding minerals, and he made full use of the Book of Knowledge, an encyclopedia whose volumes crammed the book shelves of his narrow room.”

No household is perfect. But we begin to realize that this boy is very well taken care of. As this revelation subverts, Inez recapitulates the mother’s obsessiveness into something less dangerous:

“One day his mother wagged her finger. ‘Your room is a mess. I will have to speak to your father,’ she said, an idle threat he shrugged off.”

She’s a concerned mother, her concern betraying love, and it’s in no way debilitating—shown by his ability to shrug it off.

This shift in understanding of the family dynamics makes way for the final move Inez makes. The “Fever” of the title sets in, and the narrator begins to experience his home and life there in the majestic light of the stamps. Mother, who usually wore plain clothes, all of a sudden wears “a muumuu that showed a run of zebras kicking up dust.” Dinner, instead of the usual boiled potatoes and “gray chops,” was roasted green parrot, with kola nuts and oranges “artfully arranged on his dinner plate.”

“When his father came to visit … he was dressed as an admiral, sporting spiffy white with gold buttons and epaulets. A cap with visor and gold braid sat on his head at a rakish angle. The boy recalled a postage stamp of Artcic explorer Admiral Byrd…”

So what are these visions? What is this fever? Delusion? Imagination? Depending on how you answer the question, the story is either a tragedy or a triumph. Inez doesn’t give a firm answer. Instead, she ends it with the mother, father, and son seated on the apartment, stamp album open, each sighing “at the world’s variety and beauty.”

Sure, there’s clearly wish fulfillment at work in his imaginative flights—he wants his parents back together. But there’s also knowledge and beauty, the quest for it and the delight in it, which are all wonderful balms. The boy will be okay, as will his parents.