Home
»
Uncategorized
»
The Best Story I Read in a Lit Mag This Week: “Letters Between Tortoise and Hare” by Brandi Wells

I’ve been in a bit of a slump lately, chaffing against my nine to five office job, weary of the routine and cadence of every week and weekend. It’s spring in New York, which doesn’t help, since all anyone wants to do is go sit in the sun somewhere with the company of a few friends, something cold to drink, and a snack from a nearby food truck. It’s a normal fatigue that will pass soon enough, but in the meantime I’ve been trying to shake myself out of it in the small ways that I can. 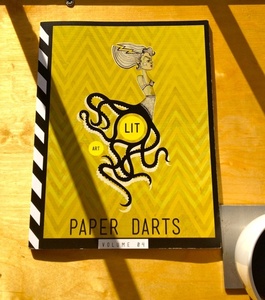 And I seemed to have a stroke of good luck: the other day on my morning commute, I found Brandi Wells’s story “Letters Between Tortoise and Hare” in Paper Darts. The experience of reading it felt a little like being told to take the day off and go hang out in the park. The story surprised me—it’s energetic and fresh, with language that is simple and a premise I wasn’t expecting.

As you may have guessed from the title, the story is a retelling of the fable “The Tortoise and the Hare” and is made up of a series of ten short letters. Wells reimagines these characters in a possibly abusive romantic relationship, one where Hare seems to be trying to make a new life and Tortoise follows, at first innocently enough, but eventually Tortoise’s pursuit of Hare becomes sinister and controlling.

At only 500-some words, “Letters Between Tortoise and Hare” must do a lot of work with little space, and Wells succeeds. Earlier this week I read an essay by Cynthia Newberry Martin published in Brevity about writing good sentences. As I reread “Letters,” I admired the way Wells is able to develop her characters by writing short, strong sentences that do a lot of what Martin mentions (and more). She uses detail, unusual repetition, and vagueness to her advantage, and I was struck by all she’s able to accomplish in just the first sentence of the story.

When we approach the page, we’re ready to believe the events of Wells’s narrative because we’re already set up for the fable—we know the plot, we know what to expect: talking animals, competition. The first sentence begins: “Dear Tortoise, Again, I feel sickness.” This line stays true to who we might imagine these characters to be. They’re animals, sure, but they’re animals writing letters to one another, so we know right off the bat that they are not animals as we understand them (and they’re not human either).

The wording of Hare’s introduction to his or her state of well-being isn’t quite the way you or I would put it. Hare doesn’t write, “Again I feel sick” or “I’m sore all over” or “My rheumatoid arthritis is acting up again, pass the extra strength ibuprofen.” Instead, Hare says “I feel sickness,” a sentence that treats feeling ill as if it’s an unseen presence in a room rather than an experience of the body. The phrasing is off, just slightly, and for these characters who read as if they don’t exist in one camp or another—human or animal—the phrasing reflects what we imagine to be true about them knowing only the title and (for most of us) the fable. They’re intelligent, able to think and feel, but unfamiliar enough to feel distinct and separate. We want to read on.

The first word of the letter—“again”—reveals that this exchange is a part of an ongoing conversation in an established relationship. These characters have spoken and written before. They know enough about each other that Hare is comfortable speaking openly about being ill without self-consciousness. With this one word we know there’s intimacy.

Hare opens the letter without introduction or pleasantries. We know nothing about Hare, but immediately this sentence makes us feel the presence of Hare’s history, an entire life that’s been lived before we showed up. Being able to feel the history of a character, I’d argue, is not the same as just receiving details about a character’s life. Feeling a story behind the one we’re given, the story that came before, has less to do with the quantity of information about a character and more to do with both the narrative and character’s treatment of it.

Here, we know that the feeling of sickness has happened previously. To open a letter with this line exposes the weariness and exhaustion that often accompanies chronic illness. Hare already feels rounded, a character that takes up space in the narrative and brings along the tension and mystery that accompanies someone with a past we’re allowed to glimpse, but only briefly.

Wells’s writing is economical. She’s able to convey so much in a limited space, and the first sentence is a good example of the effect she’s able to create throughout the whole piece. The day I read “Letters Between Tortoise and Hare” for the first time, I went home after work and started a new draft of a story. So head over to  Paper Darts to check out the story. Hopefully reading it will energize you the way it did for me.