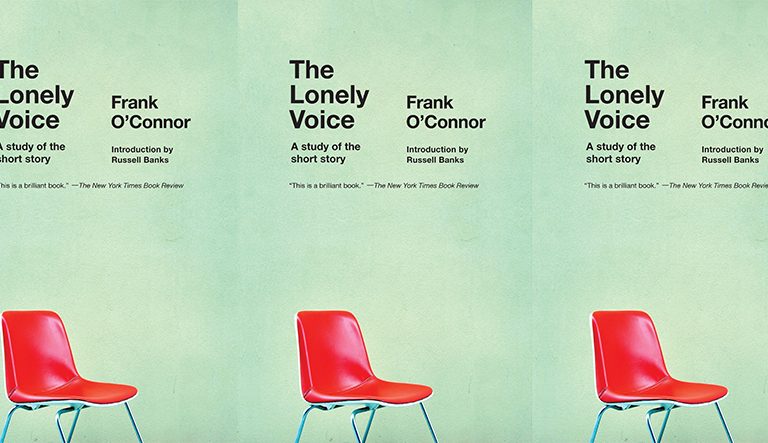 I’m far from the first to suggest that, in spite of the form’s name, brevity should not be considered the defining feature of the short story. As Frank O’Connor contends in his seminal 1963 study of the form, The Lonely Voice, “[T]he very term ‘short story’ is a misnomer. A great story is not necessarily short at all, and the conception of the short story as a miniature art is inherently false.”
If not its length, then, what are the short story’s defining features? On this issue, O’Connor is less clear than I’d like him to be. His long, meandering, terribly messy, and utterly engrossing preamble to The Lonely Voice returns again and again to the concepts of “The Little Man” and “submerged population groups.” The former is a type of character who exists at some isolated remove–social, moral, or physical–from society. (O’Connor argues that this character type has both its origins and its apotheosis in Gogol’s Akaky Akakievich from “The Overcoat.”)
The latter concept, meanwhile, remains nebulous–it is “a bad phrase which I have had to use for want of a better,” O’Connor admits–but would appear to denote the story’s stand-in for the novelistic hero. Whereas the novel has heroes, characters with “some relationship–hostile or friendly–with society as a whole,” whose conflicts play out against a backdrop of “normal society,” the story has “outlawed figures wandering about the fringes of society.”
“As a result,” O’Connor continues, “there is in the short story at its most characteristic something we do not often find in the novel–an intense awareness of human loneliness.”
Call this O’Connor’s sociological distinction between the short story and the novel.
Acknowledging this sociological distinction leads O’Connor to a corresponding ethical distinction, as well. “[A]cross the abyss that separates me from them,” he writes, referring to the characters in short stories, members of submerged population groups, “I seem to hear the voice of Gogol’s copying clerk, crying, ‘I am your brother.'” In O’Connor’s reckoning, then, the story is a sort of empathetic engine. It takes submerged population groups–the Akaky Akakieviches of the world–and finds within them a degree of universality.

There’s something tantalizing about this line of thought, isn’t there? Like O’Connor, I want to move beyond length. I want to be able to talk about long stories and short novels; indeed, my instinctive sense of both forms demands this distinction. “The Love of a Good Woman” by Alice Munro and Heart of Darkness by Joseph Conrad may not differ too terribly much in terms of word count, but the former clearly seems to me to be a long story, the latter a short novel. (The longest short story I’ve ever written clocks in at a little over twenty-two thousand words in its latest incarnation. It is not a novella.)

So before we move to contradict O’Connor, scanning our bookshelves for novels about submerged population groups or story collections that place characters smack dab in the middle of teeming social milieus, let’s take a moment to appreciate what The Lonely Voice accomplishes with its dual sociological and ethical distinctions. Isn’t it true that the story, in general, is intensely focused on the individual in a way that the novel is not? And isn’t it also true that the novel (for the purposes of his preamble, O’Connor seems to be considering sweeping social narratives, from Pride and Prejudice to War and Peace to Freedom, as representative of the form) tends to be concerned with society and with depictions of the way we live now, in a way the short story is not?
There isn’t even such a concept as the Great American Short Story. O’Connor’s two distinctions might explain why not.
Allow me to extend a metaphor. The novelist commands a bank of floodlights: she can light the entire stage. The audience may see one character or set of characters more clearly than others, but they are still able to gauge the movements of those characters against the movements of the other figures onstage–society. The story writer, on the other hand, shines a single spotlight onto a darkened stage. We may clearly see only a single figure, and maybe only a part of that figure. What happens elsewhere onstage can only be hinted at through sounds and shadows and the actions of the lone figure. Here, in essence, is the short story’s loneliness.
Wait a second. A bank of floodlights, a single spotlight–I’m talking about size again, aren’t I? Try as I might to avoid it, I’m still talking about length.
* * *
Ultimately, O’Connor himself does not give a fair shake to the theories he lays out in his preamble to The Lonely Voice. His ideas essentially go untested in the chapters that follow, due to the indelicate ad hominem style he adopts when discussing particular authors. Besides leading him into unverifiable and utterly beside-the-point generalizations (“As a man, Turgenev had one personal problem which he illustrates endlessly in his work”), O’Connor’s habit of using authors’ subject matter as windows into their psychologies sometimes leaves him reasoning in circles. For example, a certain story of Chekhov’s is deemed “characteristic” of his work because it fits the psychological portrait O’Connor is presenting of Chekhov the man; meanwhile, O’Connor considers his psychological portrait of Chekhov to be apt because it is supported by such “characteristic” stories.
However, the real problem with O’Connor’s attempt to define the short story without predicating his definition upon length is not that his definition goes untested, but rather that there is good reason to suspect that his definition would not pass any test to which we might put it.
I’ve tried to illustrate the essential flaw in O’Connor’s argument above. Even if we accept O’Connor’s sociological and ethical distinctions between the story and the novel at face value, we’re still going to end up talking, in one way or another, about length. This is because, throughout his preamble to The Lonely Voice, O’Connor is consistently begging the question. His two distinctions presuppose that the short story is short and the novel long, even as he tries very hard not to acknowledge this fact.
Granted, O’Connor does admit that stories are generally shorter than novels. In my estimation, though, what he gets wrong is the relationship between the story’s length and its other characteristics. “[I]n the short story,” O’Connor writes, “the length is given by the form.” In other words, he is contending that the existence of his sociological and ethical distinctions requires that the story be short, the novel long.
In fact, however, it’s the other way around.
* * *
“Length is only part of the equation,” I wrote last week. “The short story is not only short.” With this thought in mind, pausing to study O’Connor ought to suggest to us two things.
First: Length is more or less inescapable in this discussion. It’s difficult if not impossible to describe the short story minus the “short”; size is an essential feature of the form. The only convention of length that a novel has is that it be “long enough”; the short story operates under a built-in constraint from which the novel is free.
Second: The richness of O’Connor’s two distinctions, as well as their apparent explanatory power, indicates just how woefully inadequate the statement “short stories are short” really is. In distinguishing the short story from the novel, we can talk about length all we want, but we will not be getting at the heart of the difference. In fact, in the case of “The Love of a Good Woman” versus Heart of Darkness, we’ll only be dancing around the distinctions that really matter.
And (to return to the origins of this post in Part One) unless we can name the truly important distinctions between the short story and the novel, we are likely to continue asking the wrong questions–and providing the wrong answers–about who the short story’s audience is, how the short story ought to reach that audience, and just what place the short story really has in an increasingly commercialized literary landscape.
* * *
Next week, I’ll be exploring the differences between the novel and the short story by examining a common book reviewers’ tic: comparing highly successful, complex, or otherwise ambitious short stories to novels. What can this practice tell us about the nature of the form itself?
This is Greg’s sixth post for Get Behind the Plough.
Images: 1 and 2