Home
»
Critical Essays
»
The Middle of Nowhere in a Comic Pane 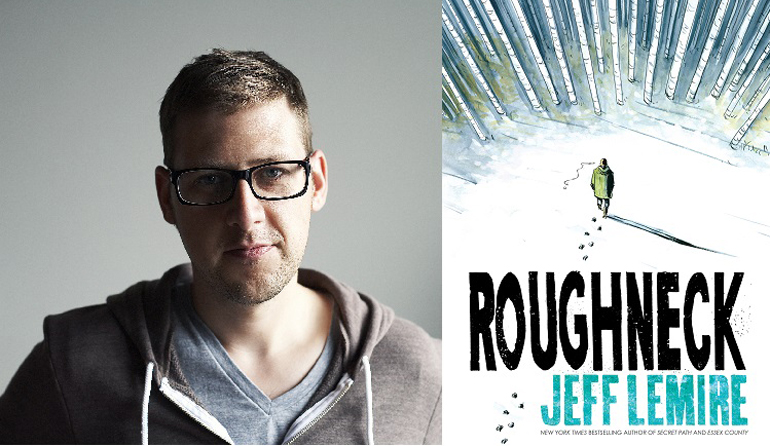 The plot of Jeff Lemire’s most recent work, Roughneck, will ring familiar for many readers. The main character, Derek Ouelette, is a former professional hockey player who has returned home to a small Canadian town. When we meet him, he’s spinning his wheels in the swamp of alcohol, verging on depression and disaster, until a long-lost sister who ran away to the city shows up at his doorstep, trouble close on her heels. Archetypal: a story we’ve seen in film, in literature, on television.

But Roughneck tells this old story in a way you probably haven’t seen before—it’s a graphic novel. Lemire is a cartoonist with a decade-long career working for both comic books and his own individual projects. In 2008, he released the Essex County Trilogy, a collection of three linked “graphic short stories” set in Essex County, Ontario. The stories deal with generational trauma and mistakes that can’t be forgiven, each multiplied by the characters’ isolation—isolation imposed both by geography and by the characters themselves. Essex County won multiple awards from both literary- and comic-oriented organizations.

Roughneck captures well the life of someone slipping into alcohol-imposed self-hatred. One of the first scenes with Derek involves him watching a young hockey team practicing in the ice rink where he lives before ducking out, saying it was “too loud.” Next scene: he ducks into a bar and immediately asks the bartender to turn the television’s volume up. Derek’s self-hatred is mirrored by the characters’ attitude towards the town, Pimitamon, itself, referring to it as “The Pit.”

Self-hatred, alcoholism, small-town deprecation. Roughneck hits all the rural notes. When a character has a run-in with Oxycontin, the reaction is to immediately blame it on outsiders. “All the kids are getting it from down South,” someone says. And when conflict erupts, the solution is to go even further out into the woods to a hunting and trapping cabin, away from the small town that’s away from everything else. The sister from the city immediately calls the cabin a dump.

Roughneck adds another layer on top of its rural setting, a layer readers might be less familiar with. Derek and his sister are half-Native Canadian, and their relationship (along with the town’s) to their indigenous culture looms like a shadow, popping up only briefly and in hints. Their mother attended a residential school, one of many religious institutions set up to indoctrinate Native culture out of Native children. Derek is fleetingly aware of how isolated his mother must’ve been and of the relationship between her cultural isolation and his father’s abuse towards his mother. Unsurprisingly, as Derek works his way toward inner peace in the narrative, he also becomes more in touch with the Native world. A friend of his mother’s takes him out hunting. Derek asks the man if he has any coffee, and the conversation goes: “No coffee. Real Indians drink tea in the bush.” “But I’m only half Indian.” “So only have half a cup.”

Lemire’s art style is especially effective for his subject matter. Roughneck uses a muter color palette, working almost exclusively in shades of blue and gray. The lack of color is oppressive and a constant reminder of the snowy wilderness just outside the comic panes’ edges. When needed, though, the work explodes with color. Lemire deploys these explosions judiciously and effectively, and they never cease to surprise, nor does the accompanying emotion.

Even when Lemire was working for the mainstream superhero comic publishers, he dealt with many of the same themes found in both Roughneck and Essex County. He was one of the main writers for the Old Man Logan run of comics, a short series that was loosely (very loosely) the basis for this year’s film, Logan. In it, America has become a mostly barren wasteland, one in which the remaining cities are hubs for evil, and the only peace Wolverine knows exists on a farm, a farm where he’s trying to escape from both his past and everything past the farm’s boundaries. And when he sets foot in the city, he’s out of place, uncomfortable, and conspicious.

When Derek asks his sister about her time in the city as a runaway, she says it was “big and scary, but also exciting at first.” Like many books with a rural setting, Roughneck portrays geographic isolation as simple compared with cities. In this simplicity, people can find a sort of spiritual purification, a path to contentment with self. It’s an age-old tale, but Roughneck brings a fresh, vibrant portrayal, with both its format and the specifics of its content adding meaning to its powerful story.