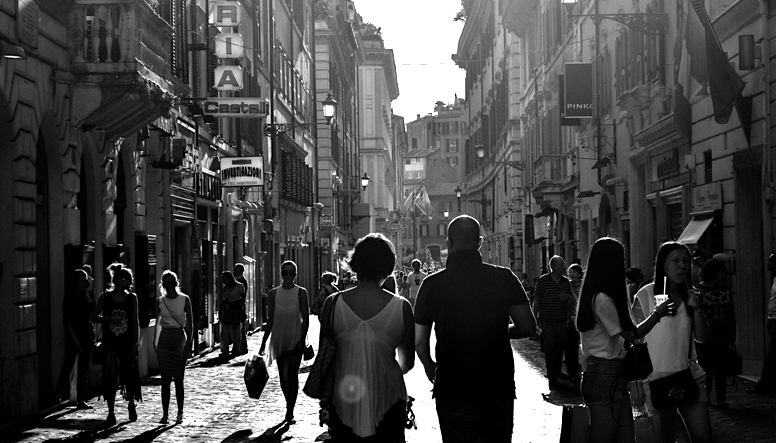 Wandering, particularly within urban spaces and typically in the romanticized, intellectual mode of Baudelaire, is a trope that many writers return to. It seems that so much can be seen and felt on these isolated treks. I do my best thinking while in motion—ever since I was a child, I would slip into a shifted mental plane when moving where stories would come more easily than when I sat motionless in front of a blank sheet of paper. As I grew older, however, and found myself walking city streets on evenings when the days were short and cold, I would often set out, only to find myself the lone person on the street. R.O. Kwon recently wrote in The Paris Review about the reality of being a woman walking alone: choosing certain streets over others, parking as close to your destination as possible, and sometimes, alternatively, paying for a cab when where you want to go is within walking distance. The concept of “freedom of movement” assumes that one’s body is accepted in the space it wants to move through, and that one’s body has a safe place to rest once it is done with its wandering. On the other hand, for some, wandering is less an activity for leisure or intellectual exploration than a means of survival.

In her aptly named autobiographical-fictional work, Hōrōki (often translated into English as Tales of Wandering), Japanese author Fumiko Hayashi describes her itinerant life throughout early twentieth-century Tokyo, her constant movement propelled not from a desire for creative fodder for her writing, but due to basic economic necessity. The book is an autobiographical account of the main character’s life as she moves from one temporary job to another while writing on the side. Along the way, she describes her relationships with other women in similar situations, as well as her passionate flings with men also struggling in poverty, many of whom have an artistic calling that remains unfulfilled. These figures circulate through Tokyo, fulfilling temporary needs as waitresses, household servants, and manual laborers, but are never given the opportunity for steady work to halt their constant movement.

The operative term in the original title, hōrō, means wandering, but when attached to other characters can also mean vagabond, vagrant, or even drifter. The economic pressure to wander is therefore apparent in the title itself, which has also at times been translated into English as Diary of a Vagabond; the line between someone who simply wanders and someone who is considered a “vagabond” is apparently quite thin. Calling someone a wanderer is generally perceived as a positive thing and having wanderlust is equally idealized: a wanderer is someone curious, adventurous, unafraid to go off on their own path. The vagabond, however, is a figure of derision: if they only stopped moving and settled down responsibly, then they would no longer need to wander.

Hayashi’s work reveals a mind deeply curious and adventurous, taking advantage of what it saw as Hayashi moved from one job to the next. A quick glance at her work reveals the creative impact that her wandering had on her writing. Formally, the text itself smoothly blends the diary form with snippets of found art (songs she heard on the street, pieces of conversations lifted out of context as she passed by, graffiti she sees in bathrooms), as well as with pieces of her own poetry. The book enacts the same wandering that Hayashi experienced in her life, moving fluidly from genre to genre in order to make sense of the world. In Hōrōki there is a blend of survival and intellectual exploration, of coming to terms with what it means to be in a precarious world while creating something beautiful out of life circumstance.

The economic distinction between a wanderer and a vagabond highlights an implicit luxury in wandering. The wanderer has the economic means to wander without worrying about bills, or the wandering itself is bankrolled. Joan Didion’s essays—particularly those pieces included in Slouching Towards Bethlehem, many of which were written for magazines in the late 1960s—demonstrate this. Unlike Hayashi, Didion was paid to wander, and to write about her wanderings. As she notes in the preface to Slouching, “I was asked to go up to the Carmel Valley and report on Joan Baez’s school there; I was asked to go to Hawaii; I think I was asked to write about John Wayne; and I was asked for the short essays on ‘mortality,’…and on ‘self-respect.’” The resulting essays collected in Slouching are a menagerie of impressions; in this way, it is similar to Hōrōki. Both books stemmed from things writers witnessed while out in the world; one writer, however, had the privilege of financial backing and the certainty of readership, while the other jotted her thoughts in a diary without the promise of any financial compensation.

As a result of this economic privilege, Didion’s wandering is imbued with purpose. The book’s titular essay, one of the most striking pieces in the collection, hints at this controlled wandering: a movement guided by a vague sense of direction. Hayashi’s wandering, too, was driven by a goal, but each women’s intention was different, resulting necessarily in different end results.

These writers’ wandering experiences themselves were different as a result of economic disparity. While both books drew beauty from descriptions of urban space and those who occupy the periphery, each wanderer approached what she saw from a different perspective. Didion, on assignment, can step into a precarious world and then readily step back out. There is less at stake for a wanderer like her, who does not occupy the same space as her subjects. In contrast, those individuals populating Hayashi’s book are people like her, experiencing the same trials in which she found herself. Like the individuals in early twentieth-century Tokyo of Hōrōki, Didion’s own “vagabonds” are themselves closely linked to a certain space and desire a different life from the ones they were allotted. Didion moves amongst these individuals, druggies and young run-aways, as an outsider. Even if she can empathize with their experience, and even when she is able to relay that experience vividly to readers, she can always return to her more privileged life after the assignment wraps up.

Not only is she able to move more freely in these spaces based on her economic means, she brings the trials and tribulations of these young people to readers who are equally as removed from this reality as she is—an ability that is both a problem and an opportunity.

Olivia Laing’s The Lonely City, which drifts between memoir and art criticism as the author wanders throughout New York City and among artist archives for research and as she seeks to explore her loneliness in the wake of a broken relationship, feels, in its intense focus on other artists’ lives, like a form of respect. Rather than imposing her own internal world onto marginalized artists, she dedicates chapters to their work and their memory, leaving her reflections for other chapters. This textual wandering, between and within research and memoir, parallels her physical movement, which itself sparks insight. Something about wandering in New York, with its own periphery-dwellers and “vagabonds,” seems to resonate with Laing.

Laing, as a wanderer, occupies a position of both privilege and necessity. She exists in the metropolis working on research while also living precariously, experiencing eviction and jumping from one temporary living situation to the next. She is an outsider, having moved recently from London, and feels rootless and alone. Ultimately, as she visits certain areas of the city to get a better sense of the world occupied by artists like Andy Warhol and David Wojanarowicz, what she is left with is an equally deepened sense of herself. “Loneliness is personal and it is also political,” she writes. “Loneliness is collective; it is a city.”

Not all wandering is equal; not all bodies can move easily through all spaces. While there is always the possibility of danger in wandering, there is also, however, a benefit to changing our surroundings and seeing a world beyond what we are used to. In the best cases, wandering opens us up to possibility, to becoming more aware of our own hang-ups, to empathy towards those who occupy a place different from our own.