Home
»
Critical Essays
»
The Nearness of the Moon 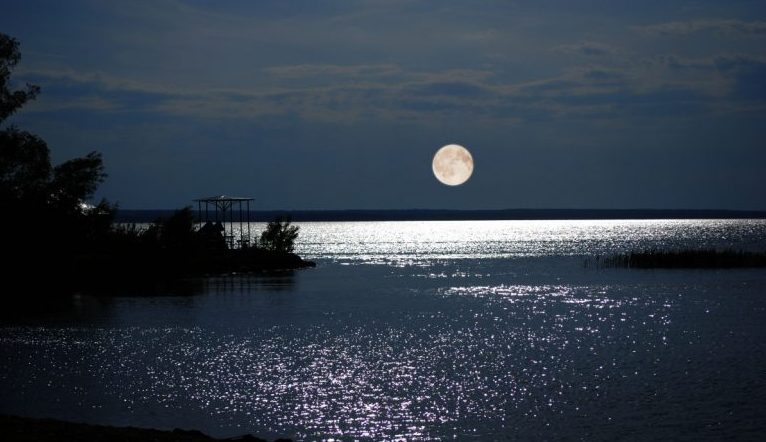 It can sometimes feel like a poetic cliché to even look at the Moon. It seems almost too easy a way to summon cyclicality, illumination, mystery, and even romanticism. The Moon is always shifting through its cycles yet always present and the same; it serves us as a source of light but is actually reflecting that light from somewhere else; every once in a while, an eclipse renders it strange; meanwhile, it has a side that always stays hidden, with an air of mystery almost always categorized as feminine. Italo Calvino, however, uses the moon and other celestial bodies playfully in his short story collection Cosmicomics.

“The Distance of the Moon” is perhaps Calvino’s most well-known story from Cosmicomics, a set of whimsical stories chronicling a history of the cosmos loosely based on scientific facts. The original set of twelve was first published in 1965, just four years before the Moon landing. Each story begins with a short nonfiction portion, as if invoking a Muse, before diving into the realm of imagination. “The Distance of the Moon” begins with the fact that the Moon’s orbit is gradually moving farther away from the Earth; in an interesting phenomenon of reciprocal cause-and-effect, this change is actually a result of the tides, which are themselves caused by the Moon’s gravitational force acting upon the Earth. Building from lineages of both scientists and mythmakers, Calvino draws upon these facts about the Moon’s distance and brings them to their (il)logical extreme.

In William Weaver’s 1968 translation, he opens the fictional portion of the story with an exclamation: “How well I know!—old Qfwfq cried,—the rest of you can’t remember, but I can.” The unpronounceable narrator, Qfwfq, dives into his story as if directly responding to the nonfictional epigraph that came before. In this way, the scientific portion is not so much a citation as it is part of an ongoing conversation about the nature of things. Calvino does not exactly undermine the scientific aspect of it; instead, he’s riffing on the spirit of curiosity, of scientific inquiry and stretches of inference.

The overall premise of the story is that long ago, the Moon drew so close to the high tide that you could row out in a boat and leap across the gap to safely explore the Moon’s surface; we gradually shift more and more into this realm of the fantastic as Qfwfq describes the process of harvesting the scaly, fish-smelling “moon milk” encrusted on the underside of the moon, which is composed of biological debris that floats up from the Earth and gets stuck there. Meanwhile, there is “always a flight of tiny creatures—little crabs, squid, and even some weeds, light and filmy, and coral plants” that either stick to the moon as well or else float in the in-between space, caught between gravitational forces. In a way, through gravity instead of reproduction, they are re-enacting the gradual movement of life out of water (a different Cosmicomics story, “The Aquatic Uncle,” is entirely devoted to playing with this evolutionary narrative).

In describing this, Calvino works with perspective using a cinematic playfulness that remains roughly faithful to the way gravity works while still being entirely impossible:

Seen from the Earth, you looked as if you were hanging there with your head down, but for you, it was the normal position, and the only odd thing was that when you raised your eyes you saw the sea above you, glistening, with the boat and the others upside down, hanging like a bunch of grapes from the vine.

These de-familiarized laws of attraction also play out within a lopsided love triangle. Qfwfq is attracted to his fellow traveler Vhd Vhd, who has a crush on Qfwfq’s cousin, “the Deaf One,” who only has eyes for the Moon herself. Qfwfq registers this similarity between celestial and corporeal gravities; he describes trying to prevent himself from floating away from the boat and reaching for Mrs Vhd Vhd’s breasts, “which were round and firm, and the contact was good and secure and had an attraction as strong as the Moon’s or even stronger,” with a tone that seems to be more about closeness and attachment than about sex.

By taking everything in a stride of playful curiosity, Calvino allows nonfiction and fantasy to live peacefully in the same world, governed by the same spirit of discovery and a willingness to dwell in the unknown. This willingness is also key to the construction of a love story. Each person (or being) cannot be fully known to the other. Characters don’t merge together but are instead suspended in eternal states of movement in relation to each other, simultaneously repetitive and ever-changing just like the orbit of the Moon around the Earth.

In his lecture on the subject of lightness, part of his Six Memos for the Next Millenium, Calvino explores the idea of “literature as an existential function, the search for lightness as a reaction to the weight of living” (translation by Geoffrey Brock, 2016). He writes:

One might say that what strikes the literary imagination about Newton’s theories [on universal gravitation] is not the subjection of all things and people to their own inescapable weight but rather the balance of forces that allows celestial bodies to float in space.

Sometimes the idea of gravity conjures heaviness, but lightness, too, depends on forces of attraction and so do love stories. Calvino’s work reminds us that curiosity itself is a kind of gravity, a pull that is difficult to understand or measure and yet is instinctively, unavoidably felt. Leaving the facts to the scientists, Calvino is more interested in images, stories, and the feelings they provoke.

Tags:Cosmicomics, Italo Calvino, Six Memos for the Next Millenium, The Distance of the Moon