Home
»
Reading
»
The Possibilities of Brooklyn Past 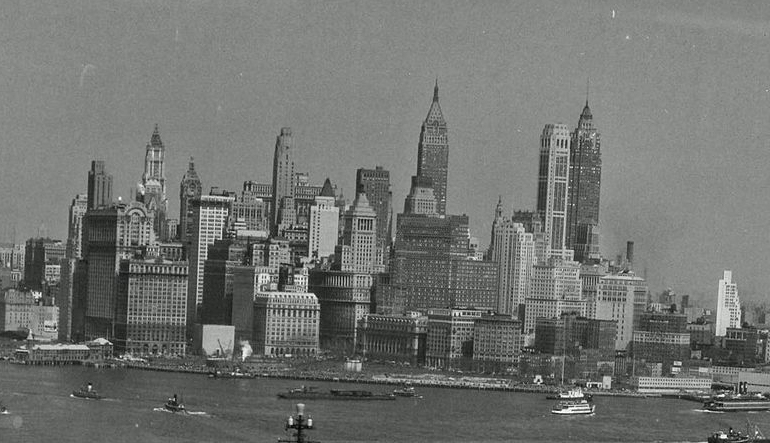 Rarely do an adaptation and its source material mesh so well as they do in Brooklyn—the 2009 novel by former Ploughshares guest editor Colm Tóibín, and the 2015 film by John Crowley. The book offers a nuanced and multifaceted portrait of our heroine Eilis Lacey, while the film shows us lush Irish vistas, and the storefronts, streetlamps, and brownstones of 1950s Brooklyn to which our imaginations could never do justice. Although the two interpretations hew closely together in both plot and theme, each narrative ends with its own particular strain of ambiguity.

Brooklyn introduces Eilis in her (and Tóibín’s) hometown of Enniscorthy, Ireland, and follows her immigration to, you guessed it, Brooklyn. Crowley and his screenwriter Nick Hornby take great care to stay faithful to Tóibín’s book. Nearly every scene from the novel makes it into the movie, and even the ones that are elided crop up in a stray piece of dialogue or telling close-up. Saoirse Ronan conveys Eilis’s isolation and homesickness so well without delivering a line, we almost don’t miss the pages and pages describing the emotional complexities of her plight.

The film does well including virtually all the minor characters, even if they play no part in the plot. When an old Brooklyn man sings a haunting tune in Connemara Irish at a Christmas Day feast for the indigent, readers will recall that in the book he reminds Eilis of her dead father, and he glances at her “proudly, almost possessively” as he performs. This moment on screen, one of the first where Eilis finds real community in her new homeland, achieves its power even without Eilis’s thoughts of dear old dad, thanks to Ronan’s performance and Crowley’s filmmaking. Viewers familiar with the novel are simply rewarded with a bonus layer of meaning.

As poignant as the film is, it’s less than daring when it comes to Eilis’s character. In the novel, Eilis snaps at her matronly fellow boarders of the house on Clinton Street if they get out of line. When one of the women, Sheila, complains about the quality of men at their dances, Eilis suggests the situation might improve “if we got rid of some of the wallflowers, with the sour look on their faces.” This shade, of course, is directed at Sheila herself. The movie version of Eilis is never rude to anyone.

A more significant departure from the novel occurs toward the end of Eilis’s story (caution: major spoilers follow). After the newlywed Eilis (she’s secretly married an Italian plumber named Tony) is forced to rush home to Ireland to tend to family affairs, she quickly finds herself in a surprising flirtation with an Enniscorthy man named Jim. In the film, their relationship is portrayed as a mere dalliance, and there’s nothing to suggest that Eilis and her local admirer have accelerated things or become any kind of an item. In the book, there can be no doubt of Eilis’s infidelity. It’s often the province of fiction to explore the psyches of fundamentally good people who act immorally, and I would’ve liked to see the screen adaptation enter that muck as well.

The film makes no real argument for Eilis to remain in Ireland. Sure, there’s an undercurrent of familiarity as she returns to her childhood bedroom and reunites with her old friends, and it’s made clear that she could have a life, a job, and a husband in her hometown if she so chose. In the novel, however, Eilis describes her potential Enniscorthy job as, “the work she had been dreaming about as she had stood on the shop floor in Bartocci’s,” the Brooklyn department store where she has been employed. Eilis has spent two years attending night classes at Brooklyn College to get her bookkeeping certificate, and the opportunity to use it would come sooner in Ireland than in the United States. And in Tóibín’s novel, Eilis’s romantic prospects in Enniscorthy are exciting and real, perhaps more so than her courthouse marriage. We see this in blunt terms when Eilis attends her friend’s wedding: “It occurred to her, as she walked down the aisle with Jim and her mother and joined the well-wishers outside the church, where the weather had brightened, that she was sure that she did not love Tony now.”

In the novel and the movie, Eilis returns to Brooklyn because news of her marriage has begun to reach the outer rings of Enniscorthy’s circle of gossip. Still, in the film, Eilis’s return to Brooklyn is framed as a triumphant choice of the community that has taken her in, over the community defined by its insularity and outdated social norms. Eilis proudly tells her hometown busybody that she has married an Italian-American, and goes back to Tony seeming comfortable and even overjoyed to find herself in his arms.

The novel affords its readers no such luxury. We don’t see Eilis’s return to Brooklyn at all, and she makes the trip back only because there’s no practical way to remain in Ireland given her personal history. She is returning to a more difficult career path, and to a man she isn’t at all sure she loves. When Eilis’s mother asks her point blank if she would be going back to Brooklyn if she hadn’t married Tony, Eilis says she doesn’t know.

Tóibín’s book denies us the happy ending that the film gladly offers, despite the two plots landing in almost exactly the same place. In the film, we wonder if Eilis might well have chosen to return to Brooklyn even without her commitment to Tony. In the novel, we wonder if Eilis regrets the choices that set her life down one unalterable path. Personally, I prefer the novel’s unresolved regret. We only get one life, and when we glimpse the avenues now closed to us, it’s almost impossible not to feel a twinge of something. No matter how good our one life is.