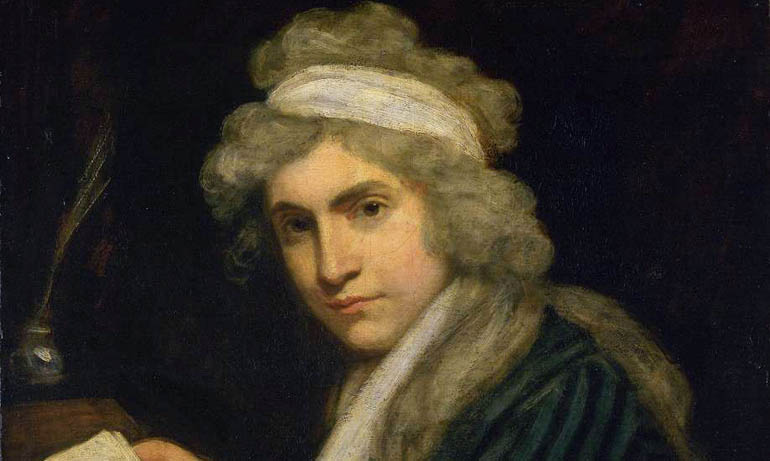 Mary Wollstonecraft’s legacy lies in her famous treatise called A Vindication of the Rights of Woman (1792). Journalist Bee Rowlatt writes for the BBC that with this slim work, Wollstonecraft “pretty much invented feminism.” Born in England, she personally documented the climate in France during its revolution. Her travel writing on Scandinavia is revered on both a cultural and a personal level.

Wollstonecraft went to Norway, Sweden, and Denmark to recover a lost load of silver that her American lover Gilbert Imlay had snuck out of revolutionary France. Her mission was to save a relationship on the rocks. She’d already attempted suicide once and would do so again later.

She had been in love with Imlay a while. Theirs was a romance of highs and lows, of amorous meetings by a barrier in a disrupted Paris, and months-long separations across Europe. The collected letters Wollstonecraft wrote him from 1791 to 1795 are not as widely read as her political and travel writings. Still, they offer precious glimpses of a lively, intellectual eighteenth-century woman in the midst of heartbreak, pregnancy, motherhood, and a blooming writing career.

Wollstonecraft’s greatest asset and perhaps highest hurdle is her imagination, which she praises in one letter as “the mother of sentiment, the great distinction of our nature, the only purifier of the passions . . . the true fire, stolen from heaven, to animate this cold creature of clay.” These eloquent lines echo William Blake and the literary romanticism with which Wollstonecraft’s novelist daughter Mary Shelley would later be so famously linked.

The dark side of Wollstonecraft’s imagination is a painful desperation and fear that Imlay is untrue to her. These emotions color almost every letter she writes him. Note the exclamation points in this passage written a year after giving birth to Imlay’s child Fanny:

Do write by every occasion! I am anxious to hear how your affairs go on; and, still more, to be convinced that you are not separating yourself from us. For my little darling is calling papa, and adding her parrot word—Come, Come! And will you not come, and let us exert ourselves? I shall recover all my energy, when I am convinced that my exertions will draw us more closely together. One more adieu!

Throughout these letters, Wollstonecraft writes of fainting spells, fevers, insomnia, intense headaches, depression, and a belief she suffers from a “galloping consumption.” She appears both physically and mentally unstable. Compared to these physical observations, it’s surprising how rarely she mentions pregnancy, as if children must win both their mothers’ hearts and attention upon being born. One instance is seen when, before giving birth, she anxiously wonders if “the creature goes regularly to sleep.”

Eventually, Wollstonecraft is smitten, writing of Fanny: “She has got into my heart and imagination, and when I walk out without her, her little figure is ever dancing before me.” After others’ warnings on “suckling [her] child too long,” she writes of a mother’s unique sadness upon weaning a baby.

Even in her heartsick state, early motherhood doesn’t cloud Wollstonecraft’s egalitarian worldview. She mourns the fact that her “little darling . . . is a girl” and born to a world that, for women, “is ever sown with thorns.”

Ever the revolutionary, Wollstonecraft does things differently, reminding Imlay that she doesn’t intend to “wife” him (though fascinatingly, an early letter is signed “Mary Imlay”). Theirs is a child born out of wedlock, something that, all things considered, seems not to bother Wollstonecraft. She never mentions marriage directly, and though she implores Imlay for letters, visits, and reassurances of his love, she never alludes to a wedding. Instead she assures him that “the little girl and I will live without your assistance.” “Love,” not money, is the “want of [her] heart.”

Throughout her later letters, she circles back to the notion of suicide and a longing to “plunge into the Thames” (which she eventually did) and to “[lay] her head on a stone,” finding rest at last. Time and again, it’s Fanny who keeps her from following through on these desires.

Imlay later relinquished all his ties to Wollstonecraft, pursuing another woman, though offering to provide financial support for mother and daughter both. Wollstonecraft didn’t accept it. In her final letter to Imlay, eyes open to his betrayal, she admits to being wrong about him all along, sending him “an eternal farewell,” ever the romantic.

Unlike nearly all the letters coming before it, this one is devoid of exclamations. She seems at peace now, ready to abandon Imlay, the world, and even little Fanny. Thankfully, for women and readers alike, this wouldn’t be her final goodbye.