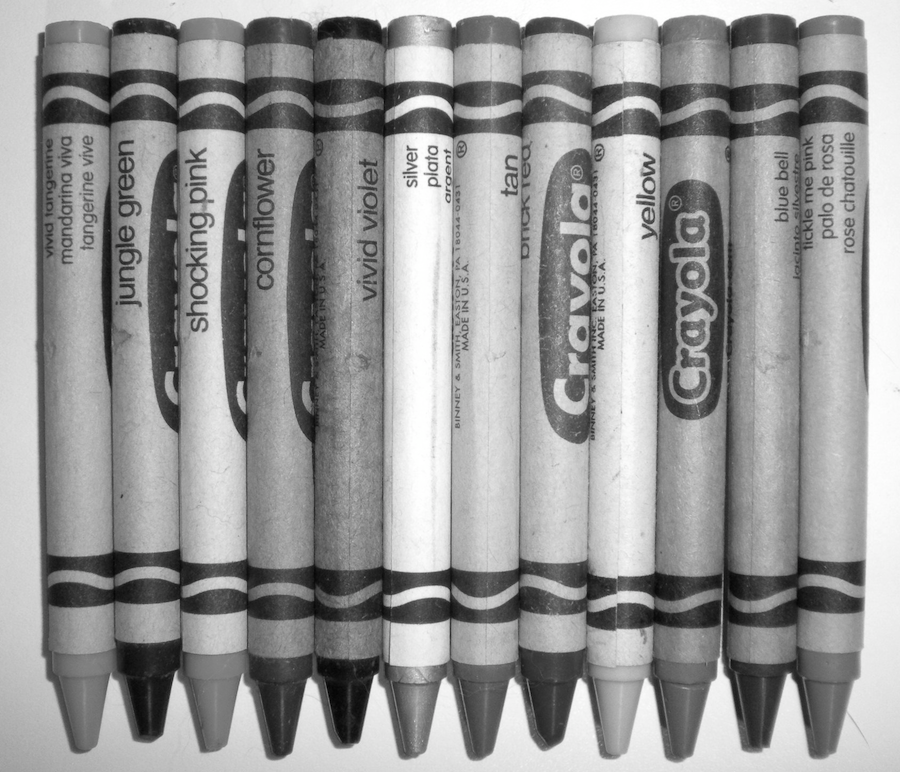 For my daughter, who just turned two, language is plastic. She pokes it and stretches it to find out what it can do. Joyfully, she tells stories (only some of them true) about her day. She loves to list the parts she and the cat do and don’t have in common.

When it comes to colors, though, she just won’t play—at least not the way I want her to. “What color is the duck?” I ask, pointing at the page.

She looks at me, grins, and says nothing.

Her grin gets wider. “Blue!”

This is her customary answer for ducks, fire engines, leaves, pumpkins, and her hair.

I feel some sympathy. The color of the duck in her book doesn’t look much like the color of the sun or the color of a sunflower or the color of her yellow magic marker, yet we want her to use the same word each time. I know this category—resistance doesn’t play much of a role in my daughter’s motives—those are more closely related to her refusal to take a nap in her crib at home much of the time, whereas at daycare she sleeps for an angelic two-and-a-half hours. (Her teacher there says she knows her colors just fine.) But I’m reminded of my own reaction to the kind of flattening in some of my history and social science courses in college: after these events, the public mood darkened. I always thought whose mood? Even for one person, can we really use just that word, darkened, and feel like we’ve got a whole state of mind in all its shiftiness? There’s a reason I fled to fiction.

Yet writers have always had their own mistrust of language. The modernists made a whole movement out of this mistrust, as they tried in their various ways to give voice to the unspeakable things World War I had made them see and consider. In A Farewell to Arms, Hemingway writes, “Abstract words such as glory, honor, courage, or hallow were obscene beside the concrete names of villages, the numbers of roads, the names of rivers, the numbers of regiments and the dates.” The loftier the word, the more tenuous its connection to lived experienced, and the likelier it was to be the sort of lie for which people were dying.

The modernists didn’t invent this idea, of course. The discrepancy between inner life and our ability to express it fuels the whole tragedy of King Lear; everything begins to go south when Lear demands his daughters put their love for him into words so he can divide up his kingdom accordingly. Cordelia, the only one who actually does love him, is also the only one honest enough to refuse to play his impossible (and kind of asshole-y) game:

LEAR: …what can you say to draw
A third more opulent than your sisters? Speak.

CORDELIA: Nothing, my lord.

LEAR: Nothing will come of nothing. Speak again.

CORDELIA: Unhappy that I am, I cannot heave
My heart into my mouth.

If her heart were smaller, she’s trying to tell him, maybe she could.

A frustration with language’s ability to capture the full sweep of life has probably been around as long as people have been trying to write literature at all. I tell my fiction students that they’ll begin with a glimmering vision of what they want to create, and then they’ll try to capture it in words, and they won’t (or at least I never have). The best most of us can hope for is to catch that vision’s footprint as it leaps away.

What to do, then, since words are, after all, what we have, if we want to say anything? Words may be blunt approximations, but out of them, books can still somehow make limitlessness, a reflection of inner experience that feels full. They manage this, maybe, by being flexible in ways reality isn’t. So a haunted past can become a physical reincarnation, as it does in Toni Morrison’s Beloved. (Morrison writes of Beloved that “[…] the work of language is to get out of the way.”) A character can live and die enough times for us to see every side of her, and of her historical moment, as in Kate Atkinson’s Life After Life. Even as old a narrative standard as omniscience flouts real-life rules. A story isn’t life, after all—fictional life has been carefully arranged to show us something about the characters and ourselves, and it’s in the arrangement that the whole can swell beyond the limits of its parts. It’s magic—or maybe just (just!) empathy.

My daughter will learn this about words, too, I’m sure. When she decides she wants to.