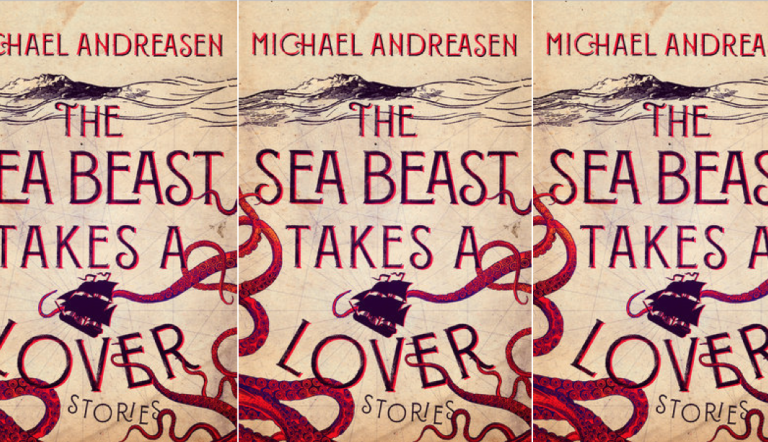 The Sea Beast Takes a Lover is the debut short story collection from Michael Andreasen. Through a mix of absurdism, hyperbole, science fiction, history, and fantasy, the author draws a map of washed-up American dreams and fears. His stories chart the plains of abandonment, the futility of love, and vague hopes that never solidify. From the titular lonely sea monster to the King of Retired Amusements to time-traveling third graders, Andreasen’s characters explore this map of disappointment and hardship, learning again and again what we already know but are too afraid to speak aloud: Everything comes to an end. Everything.

And from each ending? The hint of a new beginning, carrying the reader forward into the next story, and the next. The stories aren’t linked by character, place, or even time, but they are spiritual brothers and sisters, each full of vague terror and unfulfilled dread, the lines of their explorations crisscrossing each other on the invisible map the author has laid out for us.

“Our Fathers at Sea,” the first story in the collection, depicts a strange funeral rite: a seemingly normal family shares a final diner with their ailing, mute grandfather, and in the morning they send him off in a helicopter that will dump him somewhere in the Atlantic Ocean. He will die there, crushed by the awesome pressure of the sea.

The son recalls of his father, “You showed me how controlling the water level prevented [tadpoles] from maturing into frogs, and how nice it was to keep the tadpoles as they were, blindly swimming around until they died and we replaced them with new ones.” We are all tadpoles, frantic in our efforts until we die. The next generation of tadpoles picks up where we left off, and the dream of success remains just that—a dream.

The opening story sets the mood for the rest of the collection. Although Andreasen works with the absurd and bizarre, he trades in real human emotion. His version of absurdism is subdued and patient. It strips away the polite reality we build around ourselves and reveals the absurdities lurking in our own lives—like pumping our dead loved ones full of chemicals to make them look alive again, and encasing them in metal and concrete so they cannot decay.

In “The King’s Teacup at Rest,” the King of Retired Amusements travels around the country, purchasing abandoned carnivals and boardwalks. A steward, a dancing bear, and a scout accompany him. Each carries his own loneliness and fear, and each searches for answers that cannot be found.

“It is not that he prefers the worn and discarded,” the story’s narrator states of the king, “It is that, in the end, he cannot tell the difference.” He cannot recreate the magic of the carnival, no matter how hard he tries. That dream, too, has passed.

A sort of twisted, dark nostalgia runs through The Sea Beast Takes a Lover. Nostalgia tends to gloss over hurt and fear, dulling the pains of the past with time and distance. Instead of allowing his characters to become sappy, Andreasen sharpens the pain and uses the blade to cut open old wounds.

He tackles the supposed innocence of childhood in “Andy, Lord of Ruin,” a story about a violent middle-schooler who develops an odd glow and becomes increasingly explosive until he self-destructs.  “We watched as Andy cornered rabbits and squirrels against property walls, setting legs and heads and little tails aflame with barely a touch.” Andy, transformed into a burning monster, becomes the embodiment of all childhood sins, but especially the sin of thinking childhood ever meant purity.

Despite its darkness, the book is not ultimately hopeless. “Still though, I’m here,” says the brother in “Jenny,” a story about a girl born without a head. Even though she is headless, Jenny can communicate through taps, eat through a tube, and enjoy the vibrations of bass-heavy music. After Jenny is assaulted, her brother blames himself. In a fit of guilt and rage, he barges into Jenny’s room one night, hoping she will tell him how terrible he is, but instead finds her using her subwoofer to masturbate. He hides this from his shaken mother, his guilt and shame still intact. “Still though, I’m here,” he says.

Existence and survival are their own triumphs. The characters of The Sea Beast Takes a Lover may have failed, or gotten lost, or fallen off the map entirely. But by and large, they endure. They—we—do not know what’s coming for them next. Perhaps it’s a lonely sea monster looking for a mate. Perhaps it’s a trap made of our own minds. Perhaps it’s death.

But through all that—yes, even death—we endure. And so, too, will these stories.