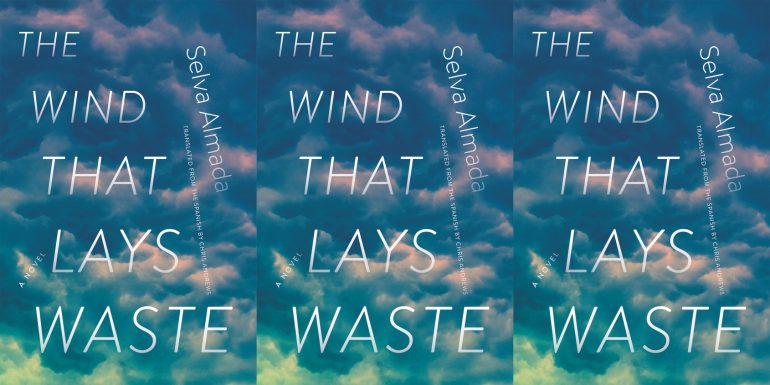 Selva Almada’s The Wind that Lays Waste is at once an intimate encounter of four characters in the midst of a storm and a reflection on the inner worlds of the characters that ultimately isolate them from each other. Perhaps most powerful in the book is Almada’s focus on detail—she skillfully renders the story of a day in brief chapters that reveal the thoughts and fleeting encounters of characters, who are largely living inside themselves, throughout the course of the story. Their insular worlds of hidden memories, hurts, and small joys stand in stark contrast to the landscape around them—described, at the beginning of the book, as a drought-ridden landscape of “stunted, dry, twisted trees and the bristly grass in the fields.” The earth is parched and vast, the sun merciless. Against this backdrop, Almada’s story unfolds on a minute scale, focusing on ordinary moments that range from taking a nap to drinking a glass of water. In incorporating the mundane details of life, Almada renders a realism that is almost tragic. Because her characters engage in relatively guarded conversations with each other, memory and the unsaid are the most compelling and haunting elements of this book.

About three-quarters of the way through the story, the power of a storm changes The Wind that Lays Waste’s landscape. As the characters recall particular memories and acknowledge hidden desires in the lead-up to the storm, Almada builds tension that gathers like clouds at the horizon. The charismatic Reverend Pearson, a traveling preacher, finds himself at odds with Gringo Bauer, a car repairman who believes more deeply in the power and goodness of nature than of God. Gringo is raising Tapioca, a boy who was left with him by a woman who claimed he was the father. Now working as Gringo’s assistant in the shop, Tapioca longs for something bigger than himself, someone like God. Leni, Reverend Pearson’s teenage daughter and the only woman in the story, longs for her mother, the woman Reverend mysteriously left when she was a child; she looks on her father with a blend of skepticism and admiration. These tensions are somewhat calmed during the course of the storm, which arrives shortly after Gringo fixes the Reverend’s car.

Like the barren, dry space in which the Reverend and Leni find themselves when their car breaks down, and like Gringo and Tapioca’s isolation from the neighboring towns, the storm itself is both an expansive and intimate event that pushes and pulls against the conflicting natures that must shelter from the storm in Gringo and Tapioca’s little hut. There is a coming together as the storm begins, a mutual release: “All four raised their faces to the sky. Right then, nothing could have been better.” Almada goes on to say, “In that unique moment of plentitude, the four of them were one.”

Of course, this oneness must unravel because the characters each inhabit their own small worlds with different outlooks on life and different desires to fulfill. The storm—to which Almada gives such careful attention—magnifies such interior lives. At first, it highlights the characters’ hidden thirst: when it begins to rain, they each take swigs from a bottle of beer passed among them. The earth is described similarly: “the thirsty earth absorbed the drops as soon as they hit the ground.” The rain then serves as a veil—“[s]ometimes the curtain of water was so dense they couldn’t see the old gas pump, although it was just a few yards away”—providing a privacy in which Gringo and Reverend Pearson can connect over deeply-felt memories of seeing a dead man as children. But their connection is quickly shattered by the Reverend’s revelation of his desire to take Tapioca with him to Castelli, the next town on his preaching circuit. By this time the storm has passed, and though it continues to rain, the storm’s power, which brought them all into this small room together, has dissipated. What ensues is a wrestling match in the rain. It is ultimately Tapioca’s desire to go to Castelli that defeats Gringo and shatters Leni, who hates the thought of Gringo being left behind by the Reverend as her mother was years ago.

The story ends in a way reminiscent of Flannery O’Connor’s work: readers are left to unearth the mystery of what has happened, what is left in the wake of the storm. The end scene in which the Reverend drives away from Gringo’s garage with Tapioca in the front seat and Leni in the back, shielding her eyes against the leaving, is troubling. Two of the characters are left in places of interior pain, while the others are filled with hope. Readers are asked to grapple with what the Reverend has taken from Gringo and Leni and how Tapioca’s own desire to be his own person and to emerge from isolation fits into this vision. Perhaps a part of the answer lies in Gringo’s own reflection on the storm’s effect on the land: “That was how it always went. Punished by drought, and then by rain. As if the land couldn’t stop acting up and had to be punished all the time.” There’s a sense that the characters have enacted similar punishments on each other, though they do not fully realize it.

The brief glimpses into these character’s lives reveal a desire for love—wherever they can find it. For Leni, it is for a straightforward love with her father without “Jesus in there, between them.” For Tapioca, it is love from a God-like figure who calls him by his true name, José, and brings joy and comfort to his life. The Reverend desires a spiritual son to shape as an instrument for God, and Gringo desires the love of Tapioca who has “become a part of him.” The storm, which brings the four together for a night, is the closest Gringo, Reverend Pearson, Tapioca, and Leni come to a community in the course of this story and the closest they come to accessing each other’s lives.

Though readers may leave this story with more questions than answers, Almada’s aim is not to wrap up loose ends but rather to make clear that the loose ends are what make this story important. There is a bit of incompleteness in every human soul, Almada seems to suggest. At the conclusion of The Wind that Lays Waste, some characters feel they are taking steps toward wholeness, some toward pain and a numbing desolation. The earth that has been saturated by water will soon become a desert again.