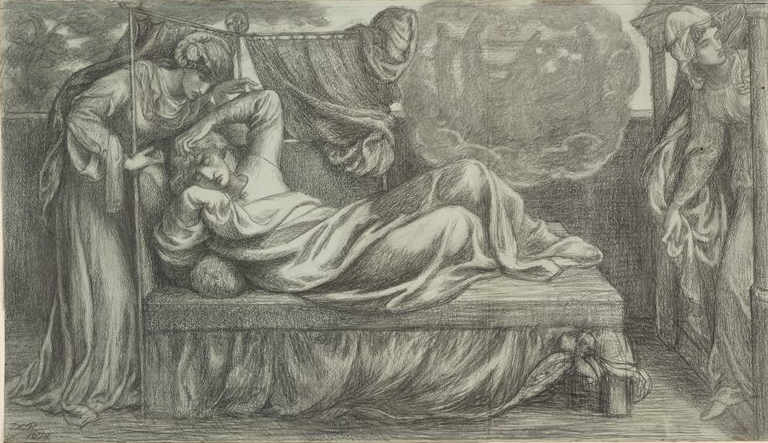 There’s nothing quite like a new baby for creating an obsession with all things sleep-related. My second daughter was born on December 6, and in our dark bedroom at night, my brain is full of the same whirring calculations I remember from my older daughter’s first few weeks: how long before she’ll want to eat again, how much sleep I could get in the meantime if I fell asleep right now, etc. Broken sleep is strange sleep. It makes for strange dreams—for me, they’re shallower, more obviously and directly connected to my waking life than usual. On our first night home from the hospital, I dreamed that it turned out I still had one more baby inside me, and I’d have to go through labor and delivery all over again.

That, I thought when I woke up, would be a horrible dream to put in a piece of fiction.

Most dreams are. Ensconced in conventional writerly wisdom is the rule of thumb that to tell a dream is to lose a reader, and usually I think this holds true. In life, hearing about other people’s dreams is often pretty boring, because their strangeness isn’t meaningful to anyone but the dreamer. In fiction, too, dreams’ strangeness often falls flat, fails to strike us as important. There are so few rules governing dreams that it’s hard for even their wildest leaps and twists to impress us; of course it’s weird, it’s a dream. There’s also the temptation to use fictional dreams to enlighten the reader too directly, too heavy-handedly, about characters’ subconscious desires and fears. The bored suburban husband has a dream of exhilarating mountain climbing, the stifled wife has a sexy dream about her neighbor, and so on.

But it’s also true that some dreams in fiction do astonish, do add depth and life to their larger stories. Sometimes it’s their sheer dazzling inventiveness that compels. I’m thinking of Mercutio’s Queen Mab speech in Romeo and Juliet—not even a dream, but a description of the fairy who brings dreams:

She is the fairies’ midwife, and she comes
In shape no bigger than an agate stone
On the forefinger of an alderman,
Drawn with a team of little atomi
Over men’s noses as they lie asleep.
Her wagon spokes made of long spinners’ legs,
The cover of the wings of grasshoppers,
Her traces of the smallest spider web,
Her collars of the moonshine’s wat’ry beams

You would think a description of a dream-fairy would be less gripping, even, than a description of a dream, because it’s one step more removed from the reality of the play. But I taught Romeo and Juliet to 9th-graders for years, and I’m never able to re-read that speech without Queen Mab’s tiny coach, complete with those spider-leg wheel-spokes, galloping through my brain. She takes a vivid life from the language itself—and so does Mercutio, incredible creature, great over-abundance of characterization. Mercutio doesn’t need to be as big as he is for his play to work, but there he is, towering. And his speech, while it has no direct bearing on anything that will happen in the play, does set up the glowing, shifty seam that divides dreams and reality in this world: Romeo has at this point already had a dream of doom, and understands immediately upon his meeting with Juliet that the dream was a premonition.

I find Lockwood’s dream, early in Wuthering Heights, to be another counter-example to the no-dreams rule—and perhaps for similar reasons. Lockwood, our narrator, has chanced upon the mysterious world of Heathcliff’s manor, and has been brought, without Heathcliff’s knowledge, to sleep in the dead Catherine’s former bedroom. After reading over Catherine’s old journals and beginning to devise some of the story of her life, he falls asleep and has a dream in which he’s lying in this same bedroom, listening to what he thinks is a tree branch scraping the window-pane. He decides to open the window and stop the sound. Then things take a turn:

The hook was soldered into the staple: a circumstance observed by me when awake, but forgotten. ‘I must stop it, nevertheless!’ I muttered, knocking my knuckles through the glass, and stretching an arm out to seize the importunate branch; instead of which, my fingers closed on the fingers of a little, ice-cold hand! The intense horror of nightmare came over me: I tried to draw back my arm, but the hand clung to it, and a most melancholy voice sobbed, ‘Let me in—let me in!’…As it spoke, I discerned, obscurely, a child’s face looking through the window.

Here we have a dream which at first seems not to be a dream at all, taking place in the bedroom Lockwood actually occupies. This is part of what makes the dream powerful, I think—the way it sneaks up on us out of recognizable reality. Things begin to escalate and shift with Lockwood’s punching-out of the windowpane, an out-of-proportion response to a branch scratching glass. And then comes that vividly horrifying hand, instead of the expected branch, and that summoned voice. There is no “drawing back” of Lockwood’s arm, or himself, from this nightmare—he is fully immersed. The dream signals to us that we have entered a world that is not quite ordinary, a world whose forces are larger than the forces that govern our own. And that those forces are ready to reach out and grab us, too.

As immersive, in a different way, is Cromwell’s fever dream near the end of Hilary Mantel’s Wolf Hall, another dream without which the larger work would be weaker. We have already spent over five-hundred pages with Thomas Cromwell by this point in the novel. We have seen the horrors of his childhood with his abusive father, seen him survive the devastating loss of his wife and daughters, and watched him navigate the treacheries of Henry VIII’s court. Though we’ve seen him experience suffering, Cromwell has come to seem almost invulnerable, the sort of survivor who will always rise above, thanks to the quick crisp workings of his brain. To see that brain invaded by fever dreams, then, is shocking:

On the stairs he can hear the efficient, deathly clip of his father’s steel-tipped boots . . . He closes his eyes. Ladies move behind his lids: transparent like little lizards, lashing their tails. The serpent queens of England, black-fanged and haughty, dragging their blood-soaked linen and their crackling skirts. They kill and eat their own children; this is well known. They suck their marrow before they are even born.

This fever dream serves as a kind of vision of England with all the politeness and pretenses stripped away. Cromwell’s father’s cruelties slip into the cruelties of Henry’s court; it’s the slipperiness of this world that, no matter how gifted Cromwell is, will catch up to him in the end. The dream suggests that on some level, even Cromwell himself knows that.

Dreams are a risky proposition for a fiction writer. They can be heavy-handed, ineffective, alienating to the reader. But when done well (and it so very hard, of course, to do them well), when they seem to grow naturally and yet surprisingly from the world of the story, they can also connect us to the forces at work beneath that world’s surface. A connection to those forces has a power that’s difficult to overstate. This is why we can’t resist telling other people about our real-life dreams, I think—we’re trying to communicate what that brush with our own subconscious felt like, what it meant to us. It’s just hard to put into words, is the trouble—as most of the best things are.