Home
»
Critical Essays
»
To Remember is Also to Lose: Marguerite Duras’ The Lover 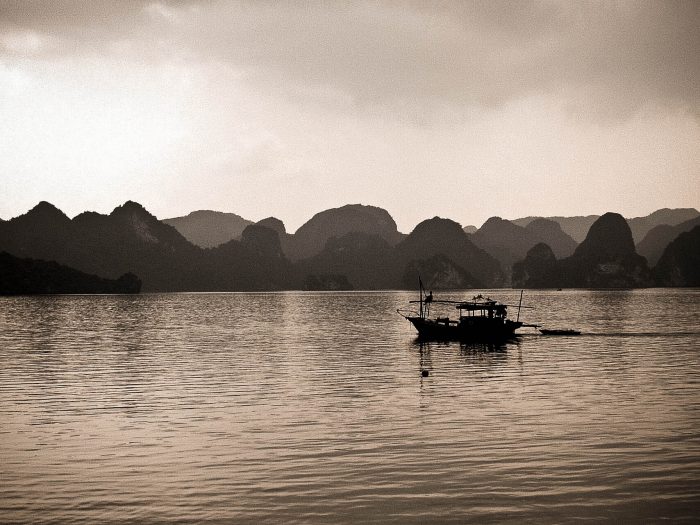 On the very first page of her most famous and autobiographical novel, The Lover, Marguerite Duras seems to capture in one line the most powerful aspect of the book: “Very early in my life, it was too late.” In this line, recollection, loss, the time that causes it, and the past and present, all exist simultaneously. Even the future is already present and decided. The memory is held up in the very moment of its reclamation and loss, all at once.

Reading Duras’ memories of the boat to Saigon, her fifteen-and-a-half year-old self standing on the deck, about to meet the man who would utterly alter the fabric of her life and experience, memory is not something to be merely recounted as this happened, then this, and then this. It is in flux, as it is in life in all of us, as we remember. It does not run smoothly but emerges, moment by moment, crystalline and glittering. The book is written in fragments, searing images of her childhood, her affair at fifteen with a Chinese businessman, and the devastating violence of her family life. The most potent image, and the one Duras admits she treasures most, is the moment she stands, fifteen-and-a-half, in gold lamé shoes and a man’s fedora on the ferry to Saigon.

The way Duras writes the image of the girl on the deck, of the crystalline moment that went unrecorded in any photograph but is nonetheless the image the entirety of The Lover hinges on, and it itself is a lesson in memory and loss on the level of every sentence:

It might have existed, a photograph might have been taken, just like any other, somewhere else, in other circumstances. But it wasn’t. The subject was too slight. Who would have thought of such a thing? The photograph could only have been taken if someone could have known in advance how important it was to be in my life, that event, that crossing the river. But while it was happening, no one even knew of its existence.

The structure of The Lover is not linear. Instead, it is like picking up two ends of cloth, one on each side, raising them together in the same moment, drawing them to each other, to fold and fold. What starts as expanse ends small. Images echo at beginning and end: the boat on the Mekong where she meets the Chinese businessman who becomes her lover and the ship with the sudden flurry of Chopin.

The text is made up of fragments, of moments recorded with all the detail their emotionally vital content demands. The sentences through their repetitions and pauses, and their little refinements, retain the knowledge that this is memory; memory fades as we touch it, and is lost and altered as we lay claim to it:

Things that were or should be certain are folded into disappearance, forgetfulness, doubt. Even the gold lamé shoes the girl wears on the boat exist in this haze, not quite brought up with one side always hidden and folded into itself:

I can’t remember the shoes I used to wear in those days, only certain dresses . . . This day I must be wearing the famous pair of gold lamé high heels. I can’t see any others I could have been wearing, so I’m wearing them.

This extends even to the tortured and fervent love she has for her mother, for her family’s ruinous dynamic, each alone in their pain, each unwilling or unable to meet the other where they stand in their personal struggle. This is written frankly, full of that haze of memory; the truth always something touched barely, on the edge:

In the books I’ve written about my childhood I can’t remember, suddenly, what I left out, what I said. I think I wrote about our love for our mother, but I don’t know if I wrote about how we hated her too, or about our love for one another, and our terrible hatred too, in that common family history of ruin and death which was ours whatever happened, in love or in hate, and which I still can’t understand however hard I try, which is still beyond my reach, hidden in the very depth of my flesh, blind as a new-born child.

The torture of memory is erosion. With every recollection, memory is shifted slightly, edited; some part cast into shadow, another distorted by the light of our glance. To remember is to regain and to lose, all at once. Duras brings this to us in her treatment of time: as malleable, as object; to be held up and looked at as facets and contradictions all at once. She speaks in hesitations and changes with a work full of commas. There are repetitions and clarifications; one sentence changes, refuting or refining the preceding one. To read her recollections is like sitting with someone old, perhaps, as they take out objects from a trunk, turning them over, confessing without guile or pity.

What makes The Lover as explosively impactful as it is, for me at least, is that it holds everywhere this torture of recollection, and most particularly, recollection that was, for a long time, purposely hidden. Duras says herself:

I’ve written a good deal about the members of my family, but then they were still alive, my mother and my brothers. And I skirted around them, skirted around all these things without really tackling them.

There is, therefore, an aspect of the forbidden; of painful things seeing a light they perhaps should not, things that are devastating to remember, and are somehow because of this, all the more vivid as they rise to recollection.

But to write the story is to undo the real one. To try to touch what one remembers is to have some of it come off on your fingers, leaving the object itself forever altered. The most haunting aspect of such memory, of it existing as a written text, as it does in The Lover, is perhaps nowhere so perfectly summed up as in what Duras says herself:

The story of my life doesn’t exist. Does not exist. There’s never any centre to it. No path, no line. There are great spaces where you pretend there used to be someone, but it’s not true, there was no one. The story of one small part of my youth I’ve already written, more or less — I mean, enough to give a glimpse of it. Of this part, I mean, the part about the crossing of the river. What I’m doing now is both different and the same.