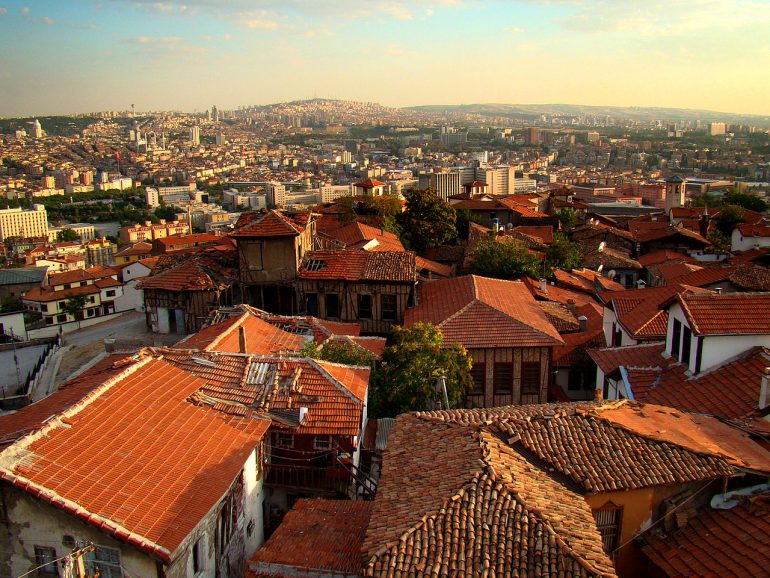 Amy Spangler is the co-founder of the Turkish literary agency AnatoliaLit and a translator of several novels from Turkish to English. Amy’s latest translation, Noontime in Yenişehir, was published by Milet Publishing last year. We chatted about the challenges of translating that novel, her push to bring Turkish modern classics to English readers, and the difficulties she encountered selling writer Aslı Erdoğan’s work in English before she became known for her imprisonment following the July 15th coup attempt in Turkey.

Maria Eliades: The most recent book that you’ve translated and put out is Noontime in Yenişehir, which I really enjoyed. Sevgi Soysal’s caustic at times, she’s really observant, it’s really funny, but at the same time you really end up feeling for the characters. Ali for instance, I never expected to grow on me, but on the end I wanted to know what happened to him. I don’t find that happens to me often when I’m reading a lot of Turkish literature because the authors are different, I read a lot of Turkish authors in translation because I’m a very slow Turkish prose reader, so that’s my limit of reading a lot of times in English. So I was wondering about your own translation choices. Compared to a lot of books that I’ve read that have been translated into English from Turkish, this stands out as something different, it doesn’t feel like what generally gets translated, so I was wondering if you could talk about that.

Amy Spangler: I think the three main characters of that book have stayed with generations of Turkish readers, as you know a modern classic, originally published in 1973, but with that, it’s a very small publishing company that published it, and one of the owners is Turkish. It’s a book that’s near and dear to his heart. Sevgi Soysal is an author who’s very near and dear to my heart, and I already started translating her book Tante Rosa (Aunt Rosa), a very small novella that’s been translated and sold in seven or eight languages, but not in English yet. I actually wanted to do it, and he said, “I want you to do Noontime in Yenişehir,” and I said, “Well I can’t let anyone else translate Sevgi Soysal.”

So I decided to do it, and it took me about four years before I finished it because of various practical reasons.

ME: There’s so much slang in it. I was reading it and imagining what some of the Turkish was, and I can just imagine the difficulty dealing with that, because it is so slangy, and then the particular cultural references at the time, to make it understood in English.

AS: Exactly. There were a lot of challenges on different levels. Just the time, 1971. In 1971, you’ve got the leftist/right-wing clashes, and it’s a totally different framework than you have today. Now, sadly, in some ways American society is becoming very politically infused, but that’s always been the case for Turkey. Also, a lot of these authors from these modern classics are very politically saturated, and so it’s kind of difficult to convey that. In this case, you’ve also got all the different voices. You’ve got Ali’s lower class voice, then you’ve got this middle-upper class voice, then this “gentrified” voice of Doğan and the parents, and the slang of these guys selling stuff on the street.

I was constantly worrying and asking people—what if I say this, what if I say that, and also every translator comes with a certain language themselves. I was raised in southern Ohio, and so often I get criticism in the translation for being too vernacular, like a midwestern vernacular, and I don’t know if that held true in this translation. Sometimes I would just push back, and say, “Let it be,” because a lot of times what happens in these translations is that I do mid-Atlantic. So it’s not British, it’s not too American, but it also becomes a little too palatable, devoid of any type of flavor. You’re never going to get an exact equivalent, so I’d rather come up with something more colorful, maybe regional, than having something bland and mid-Atlantic.

So there were a lot of challenges in that respect. It’s also a very Ankara novel, which I think is impossible to convey, but if the voices came across at all, because there were quite a few voices in there, if I was able to differentiate between them, then I’m very happy about that.

ME: I really do think this is different from many other books that we typically see translated out of Turkish. I don’t know if you agree or disagree with that.

AS: For sure. The list of authors that we represent, you’ll find that we’ve built up a very strong list of modern classics, because this is the best stuff that’s come out of Turkey in the past decades that hasn’t been translated yet. I do also want to read contemporary fiction, and there’s lots of compelling books coming out in contemporary Turkish as well. There’s just so much that hasn’t been translated. Recently, we sold Yusuf Atılgan’s Motherland Hotel, which was published by City Lights in December, which is another fantastic classic. We just got an offer for Leyla Erbil’s A Strange Woman. Finally.

These are all books which have been translated usually into German or French. They’ve already got these modern classics, and when I say modern classics, I mean they were published in the ’70s or ’80s, but the English never became available. I think to understand a lot of the contemporary stuff, you need a frame of reference. So you should know a little Yusuf Atılgan. You should hopefully know a little Oğuz Atay. You should know some Ahmet Hamdi Tanpınar and Sait Faik Abasıyanık. That’s not to say that anyone who reads anything of a particular literature should be a scholar, but still, you kind of need the base before you can build on it.

These are the books that excite me, more than anything. I think especially with Sevgi Soysal, I do have a soft spot for her. But publishers have been reticent, especially the English-language publishers are traditionally reticent about translations in general, though I think that’s starting to change. I think in terms of modern classics, the success of Stoner has really opened up people in the US to looking for more modern classics. So now you have all these publishers starting up these modern classics imprints, which is great for us.

In terms of the contemporary, a lot of the contemporary stuff that people are attracted to [is] more issue-driven fiction? I’m sure I’m not the first person to say this, but in terms of the English language in particular, people are really drawn to something that’s a bit more of an anthropological treatise. So they want to see something that’s talking about the Kurdish issues, or minorities, or being an oppressed woman in Turkey, and they come to it with all this Orientalist baggage anyways, which is not to say that there aren’t a lot of problems. That focus overtakes the complexity and the intricacies of the social dynamics at play in a country like Turkey. At the same time, you have to sell books, so I understand publishers focusing on this. I might have a great, fabulous, existentialist masterpiece, but you don’t know where it’s taking place or when, and people are like, “Why would I want to translate something from Turkish if it’s not about Turkey?”

This is the kind of response. When you mentioned Aslı Erdoğan’s The City in Crimson Cloak in your email, the thing about that was that I couldn’t sell it to anyone. I was going around with it, and that point she’d been published in France and Norway, and had deals in a few other countries. Eventually, I went to this editor at Soft Skull and said, “I’ve got this great novel, but it’s about this Turkish woman who’s in Rio de Janeiro,” and everyone says, “Why would I publish a novel about a Turkish woman in Rio de Janeiro? If I’m going to publish a Turkish author, it has to take place in Turkey, and it has to tell me something about Turkey.” As if putting a Turkish woman in Rio de Janeiro wouldn’t tell you something about Turkey. It’s kind of ironic seeing Aslı getting a lot of attention for a lot of other reasons, but finally getting some of the recognition that she deserves for her literature internationally. The reason she’s getting that is that she wrote in this progressive newspaper that spoke out [for] women’s rights and Kurdish rights, so in a way it ties back to the way that politics sells in literature.

ME: It’s great to see a Turkish writer having attention paid to them and having their work read, but not for these reasons, of course.

AS: These aren’t the reasons we want that to happen. It’s very difficult because there is so little attention paid. If there was already attention being paid to Turkish literature, and there’s attention going around, then we would say, this is a political persecution and we need to stand up against it, but when all the attention is being funneled into the political aspect, that’s what saddens me. I don’t want it misunderstood, because I’ve translated Aslı before. She’s known a little bit in Europe, but before she was in the New York Times, it would have been great if she had taken off then for her literary merit. It’s kind of bitter in a way, that it has to come this so that people get to know these authors.