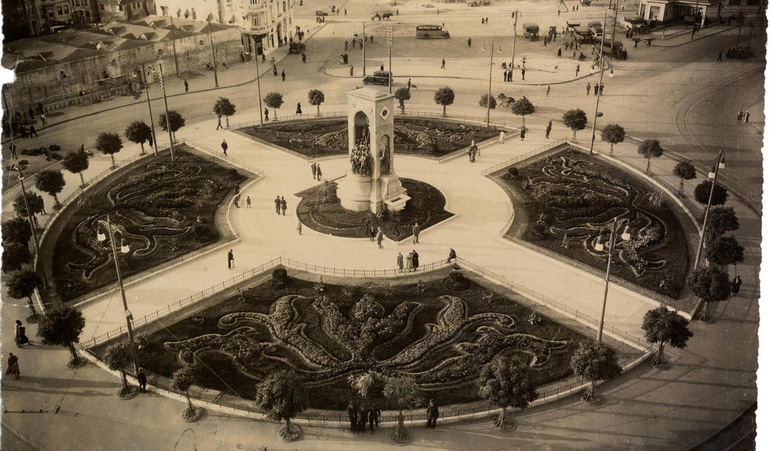 In continuing to write about translating Turkish texts, I spoke with Dr. Erdağ Göknar, an award-winning scholar, poet, and translator best known for his work on Orhan Pamuk’s My Name Is Red, which propelled the author to win the Nobel Prize in 2006, and Ahmet Hamdi Tanpınar’s A Mind at Peace. Göknar, an associate professor at Duke University, recently released his first poetry collection, Nomadologies. We discussed how Göknar’s diaspora background contributes to his work, his approach to translation as a creative act, and the limiting factor of editorial expectations in publishing Turkish texts in translation.

Maria Eliades: What caused you to decide to take a more formal interest in Turkish? From personal experience, I’ve noticed that a lot of members of diasporas don’t take their family’s language professionally seriously. It’s something that we speak at home or that we might enjoy reading in, but usually many people don’t consider becoming a translator or a professor engaged with their family’s language.

Erdağ Göknar: I began through writing. I began writing pretty much since I was in high school. I had a real interest in journaling, writing some poetry fragments, prose fragments, and things like that. My undergraduate degree is in English from the University of Michigan, and I was working in New York doing editorial work. I knew I wanted to do something in publishing. I was very much drawn to that early on, so I applied to an MFA at the University of Oregon. It was that experience in particular that I think influenced me.

I wasn’t always interested in my family background. In fact, I had a very love-hate relationship with it. Growing up in the Midwest, I think before you have any kind of meta-understanding of these things, you don’t want to have a first name with a silent “g” in it. [He cracks up laughing.] You want to be called John or something.

I wasn’t that interested up until I had some time to reflect much later when I was in New York. I was still writing, and I was writing about the stories told by my parents about how they met, or what life was like during World War II in Turkey. I also noticed they were very guarded about the stories they told. They were clearly editing as they were telling, so it seems what got through were funny, quirky stories, but none of the difficulty or the hardship or the tragedy—and there’s a lot of that—or death, sicknesses, and things like that never got through. I did dredge some of that up in time because when I was in Istanbul, I would visit the relatives, and I would ask them about their stories.

I think you’re right, that it’s a common experience that you want to forget the old country and you want to just assimilate. I do feel like I had a little bit of that early on, but it was my interest in writing that allowed me to turn around and pause, and to say, “Wait a second, maybe this thing that I’m trying to leave is actually something that is actually of real interest, and we don’t want to throw the baby out with the bathwater.”

That was how I decided, “Okay, let me not just go back as a tourist visiting family, let me go back in a way that’s like a professional.” That’s when I went for the Fulbright, and that was transformative in many ways. I think that that was a little bit of a surprise to my family as well because it’s not like I was going in that direction before that time. I’d already started in an editorial career and did a 180. It turned out to be very fascinating. I’m still in the heart of this thing. I recently published a book of poems, which goes back to some of these family stories and some of them were written twenty years ago, but I also have an unfinished novel that if I can ever get away from all of the administrative demands of academia that I would really like to finish.

ME: Could you walk me through the process of your first project with the translator, Yurdanur Salman?

EG: I’d never done a long project before. I’d never written a dissertation or thesis or a book, so it was my first exposure to how you might set up the rhythm for doing a longer project. When I think about it now, what’s interesting to me is that we did it paying attention to the lyricism of it. Turkish in particular with its vowel harmony and assonance is very musical, so the fact that we were reading it aloud and turned it into a kind of oral exercise was significant to me. I thought that that brought it to life and made it interesting and fascinating and fun.

When I was doing Orhan Pamuk years later, I was sometimes doing that, but I wasn’t doing it in the same systematic way. I was doing it internally but we’d slowed that process down. We’d go from a verbal idiom to a written idiom, and then revising the text together. Yurdunar would do the first draft, and then I would take over with the refining part, so we had our terrain as well. She’s obviously extremely, very well educated and has a lot of experience in this field, and she had an incredible amount of energy. I kind of want to be inspired and then work, but she was methodical in a way that I’m not. I’m a born procrastinator, so it takes me much longer to get something done, but it was important for me to see how somebody treated it as work, rather than inspiration. It’s something I still struggle with.

So that was a template, and when I came to doing My Name Is Red, I didn’t have a collaborator, and in order for me to do that, I had to really lock myself in a room. I did the first half in Seattle and the second half in Istanbul, and toward the end, where I was doing long hours and when it started to get very comfortable during second or fourth hour, I would translate, take a break, and I don’t think I was sleeping right. If I was up and it was three, I would translate. I finished it that way.

Before I started My Name Is Red, I turned it down, but even then there was pressure. Doing one, I think that was my compromise. I did get a chance to do Tanpınar, but these five hundred page novels take years off your life. [He laughs.]

ME: A Mind at Peace is quite the five hundred page novel.

EG: It was killing me. I also changed my idiom a little bit with that because my thing with Pamuk was, let’s make this accessible. I did want to try to give a sense of what the original was like. With Tanpınar, he’s a lyrical writer, and Orhan Pamuk is not. He’s not what you would call a poetic writer, but Tanpınar is. He’s a poet first, beautiful and impressionistic. With Tanpınar, you’re like, This is going to suffer in English. I knew that going in. So what are you going to do? That novel is difficult for Turkish readers as it’s kind of Ottomanesque. So I stayed closer to the Turkish and worked with that. That’s why I included more Turkish words and did some funny things with syntax intentionally.

In retrospect if you’re trying to reach a wider audience with a novel, that might not necessarily be the way to do it, but I thought that was the way to be true to Tanpınar and his work. I have to say people didn’t like that. If people were calling me an Orientalist for Pamuk, they were doing the opposite for Tanpınar. It was like, “What language is this? It’s too dense.” I did actually listen to that. The paperback came out a year after the hardcover, and I did change it a bit to make it a little bit more accessible and fluid, but it’s still hard.

ME: You write in “Translation as Transformation” in 2013 that “Turkish and Middle Eastern literature is in a ghetto” in the English-speaking world, and that you believe this is changing. It’s hard to argue against the vital importance of Anglophone readers being more broadly exposed to literature from around the world, but I would argue that literature in translation overall suffers from being overlooked in English. Why do you believe that Turkish and Middle Eastern literature in particular is overlooked?

EG: Literature from Turkey and the Middle East is often restricted by editorial and publishing expectations, and maybe that’s a better way to put that. If a work is outside of those expectations, often it doesn’t see the light of day. But just this last year, in 2016, we saw the publication of Madonna in a Fur Coat by Sabahattin Ali; Motherland Hotel by Yusuf Atılgan, which was issued by City Lights; and then even the late Ottoman novel, Felâtun Bey and Râkim Efendi—they all appeared in one year. I wouldn’t say that those conformed to those expectations, which is heartening in a way, but I do think that it’s sort of difficult to manage reader expectations and editorial expectations.