Home
»
Reading
»
Writ in Water: Storytelling on the Rez 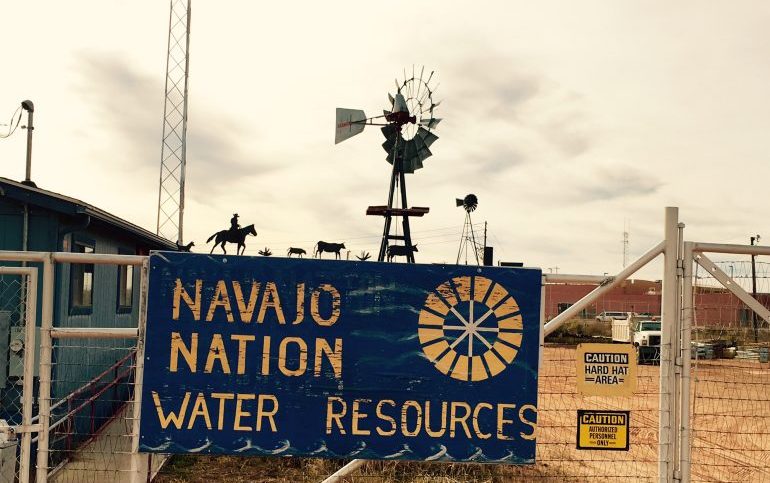 I ask about water.

Water in the West, water in the desert, water that saves and water that kills. Water on a tribal reservation: water for ranches, water for livestock, water hauled hundreds of miles by truck, water for uranium mining, water for ceremonies and legends, water for drinking. Water in the Animas River, flooded with arsenic, lead, and other toxic metals in August by EPA efforts to clean up the Gold King Mine to the north in Colorado.

“Water is life. It’s sacred, it’s powerful,“ Charlissa says. We’re in Tuba City, Arizona, on the Navajo Nation, in a writing classroom at Diné College, the oldest and largest tribally-controlled college in the country. I’m asking the students about the importance of water on the rez. Charlissa says she remembers when a corroded drum in town broke, filling the main street with water. A flood, for a moment, in the middle of the desert, a river on the asphalt.

Amber tells the story of her elderly family members who live along the Animas River and now have to drive two hours to buy water for themselves and their livestock. She wonders if they will be able to stay in their home. Rantrivia grew up on a ranch, and she talks about the difficulties of towing water—the cost of gas and car repair, the time away from work—for her family and their 360-gallon barrel. For some, it is a weekly decision to have water or a working car on a sprawling reservation larger than West Virginia.

“Other people take water for granted,” Candra says. “My senior year of high school, we got our water shut off…It was a struggle. They said there was something wrong with our filtration, so my brother was the one who had to dig out the whole thing and replace it.” When I ask her if the water was contaminated, she isn’t sure. There are many ways water can turn dangerous here. “But my brother was really cautious with it. He used gloves.”

These are old stories newly told. Though there are different tellings of the Navajo creation myths, the power of water is a recurring theme. Up the road from the college is the Explore Navajo Interactive Museum, an exhibit assembled for the Salt Lake City Olympics and then shipped to Tuba and rebuilt. On the placards leading into the museum, the journey of the Diné, the People, is told this way:

First/Black World: The beginning of time. In the first world, there lived various spiritual beings. They were given Navajo names describing certain insects and animals. Altse Hastiin (First Man) and Altse Asdzaa (First Woman) were created. The beings couldn’t get along with one another so they decided to leave through an opening in the East into the Second World.

Second/Blue World: This world was already occupied by the blue birds, animals and other beings who were in disagreement and couldn’t get along with one another. There was severe hardship so they decided to leave this world. First Man made a wand of white shell, turquoise, abalone and jet. The wand carried everyone through an opening in the South into the Third World.

Third/Yellow World: The world was entered first by Bluebird, First Man, First Woman, Coyote, and other beings. This land had great rivers crossing from East to West and North to South. One day, Coyote stole Water Baby from the river, causing a great flood. First Man ordered everyone to climb into the reed to escape rising waters. As the beings climbed out of the reed into the Fourth World, the People discovered Coyote was the one who had stolen Water Baby. Coyote took the Water Baby back to its mother and the flooded waters began to recede.

Water to sustain life, water to destroy worlds. Survival despite hardship and peoples who cannot live together. Tests to pass to stay in the world.

I ask the students if they’ve heard that the Animas spill was intentional, the muddled response a conspiracy. More than a few heads nod yes. There are stories for this, too: the suffering of forced relocation and imprisonment during the Long Walk, the erasure of language and tradition in boarding schools, the slow admission of the poisons of deadly Cold War uranium mining. The president of the Navajo Nation, announcing his intention to sue the EPA for the spill, said he didn’t trust the agency to test the water itself in the cleanup. He has said before that the tribe will not give up its future claims of damages for pennies now. The tribe has learned to be wary of contracts and treaties; the law has too often become a literature of loss.

Zach, who after class will drive almost 900 miles to take his mother to and from an appointment in Tucson, nods when I say the response to the spill would have been different in a big city, but he tries to find the positive. “I’m not saying it’s a good thing, but it kind of gives an idea for people who live in cities, you shouldn’t just take water for granted. There are people out there that cherish the water.”

I said big city, but I meant anywhere people cared about. Anywhere with money, anywhere not on a reservation, anywhere not so easily forgotten like Flint in this fourth and white world. It’s an old story, but not the oldest, and not only one being written today. In fiction class, we workshop Zach’s story, “Survival.” Derek writes about an alien abduction. Kimberly writes a love story set in a fast-food restaurant in a mall. Tara, in English and Navajo, writes about a Diné daughter adopted into a new life, her father determined to raise her to know her people and culture.

From Tuba City and most of the reservation, the Animas River is to the north—the sacred direction of hope and winter, the season for telling creation stories. The museum placard describing the North reads: Here is where we determine to change things and make them better.