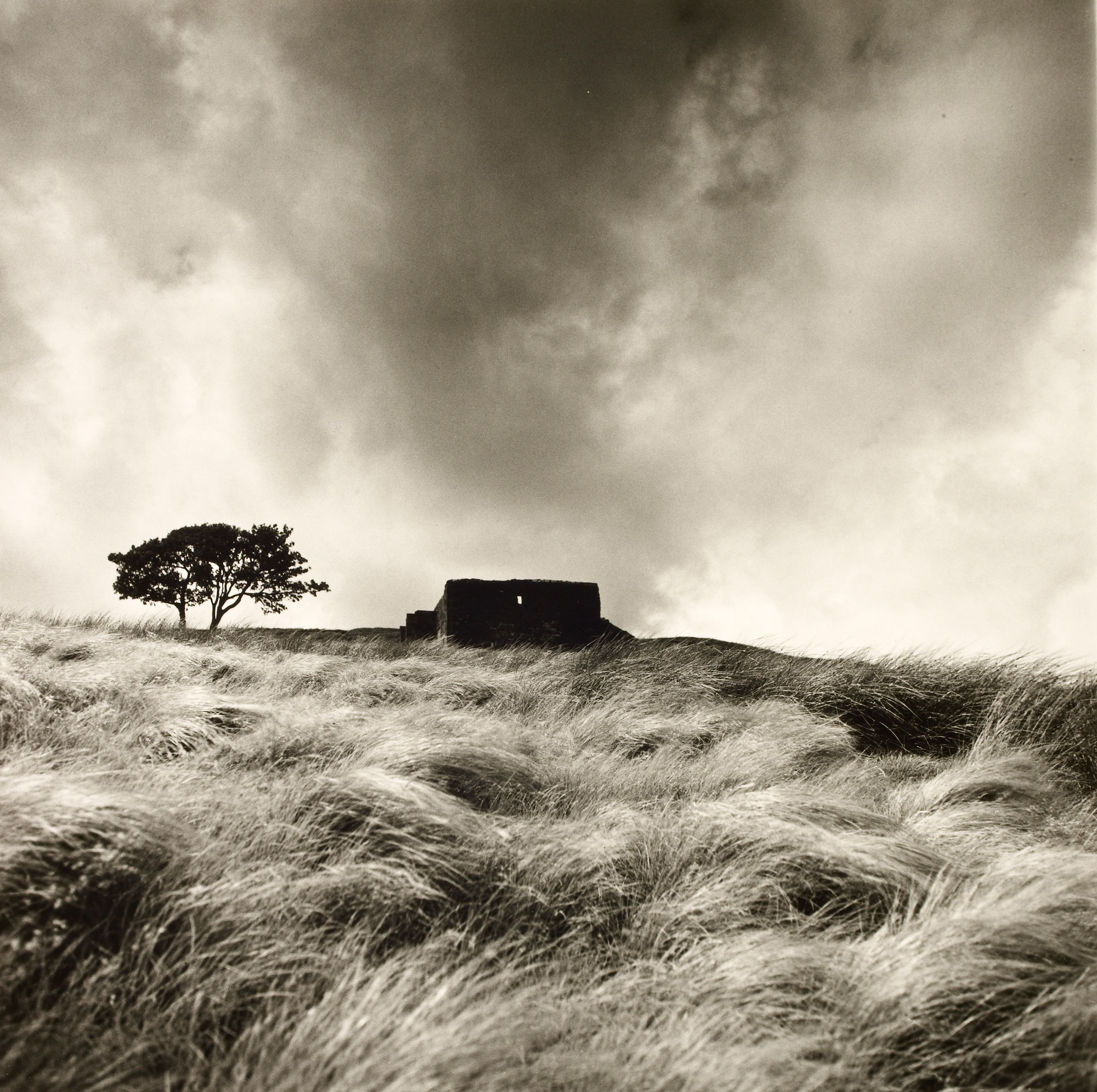 When I was in Haworth, England researching at the Brontë Parsonage Museum this past summer, I crossed paths with a playwright who walked into the library one morning and broke the solemn silence by asking the curator what kind of accent Emily Brontë might’ve had. “Well, we think Patrick spoke with an Irish lilt, so maybe there was some of that, and plenty of Yorkshire too,” was the answer. The playwright seemed satisfied, then carried on with setting out her laptop, notebook, and pencil.

The playwright and I sat reading across from each other for a few hours. The curator would set a box in front of her, and she’d rifle through it—occasionally sighing or quietly exclaiming—until she decided it was time to eat and announced as much very loudly to the whole room. “I can get back in, yes?” In a whisper, the curator described the elaborate procedure for getting back in. Then, before the playwright stood up, she made eye contact with me, said hello, and briskly told me she was writing a play about Emily Brontë in which Emily speaks to her character Cathy Earnshaw. It’s a two-woman show, though really Cathy is meant to be an extension of Emily—a particular side of her personality, she explained. “And that’s why I want to know what her voice sounded like.”

But the thing is, I wanted to tell her, Emily’s voice is lost. It’s gone. In fact, no one ever really knew what it was like, maybe not even her sister Charlotte. Of course, I mean her authorial voice. Critic J. Hillis Miller paraphrases Charlotte’s initial interpretation of Emily’s Wuthering Heights in this way: “The novel is not Emily speaking, but nature speaking through her.” In a sense, this analysis allows Charlotte to get at Emily’s wildness and the novel’s theatricality. But Miller goes on to say that Charlotte seemed unsatisfied with this initial description of Emily’s voice, and tried a few others in an ever-evolving analysis of her sister’s work that shifts the “blame” for it from one source to another—from nature to Yorkshire society, and even to Emily’s supposed religiosity. In any case, Emily “was not responsible for it. She was the passive medium through which something or someone else spoke,” Miller says. That Charlotte felt the need to wrest responsibility away from Emily speaks to the novel’s power and its transgression. It also suggests Charlotte was very much in the business of fashioning her sister’s legacy into something mythic, and she began with her voice.

But I think Charlotte was on to something. What if Wuthering Heights’ multivocal quality began, as Joyce Carol Oates suggests in her 1982 essay “The Magnanimity of Wuthering Heights,” in the plays, performances, and stories the Brontë children composed and created as children? The Brontës’ collaboration, experimentation, pastiche, and parody, are all inherently multivocal, and yet we have a singular, confident, mature voice in Wuthering Heights. Oats writes:

The way by which a masterpiece as unanticipated as Wuthering Heights comes to be written, involving, as it did, the gradual evolution from such early childish games to more complex games of written language…is so compelling a tale, so irresistible a legend, one is tempted to see in it a miniature history of the imagination’s triumph, in the most socially restricted of environments. No poet or novelist would wish to reduce his mature works to the status of mere games, or even to acknowledge an explicit kinship with the prodigies of the child’s dreaming mind: but it is clear that the play of the imagination has much to do with childish origins, and may, in truth, be inseparable from it.

What if Emily Brontë’s achievement in Wuthering Heights is really its dramatic correlation to her own passage from child actor to adult novelist, serving as a natural extension of her language play, and espousing play as necessary work? This isn’t an earth-shattering idea. After all, why do we call plays plays? For decades, psychologists have written reams on the power of play—how it allows children to work cooperatively as well as independently, try on different personas, and work through various problems.

The point of play—or, I should say, the successful end result—is assimilation into adult society. Emily Brontë’s evolution into an adult writer isn’t without conflict, of course, and requires a ghost. But what is a ghost if not sublimated desire for the lost and irretrievable? Despite her mastery, Brontë’s internal conflict yields a cipher of a book, full of signposts pointing to some mysterious origin story begun in what Oats calls Catherine Earnshaw’s and foster brother Heathcliff’s “embittered and savage childhood.” But, as J. Hillis Miller suggests, the cause and reason for the novel’s subsequent action remains beyond language, beyond reason. Even Nelly—servant and storyteller—though witness to Cathy and Heathcliff’s childhood, tells narrator Lockwood that she dared not “speak a syllable for fear of losing the small power [she] still retained over the unfriended creatures.”

The novel is, in effect, about an assumption into the symbolic order that Cathy and Heathcliff fail to achieve. They are, in effect, eternally stuck in childhood, unable to yield their play to adulthood’s social realities. It’s this very tension that gives the novel its air of the supernatural. After all, a ghost child is the most terrifying kind of ghost, representing lost opportunities and, as Shakespeare says, a “time out of joint.” Lockwood, the novel’s narrator and guest at Wuthering Heights, says, “[a]s it spoke, I discerned, obscurely, a child’s face looking through the window. Terror made me cruel; and, finding it useless to attempt shaking the creature off, I pulled its wrist on to the broken pane, and rubbed it to and fro till the blood ran down and soaked the bedclothes.” The ghost is frightening because of its resolve, its willingness to bleed for its return, not unlike the children Cathy and Heathcliff were in life—at least according to Nelly. These were children who upended socially acceptable behavior, most especially their refusal to differentiate themselves from each other. Nelly tells Lockwood, “[Cathy] was much too fond of Heathcliff. The greatest punishment we could invent for her was to keep her separate from him.” And while, as Nelly says, “[Cathy] [in] play…liked, exceedingly, to act the little mistress,” her relationship with Heathcliff—a foundling of unknown origins—upset social hierarchies and was, essentially, indescribable. But maybe that’s the point; even for a writer as dexterous with language as Emily Brontë, some events must happen in silence, and the silence, too, has its own theatrical power.

When Lockwood first enters Cathy’s old room at Wuthering Heights, he’s confronted by the stuff of childhood or, at least, a particular kind of childhood—one lived in relative isolation with limited opportunities for education. We see evidence of Cathy’s early literacy as a ledge with “a few mildewed books piled up in one corner…covered with writing scratched on the paint. This writing, however, was nothing but a name repeated in all kinds of characters, large and small—Catherine Earnshaw, here and there varied to Catherine Heathcliff, and then again to Catherine Linton… but [my eyes] had not rested five minutes when a glare of white letters started from the dark, as vivid as spectres.” It’s almost as if Lockwood has entered the caves at Chauvet and is holding his candle up to the painted wall. It’s shocking to see something both so intimate and so universal—human expression. Whether looking at prehistorical paintings or carvings made by a young girl struggling, through language, to understand the predicament of her existence, we’re exposed to our vulnerabilities, our transitions, evolutions, and hesitant gestures toward knowing. It’s scary and beautiful to see, leaving, as Lockwood says, “the air swarm[ing] with Catherines,” much in the same way archeologist Julian Monney in Werner Herzog’s documentary about Chauvet describes his dreams as full of lions.

The letters Lockwood describes ultimately mean more in respect to Cathy’s daughter Catherine than to her doomed mother because, in effect, they mark and signal a progression that only achieves fulfilment over time and in a different body. The original Cathy Earnshaw and her original moment of childhood fusion with Heathcliff are lost and “unutterable,” as Heathcliff says, while her daughter, Catherine, and nephew, Hareton, are propelled into the future, better equipped to handle the realistic world Emily Brontë gives them—a world free of tenacious ghosts and fairy-tale pacts between two “embittered and savage” children. Yet, there would be no story without them, and no story without the silence that precedes the story, a silence that is eternal, elemental, and real.