Home
»
Critical Essays
»
Anne Garréta and the Grammar of Desire 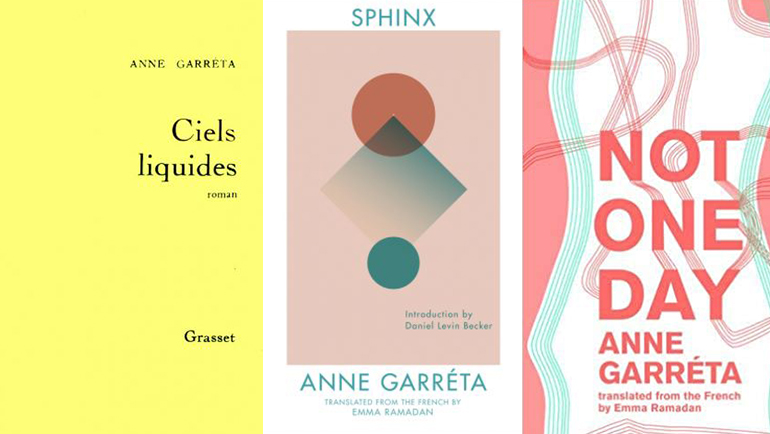 Categorizing Anne Garréta’s work is difficult, partly because it eludes traditional genre distinctions and uses nontraditional rules to structure the language and the narrative, and partly because it is concerned, first and foremost, with “elucidating desire” and the messiness desire brings to experience and language.

Take Sphinx, her first novel, and Not One Day, for which she was awarded the prestigious Medicis Prize—two books that Emma Ramadan recently translated into English from the original French. Both books bring to the forefront questions of how we write, experience, and narrate desire, and of what desire does to the representation of the self. Sphinx tells a sinuous story of seduction between two characters, the first-person narrator and the third-person A***, whose genders are never revealed. This may seem easy enough in English, where the strictures of gender are less overt, but in French, a language saturated with gender markers, creating a solid, coherent, and enthralling narrative devoid of gender amounts to a feat.

It is no coincidence that Garréta is a member of the Oulipo, the first female/queer member of the French experimental literary group, and the first member to have been born after its formation. The Oulipo, defined as “ouvroir de littérature potentielle” or “workshop of potential literature,” is about creating texts using constraining writing techniques, which often have a mathematical premise. Garréta’s own constraints often have a subtle edge to them—you don’t notice them immediately, but their effect on the text is to produce tension; you sense there is an inner logic animating the text, in conjunction with the storytelling.

For example, Sphinx having no gender markers is not just a gimmick to explore what can be done when running counter to what are seen as the natural grammatical premises of the language. By refusing to reveal the gender of either character, the text forces us to reassess two things: First, whether gender really is a necessary component of our understanding of the story; given how often we are forced to disclose our gender, even in social contexts that have nothing to do with it, Sphinx lets us glimpse a world where one may be free to not be defined by gender, or to even evade it altogether, opening up almost infinite possibilities of identification for readers. Second, Sphinx has us reevaluate our very relationship to the language itself.

Even if this is more subtle in Not One Day, the same logic—constraining the writing to open up its potentialities—is at work. Here, the rules are laid out from the very beginning: Garréta supposedly wrote for five hours every day for a month about a woman she has desired or who has desired her. She did this at a computer, without drafting or editing the text, which is composed of the memories that emerged related to this woman. The result is a series of vignettes, ordered alphabetically according to the initial of the woman who is the center of the text. Not One Day asks questions about desire, authenticity, and memory inherent to confessional writing, but with a twist, since Garréta is highly suspicious of contemporary trends in this type of writing that do not confront the long-standing myth of the unitary, singular self.

Garréta’s other works, which have not yet been translated into English, also reflect her underlying preoccupations with how we situate ourselves within the web of language and literature, and how these preoccupations render us subject to ceaseless (de)construction. In Ciels Liquides (Liquid Skies), the narrator progressively loses access to the four languages he knows, including his mother tongue, which spurs a reflection on how much of our relationship to the world is structured by the languages we know and speak. In La Décomposition (Decomposition), the protagonist starts methodically murdering all characters from Proust’s In Search of Lost Time. Language is a thing that Garréta ceaselessly probes, dissects, and investigates; how we say things and what we convey become objects of intense scrutiny.

In Not One Day’s postscript, Garréta reveals, though we’d seen this coming, that she didn’t end up adhering to her rules. What’s more, she also discloses that one of the vignettes is fiction. We should have seen this coming, too, since her foreword clearly laid out her reluctance to partake in confessional writing, not just because it seemed to be a trend to assign confessional characteristics to women’s writings, but also because the exercise is rooted in the fiction of the self. Thus Garréta’s work revolves around dismantling any reflexes we might have, as writers and readers. She roots her intellectualized reflections on desire into the concrete experience of desire, showing how we are simultaneously living and narrating ourselves at the time, and what kind of fictions underpin this constant dynamic.

The initial image of the sphinx in Garréta’s first novel seems to haunt the project of each of her subsequent books: a chimera-like assemblage of parts (the exact composition of which can vary) that remains enigmatic, that resists understanding. It is, at its very heart, the most accurate image of desire.