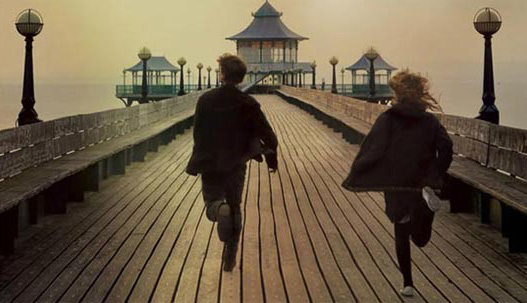 This is the first in a series of posts entitled 21st Century Fiction on Screen. In each entry I’ll be comparing a contemporary novel to its film adaptation.

Kazuo Ishiguro’s 2005 novel Never Let Me Go is both an unsettling allegory of systemic oppression, and an intimate portrait of three young people negotiating an impossible living situation. There’s a lot going on, both on the surface and beneath, and a reader couldn’t be faulted for thinking, “this will never become a movie.” Well, it did. To its credit, Mark Romanek’s 2010 film makes a game effort, convincingly capturing the dormitories and cottages that comprise the novel’s world. But ultimately the scope and ambition of the book prove too big for the big screen.

Before we even get to page one, Ishiguro lays a trap by setting the book in “England, late 1990s.” It won’t be clear for many chapters that we’re in a very different nineties from the flannel shirt and dial-up internet connection era we knew and loved, and so the reader is forced to consider some disturbing possibilities. Were there really schools such as Hailsham, where every student was not just an orphan, but some kind of outcast? If so, why did this happen? Is it still happening today?

The film Never Let Me Go stars Carey Mulligan, Andrew Garfield, and Keira Knightley. All three shine, and Mulligan especially brings tremendous depth to a relatively passive character. In interviews, she’s said she’d read the book several times, and that she lobbied hard for the role of Kathy. Mulligan’s deep dive comes through in her performance, particularly in Kathy’s unflinching tenderness toward Ruth. Still, there is only so far a cast can take a script.

The movie opens with on-screen text: “The breakthrough in medical science came in 1952. Doctors could now cure the previously incurable. By 1967, life expectancy passed 100 years.” In revealing right away that we’re in a different reality, the film lets its viewers off the hook. “Don’t worry,” it seems to say, “this doesn’t apply to us.”

Of course, it does apply to us, as many of society’s benefits come at the expense of our fellow human beings. Never Let Me Go, the novel, by envisioning a world superficially similar to our own, forces us to interrogate that uncomfortable truth. The subtle power of Ishiguro’s work lies in its depiction of an oppressed people becoming complicit in the prevailing power structure. Although it’s not made entirely clear until almost halfway through the story, (SPOILER ALERT!) all the central characters in Never Let Me Go are clones. They exist only to grow up and donate their vital organs until they eventually “complete,” their lives often ending before they turn thirty. The unasked question nagging throughout the novel is, why do they go along with this horrific scheme?

Kathy and her friends start internalizing their difference in early childhood. She encounters an adult and realizes, “she was afraid of us in the same way someone might be afraid of spiders.” Upon reflection, Kathy adds, “So you’re waiting, even if you don’t quite know it, waiting for the moment when you realise that you really are different to them; that there are people out there, like Madame, who don’t hate you or wish you any harm, but who nevertheless shudder at the very thought of you…” Otherness becomes a part of her makeup, even if she can’t pinpoint how it happened. “All this stuff was there in our heads without us ever having examined it properly.”

As an adult, when Kathy’s friend Ruth is due to have her vitals removed, she has accepted her fate. “I was pretty much ready when I became a donor,” Ruth says. “It felt right. After all, it’s what we’re supposed to be doing, isn’t it?” If Ruth herself believes this, then what chance does she have at escape?

Ruth delivers more or less the same line in the film, but with bitterness and sarcasm. This makes sense in that context, since no effort has been made to convince us that the characters would willingly submit to their plights. The movie, therefore, requires a different explanation. While the book makes almost no mention of safeguards to keep tabs on the precious clones, the film contains several shots of our protagonists holding their wrists to electronic tracking devices. The clear implication is that Ruth, Kathy, and Tommy are trapped by a technological system so advanced that there’s no means of escape. After all, they have a chip implanted in their bodies. This seemingly minor change completely subverts the carefully crafted psychologies of Ishiguro’s characters.

The film stays faithful to the book only in the broadest and most literal of ways. It’s true that both Kathy and Ruth have romantic relationships with Tommy in each version. But the novel takes great pains to establish Ruth and Kathy’s childhood friendship, long before dating enters the equation. The girls form a “secret guard” to “defend” one of their teachers, take turns lying for each other to improve their social standing, and rally their classmates around finding the other’s lost possessions. None of this makes it into the movie, where young Ruth and Kathy are defined almost entirely by their interest in Tommy. This simplistic version of the girls’ relationship carries forward into adulthood, where Kathy is depicted as a pining virgin shut out of Ruth and Tommy’s sexual paradise. In the book, Kathy isn’t remotely obsessed with Tommy as a love object, and she has plenty of sex with willing partners.

Perhaps the most dramatic departure in Never Let Me Go, the movie, occurs in its final lines. The film ends with Kathy musing that it might not matter that she and her friends are forced to die young. “What I’m not sure about is if our lives have been so different from the lives of the people we save. We all complete. Maybe none of us really understand what we’ve lived through, or feel we’ve had enough time.” This sentiment, though interesting on its own, is nowhere to be found in the novel, which focuses on how Kathy, like Ruth, accepts that she was only put on this earth to be a donor. As Kathy says in her heartbreaking final lines, “…though the tears rolled down my face, I wasn’t sobbing or out of control. I just waited a bit, then turned back to the car, to drive off to wherever it was I was supposed to be.”