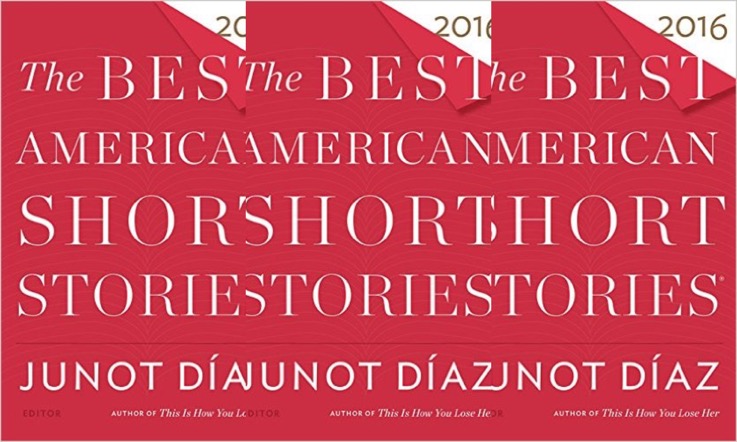 We have made it to 2017 with little protest (to the passing of last year, that is) and a whole lot of wonder about what to think of the previous twelve months. With an array of emotion fluttering over the land like strong winds, the confusion and misunderstanding and, for many, fear and distaste, give reason for feeling at least mildly content about having made it through another day every day. The call for unity and solidarity is widespread, as it often is during times such as these. The literary world, as it often does for many of us, hasn’t fallen short…not in form, at least.

After a first read-through, The Best American Short Stories 2016, guest-edited by Junot Díaz, does not disappoint in the category of diversity, with stories written by women, men, people of color, immigrants; stories about children; stories of coming to America and leaving America and being in America when one doesn’t want to be and not being in America when one wants to be; stories of the rich and of the poor; stories with violence and alcoholism and love and heartache. The net cast over the spectrum of possible situations is quite wide, and it has caught a few (personal) gems, as well some lessons on the vast meanings of what America could mean to any given person who has, or has not, experienced it.

In the introduction, Díaz writes extendedly about his deep appreciation for the short story form—not only appreciation, but in fact takes a stance on its importance and unique quality:

“This is a form that is unforgiving as fuck, and demands from its acolytes unnerving levels of exactitude. A novel, after all, can absorb a whole lot of slackness and slapdash and still kick massive ass, but a short story can unravel over a pair of injudicious sentences…Novels might be able to summon entire worlds, but few literary forms can match the story at putting a reader in touch with life’s fleeting, inexorable rhythm.”

It is in those fleeting moments that capture the brevity and vulnerability of life where the short story thrives, forcing our eyes briefly off the page, accompanied by a deep sigh before returning to the action. I may be biased as a short story writer, but it is also in these moments that I personally not only piece together how I remember all stories, short or long, but my own life. You know, those “Did that really just happen?” and “I can’t believe this!” moments, or (and often times especially) the “WHAT?” and “Oh shit!” and “Finally!” moments? Relationships can last on those moments; they can also die in them.

Which brings me to the primary reason I have continuously found myself fervently sifting through Díaz’s selected stories once or twice every week since I picked it up, that being the theme of cherishing community and enriched connection, and the importance of those matters when isolation looms like storm clouds.

Too many stories in this collection have many moments powerful enough to, as Díaz puts it, “break hearts bones vanities and cages,” so I’ll stick to one story that, after my first read through, still holds to my heart. It’s Ethiopian-American writer Meron Hadero’s story The Suitcase, from the Missouri Review. Saba is behind on being prepared to leave Addis Ababa for Seattle, time ticking away while her relatives battle over whose items are most important to Saba’s travels and stay in the States. With only one suitcase’s worth of room and a specific weight restriction she is currently over, Saba contemplates the importance of this seemingly simple family quarrel:

“Saba’s suitcase offered coveted prime real estate on a vessel traveling between here and there. Everyone wanted a piece; everyone fought to stake a claim to their own space. If they couldn’t secure a little spot in some luggage belonging to a traveling friend, they’d not send their things at all…An empty suitcase opened up a rare direct link between two worlds, so Saba understood why relatives and friends wanted to fill her bag with carefully wrapped food things, gifts, sundry items, making space, taking space, moving and shifting the bulging contents of the bag.”

The majority of the story takes place during a conversation between Saba’s family members arguing why their item surely should not be removed from Saba’s suitcase, for how else would she know family loves her overseas, or how else would she find this or that culturally emblematic item in America? At last, with no time left to spare, Saba empties her second suitcase full of her personal items with those the family is bantering about, and in the nick of time with belongings of her past preparing for her future:

“Her family and friends of family watched from the waiting area as she moved quickly through the line to get her boarding pass. They looked on as the two suitcases were weighed and thrown on the screening belt, and they saw her pass the main checkpoint. Every time she looked back to the lobby, she could catch glimpses of them on tiptoe, waiting to see if they might connect with her one more time.”

This story, and the many like it in the collection, captures the facets of America that ought to be cherished more than fought over—that we are a collective from everywhere, we bring with us the items of our creations into the interactions with one another yet to occur, and we share unity in those differences. And though the short story in and of itself may not be the primary weapon wielded against the minds of those more intolerable, I stand by Junot Díaz in confirming that its ability to put a reader “in touch with life’s fleeting, inexorable rhythm” has the power to get us moving together.