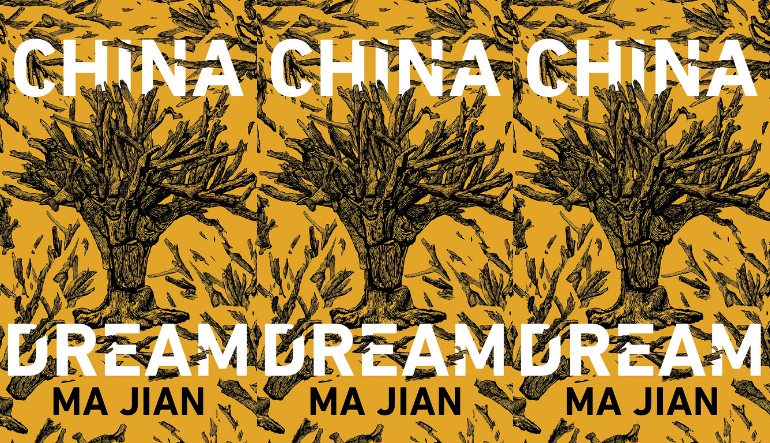 In the foreword to his novel China Dream, Ma Jian describes how the term “brainwashing” was coined by Maoists in the 1950s as xǐnăo. What he doesn’t mention is that the term reached English via the anti-communist journalist Edward Hunter. In a testimony to the House Un-American Activities Committee (HUAC), Hunter explains that “Brainwashing was the new procedure . . . to make people react in a way determined by a central authority, exactly as bees in a hive.” In China Dream, Ma, a fierce critic of Xi Jinping’s regime who currently lives in exile in London with his wife and translator Flora Drew, satirically takes the idea of brainwashing even further—why stop with the conscious mind? Why not control and replace everyone’s dreams?

This lofty goal is spearheaded by Ma Daode, the director of the China Dream Bureau. He’s an aging bureaucrat, and the book opens with him napping in his office chair, “his shoulders hunched over and his pot belly compressed into large rolls of fat.” Despite his appearance, Ma Daode has done quite well for himself. He is the vice chair of the Ziyang Writers’ Association “and has gained a small following from aphorisms which he posts online” (though half of the copies of his self-published essay collection remain unsold in his office). He has so many mistresses that he has to use different cell phones to text with them. And as a bureaucrat, he has collected so many bribes that a gifted mooncake filled with a bar of gold fills him with misery, since he was just “in the mood for a proper mooncake.”

As Director of the China Dream Bureau, Ma Daode is tasked with the development of the China Dream device. This is a natural extension of Xi Jinping’s “China Dream of national rejuvenation,” where “if the communal China Dream is to fully impregnate the mind, all private remembrances and dreams must first be washed away.” The China Dream device is essentially a Freudian project taken to the grandest scale: each person’s manifest content (the dream that they can remember), is monitored, and, when needed, replaced with state propaganda. The optimal result? Individuals would finally behave as bees in a hive.

But any Freudian project must grapple with not only the manifest, but also a dream’s latent content too—that deeper meaning revealing the unconscious mind. As Freud concluded in “Beyond the Pleasure Principle,” the dreams of those afflicted with a traumatic neurosis bring the dreamer “back into the situation of his accident, a situation from which he wakes up in another fright.” Therein lies Ma Daode’s problem. The more he tries to forget his past, the more it comes back with greater and greater intensity.

Ma Daode is haunted by his actions during the Cultural Revolution. Every part of Ziyang City holds a memory, but Ma Daode’s remembrances of the past include the violent struggle between Red Guard factions, his parents’ suicide, and the denunciations that destroyed families, friends, and lovers. This past violently collides with Ma Daode’s present, causing him to feel “his grief weighing down like an overripe pear that longs to drop from its branch but is afraid of smashing into pieces.” Not even an orgy in a Red Guard-themed nightclub can save him from his memories. When one of the women in his private room tries to calm him down by saying that they’re playacting “regular Red Guards offering our bodies to senior officials,” Ma Daode lashes out. “Every Red Guard has to choose a side!” he says. “When I was sixteen, I killed a boy who was one metre eighty tall, simply because his faction wasn’t as revolutionary as ours.”

The violent intermingling of past and present ultimately threatens Ma Daode’s career. During his “Golden Anniversary Dream: China Dream”—a mass vow-renewal of elderly couples—Ma Daode begins to lose his grip on reality. In a speech to all those gathered, he announces:

The China Dream eradicates all dreams of the past and replaces them with brand-new dreams! As I look out at your smiling faces, I can’t help think of my own mother and father who lie buried in the ground beneath us. Sadly, the relentless struggle sessions they were subjected to proved too much for them to bear, so they are not able to join us today.

It is clear in our reading of Ma Daode that the Freudian project to turn China’s citizens into honeybees is bringing the nation to the verge of a colony collapse.

While these satirical descriptions of modern China are ultimately entertaining, China Dream’s strengths lie in its description of the horrors of the Cultural Revolution—Ma Jian has a Proustian sensibility with the brutal eye of Isaac Babel. At one point, Ma Daode journeys to a village that is set to be demolished to make room for the Yaobang Industrial Park. During the riot that ensues, protestors lob a petrol bomb at the police. Ma Daode smells the petrol fumes and is immediately taken back to his Red Guard faction’s headquarters, where it “reeked of diesel, printing ink and garlic.” He, too, remembers how a rival Red Guard soldier struck his comrade “in the head again and again with a hand grenade until his eyes rolled back and his legs convulsed.” Ma Daode tries to cure himself of his nightmarish reality through the use of potions and elixirs, but by the end of China Dream, the reader is left with the feeling that trauma and its flashbacks are more powerful than any kind of state-sponsored China Dream. The traumatic dream is one where “the past and the present form a tangled web from which it becomes impossible to break free.” The traumatic dream cannot be forgotten or effaced.