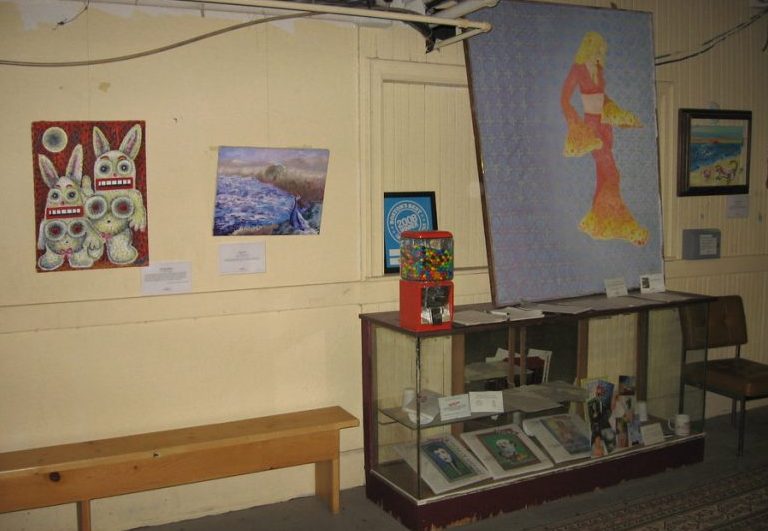 In the basement of three small theaters in Massachusetts lives a collection of some of humankind’s worst artistic efforts: the Museum of Bad Art. Everything in the collection is gloriously, earnestly bad (the curators reject anything that seems bad by intention). You can go there. You should. The photograph above is just a first taste. Sunday on the Pot with George will impress you with the richness of its detail. You won’t soon forget Lucy in the Sky with Flowers—those frolicking legs! Or Peter the Kitty, with his cluster of feet and unsettlingly human expression. Or Johnny McGrory and his spiffy hat. Or The Cupboard Was Bare (just look at it. I’m not sure what to say). You may in fact be seeing them when you close your eyes until the day you die.

The Museum of Bad Art has a literary cousin that has also brought me joy: the anthology Very Bad Poetry, edited by Kathryn and Ross Petras. It’s a treasury of fabulous failure. Julia Moore (1847-1920) seems to have had a poetic obsession with dead children (see “Little Libbie”). Solyman Brown (1790-1876) penned the educational “The Dentologia—a Poem on the Diseases of the Teeth.” The editors deemed “A Tragedy” by Theophile Marzials (1850-1920) the worst poem ever written in English; its first two lines read, in their entirety, “Death!/ Plop.” But my own favorite is “Ode on the Mammoth Cheese, Weighing over 7,000 Pounds,” by James McIntyre (1827-1906):

We have seen the Queen of cheese,
Laying quietly at your ease,
Gently fanned by evening breeze—
Thy fair form no flies dare seize.

All gaily dressed soon you’ll go
To the great Provincial Show,
To be admired by many a beau
In the city of Toronto. […]

Of the youth—beware of these—
For some of them might rudely squeeze
And bite your cheek; then songs or glees
We could not sing o’ Queen of Cheese.

We’rt thou suspended from balloon,
You’d cast a shade, even at noon;
Folks would think it was the moon
About to fall and crush them soon.

The rhyme scheme is something, but it’s the actual addressing of the beloved cheese that gets me. And the cheek-squeezing/biting, and the whole last unexpected stanza.

I used to have my high-school Creative Writing students imagine the artists responsible for the works in the Museum of Bad Art. I also had them try to unseat Theophile Marzials by writing the worst poem possible. These prompts weren’t just for comic effect. The imagined painters and sculptors were often characters of real, idiosyncratic depth; and many of the students turned out to be superb terrible poets—showing more consciousness and control, sometimes, than when they were trying to be good. “Tiger, tiger, burning bright/ Because you are on fire…” wrote one.

I also wanted to showcase these terrible works of art for a quality I think they share with most (maybe even all) fantastically good art: they convey a distinct and strange vision. Whole oceans of skill, taste, and self-awareness separate James McIntyre from W.B. Yeats, or Virginia Woolf, or Sharon Olds, or Karen Russell. The water is very, very wide. But what these writers do have in common is a sense of ambition. They’re all really aiming at something—and something unsettling, weird (even if in the hands of good writers the weirdness is subtler and slipperier).

There are many ways of talking about this fertile strangeness. Caitlin Horrocks wrote an essay that I love for the Kenyon Review, called “The Glory of the Bad Idea.” At the Bread Loaf Writers’ Conference this summer, I heard both Maud Casey and Laura van den Berg give wonderful talks on mystery—the unanswered, unanswerable questions that often lie near great writing’s heart. Most of my favorite stories and novels have this quality: it’s there in the gaps between the voices in Alice Munro’s “A Wilderness Station,” in the tricky darkness of Shirley Jackson’s We Have Always Lived in the Castle, in the beautiful, odd verbal gymnastics of Nabokov, and in Kelly Link’s merciless dream-logic. Maybe it’s by trying to capture some of the strangeness of being in the world that art vaults the vast, dead middle and becomes something living: a short story that breaks people’s hearts. Or a pointillist portrait of an old man in his underwear.