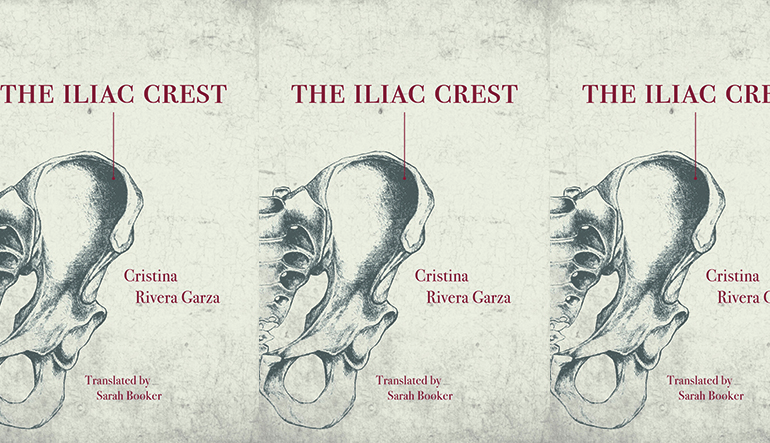 In The Iliac Crest, a novel named for the curved upper border of the pelvis’s most prominent bone, Cristina Rivera Garza draws a palpable connection between gendered language and gendered violence. With rich, corporeal symbolism, she not only demonstrates how gender classification and the language that serves it disappear marginalized voices from literature and marginalized bodies from the world, but also asks how this tiered disappearance might be tempered.

The iliac crest is noted as revealing, at a skeletal level, biological sex; it supplies the curvature considered feminine to the female hip, and the straight hip supposedly indicative of masculinity to the male. Inside the novel, it is a sexualized point of focus, a locus of gendered desire, for the unnamed protagonist.

In a coastal medical community this protagonist, a doctor, works in a local sanatorium. One night, an old lover (who he calls The Betrayed) and a woman who claims to be Amparo Dávila, a Mexican author, arrive separately at his home. Gazing at the alleged Dávila, he recalls, “What really captured my attention was her right hip bone,” which conjured “the characteristic throb in my lower belly.” The iliac crest is a source of comfort because it is both border and definition, expounding to him what he already knows: the curve it gives Dávila’s body is entirely female, and the desire he feels toward her is reassuringly male.

As the crest’s alleged delineations commence to fall away, we learn that the narrator is not only a man who is also a woman, but a man who was, at one time, a tree. Both his former femininity and his arborescence are each stated matter-of-factly, with no ring of metaphor, and the initial confusion this induces in reader and narrator alike serves a generative purpose: to undermine categorized identity, to destabilize the terms we rely on to parse ourselves and the bodies around us.

Rivera Garza has a particular purpose in undercutting the terms that govern selfhood. The novel’s expansive subtext includes the backlash against NAFTA—namely the unexpected side-effects of trade liberalization in the manufacturing-assembly industry for women. Sergio González Rodríguez describes these repercussions in The Femicide Machine, outlining how the introduction of assembly line factories in Ciudad Juárez saw female and male workers integrated into the same production space, and how the new role of “woman as worker” obliterated the paragon of feminine purity:

In Ciudad Juárez, the masculine perception that every woman is merely a sexual object results when stereotypes surrounding the “pure woman”—wife and mother—are exhausted. A woman who works and has no need for masculine protection becomes the antithesis of the ‘pure woman’ fantasy.

This classification thus compromised, murderous and sexualized violence rose rapidly during the 1990s, which saw the term feminicidio first come into use. The barbaric tenor of these attacks, combined with the sheer amount of female bodies that are still being lost, is an explicit point of reference for Rivera Garza:

According to the National Citizen Femicide Observatory, six women are killed every day in Mexico…Between 2005 and 2013, 1,500 women… disappeared… In 2016, 1,185 femicides were committed between January and mid-October.

The Iliac Crest sees “disappearance become a plague” that strikes down women. Dávila spends the days writing about her own “disappearance” while the narrator muses that “Only a disappeared person could have materialized on the coast as she had. If she had been Someone, for example, they would have arrested her at the entrance… They would have already made phone calls for Someone.”

These brutalized bodies have borne out the ramifications of being marked with a particular gender, and Rivera Garza literalizes the perils of being ascribed “she,” “her,” “woman,” and “girl” as ideological iterations that expose flesh to a very particular calibre of bodily harm, while also making that harm invisible. With this premise, that the language pinned to our bodies determines the kinds of violence we encounter, Rivera Garza then goes to the source to both revoke and re-inscribe this linguistic power. As such, embodiment is flooded with alternative textures as The Iliac Crest’s narrator comes to experience something of the exclusionary violence meted out to female bodies—“In their eyes, I had truly ceased to exist.”—before recalling his time as a tree, “images of my life as a tree appeared from some remote place in my brain…My half-buried, half-liberated body.”

Rivera Garza has described this effect as “working with language to produce the effect of presence and irruption,” and her prose produces an effect akin to certain of Francesca Woodman’s self-portraits, images in which Woodman also works to corrupt definition at a perceptive level. Through refraction and haze, reflection and shadow, Woodman makes herself—the subject—slippery and ungraspable. The subject is there, but we don’t know what to call her or how to consume her. As Rivera Garza disrupts the gendering of language, Woodman subverts the gendering of the gaze, and each evidences an irruptive process that sees distinctions liquefied. It becomes impossible to pin a set of connotations to a single body, and our descriptive capacity is challenged: “Those women were just as feminine as the tree I had once been.”

Rivera Garza has said that she believes that “Rather than merely depicting reality, writing produces reality.” Inside this novel, language has rendered a reality in which distinctions themselves, rather than the bodies which trouble them, are corroded.

Importantly, the iliac crest is never mentioned by name. We need turn to bones as evidence, after all, only when we have no flesh left. Rivera Garza suggests there is ample material within the realm of the embodied for us to instigate this generative irruption. Either by plumbing anatomy for other truths or foregoing its observations entirely, at the level of flesh we can disrupt and subvert so that it becomes “impossible to close your eyes. For all the terror, for all the commotion, for all the unease you feel, you cannot close your eyes. You see. You see voraciously. You cannot stop seeing.”