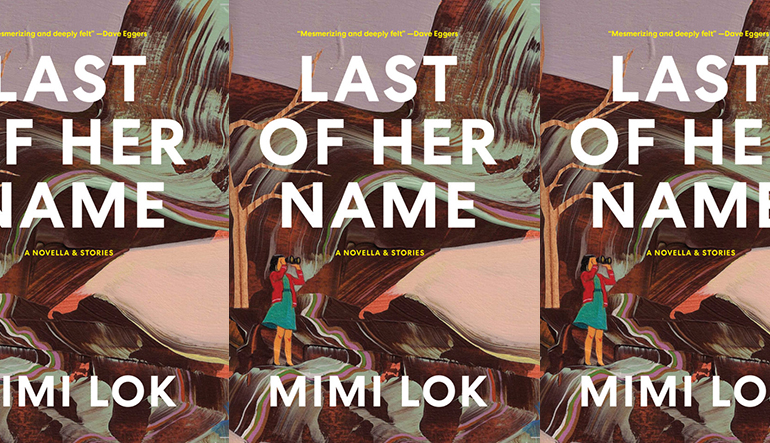 In her debut story collection, Last of Her Name, Mimi Lok is not interested in providing answers or pat endings. The stories open up, instead, in the way of myth or fairy tale, transcending the story itself. All eight pieces—seven stories and one novella—feature Chinese women, and while there are some clear links among them, the tightest connections lie in theme and subject matter. Lok has said that she believes that the characters could be “imagined reincarnations of each other,” and that feels very true. Although the locations and time periods vary—Hong Kong during World War II, the UK in the seventies and eighties, present-day California—the characters feel linked in their sense of displacement and isolation, both connected to and separate from their families and their shared histories.

The novella, “The Woman in the Closet,” is the clearest example of this type of displacement. Granny, whose son and daughter-in-law want her to move to a nursing home, ends up living first in a tent village and then in the closet of a young man for over a year, without his knowledge. We feel Granny’s sadness over her situation, and yet we also see the way in which she continues to move forward, refusing to feel sorry for herself. She cooks and cleans for the man in secret. She draws gardens and animals and reproductions of famous paintings: “She taped all of these paintings, finished or not, to the side and back walls of the closet, where they hung over her sleeping head like dreams in waiting.”

Granny is ultimately discovered, and after a police inquiry, Lok leaves her point-of-view, switching instead to the point-of-view of the young man. It’s a fascinating craft move: the story abandons Granny, just as her family has. We watch the young man struggle with his feelings toward Granny, although he, too, in the end, moves on with his own life.

While “The Woman in the Closet” is told in a traditional, linear fashion, a number of the stories are more experimental in form. “Wedding Night” follows a Chinese couple who both had been attracted to each other when younger and now come together later in life after the woman returns to the village. It begins somewhat traditionally, but then moves back and forth in time, asking the reader to build the narrative from disparate pieces. At times the pieces are composed of scenes; at other times, they are short, brief descriptions or thoughts. The prose is lyrical, and the following passage shows how Lok plays with a fairy tale ending:

She came back. And married him under an almost full moon on a summer evening. Drunken strings of lights shine through the trees and over the tops of walls, red firecracker paper scattered on the ground. Men and women drink, talking about the couple in a general manner. Carcasses litter the tables. Foam clings to the sides of half-drained glasses. She came back.

How quickly the description of the wedding dissolves into more ominous images. And yet the bookending of the passage, with “she came back,” unites the positive and the negative, the fantasy and the reality. The act of marriage, of bringing together two different people, is never simple and always complicated. By playing with form here, Lok deepens the meaning of the story by showing these complications in the form as well as in the content.

The complicated bonds of marriage and family occur often throughout this collection. The title story, “Last of Her Name,” moves in time and place to show the connections between a mother and a daughter in their teenage years. In “Bad Influence,” a young woman deals with her often-absent brother. In “A Reasonable Person,” a young couple is staying in a hotel for the night as the husband attends a work convention. After the dinner, the couple returns to their room and after the husband falls asleep, the wife climbs onto a chair and unhooks pieces of crystal from the chandelier. Later, in the morning, when the husband is in the shower, she reattaches all the pieces save for one. On the plane home, she holds the crystal:

She thinks of an apple being slowly peeled. Then she thinks of bolts of silk spilling out with quick drama. She tells herself that somehow it will happen, it must happen: a time when she will be able to tell someone everything, and not want or fear anything.

The wife’s profound isolation and loneliness are palpable here. We can feel the sharp edge of the crystal in her hand. We can smell the freshly cut apple. We can see the colors of the silk. And that all allows us to understand her fear and her desire.

It is to Lok’s great credit that she can create layered stories in just a few pages: “A Reasonable Person” is less than four, and “Accident,” the story of a man who has just been in a car accident, is less than two. While the novella and the longer stories are detailed and haunting, the shorter ones work more like good poems, where the ends open up and out, recasting all that has come before. Lovely echoes exist from one story to another, as themes are touched on again and again. These are not stories that have traditional beginnings, middles, and ends, but stories that always ask the reader to feel, think, and consider.

Tags:Last of Her Name, Mimi Lok