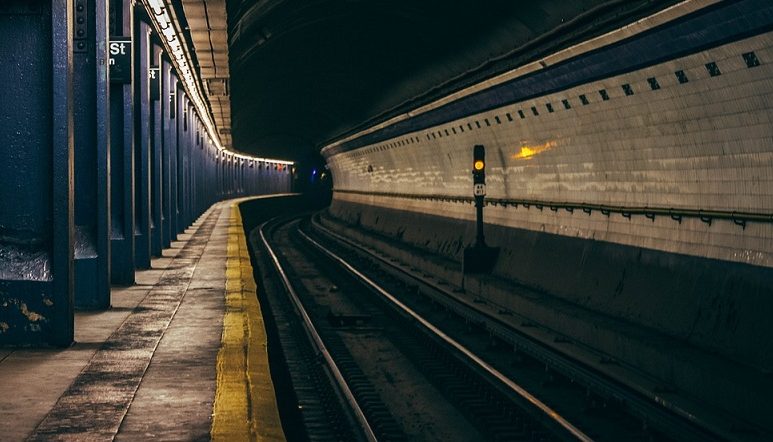 “My parents bought that for Mary Cantwell,” my new landlord Bill said.

He was referring to the most magnificent oven I’d ever seen: an old white Chambers Stove. I had no idea who Mary Cantwell was, but she sounded important. It was 2001, and we were standing in my new bachelorette pad at 44 Jane Street, a home for my four-year-old daughter and myself.

“It’s like a dollhouse,” I gushed to my daughter Eve later that day, so proud of my find, our new home. For Eve, a girl who loved dollhouses, I was hoping the idea of living in one might be considered a top prize. “You even have to duck your head when you walk through the second gate!”

So we packed up and moved from our two-parents-and-a-child place on Bank Street, with its long hallway leading to two beautiful bedrooms, one for her and one for her dad and me, to a mere five blocks away on Jane, just the two of us. With the recent separation from my husband, the West Village suddenly seemed sprawling, though it wasn’t, as we transferred from one west-of-Hudson-Street residence to another.

“Mary Cantwell lived there, you know,” my new neighbor Arthur told me by way of introduction one afternoon.

Arthur, a man in his seventies who’d been settled in his building for decades, began sharing stories with me of the neighborhood, from the days when local politics and culture ruled more than money did. He told me that he sometimes hung out with Susan Brownmiller, who lived nearby, and that his late wife had been the book cover designer for Jonathan Livingston Seagull. He kept bringing up Mary Cantwell, and at that point, I’d done my research:

Cantwell had been an editorial writer at the New York Times for sixteen years, and helped create and shape the empowering “Hers” column there. She’d also worked at Mademoiselle and Vogue, and had penned three memoirs—one in particular about the different apartments she’d lived in around the Village.

I was excited to be part of this history, that I’d found my way into her story. And Arthur was adorable in a fatherly way, so when he said, “Come inside. I want to show you something,” I complied.

His home, at 42 Jane, was the same ground floor apartment as mine, but at least three times the size. He drew me to his study, lined with copious editions of Jonathan Livingston Seagull, then pulled from a side shelf a worn copy of Mary Cantwell’s Manhattan, When I Was Young.

“Your landlord Bill is mentioned in this book,” Arthur said as he handed it to me.

I’d been meaning to find Cantwell’s memoirs on my own. Now here it was.  Because I’d also unearthed in my legwork about her another commonality between she and I: that her Village-apartment journeys had ended in divorce, in a chapter entitled “44 Jane Street.”

“Other wives, most wives…they had, it seemed to me, certain tools I would never possess, the marital equivalent of street smarts,” Mary Cantwell wrote. “What was their secret? What did they know?”

I met my husband James through the friend of a friend, on New Year’s Day, 1994. Instantly simpatico, we reveled in our own ecstasy and denial at being two arty freelancers who’d found each other. He was a writer turned dancer, and I was a dancer turned writer, and we married before the year was up.

Our lives were old-school Village hippie. We’d take Kundalini Yoga in the mornings, have Kundalini sex at noon, then I’d spend the afternoons making money teaching creative arts at after-school programs around the city. I’m still not sure what he did those six years of our marriage, besides dance and sell fish at the Union Square Farmer’s Market. At night we’d make spaghetti with a rotation of three sauces—tomatoes, vegetables, meat—and write bad screenplays. We were a unit, albeit a rustic one, having fun, nearly brotherly in our love.

And then came Eve. Who we adored more than anything, and as it turned out, more than each other. Overwhelmed by the realities of infant and then toddler care, neither one of us had come up with a plan as to how exactly we were going to do this whole thing. Our arty operation fell apart.

James had been there for me when my dad died soon after we met and when I birthed Eve drug-free for thirty hours, and when she cried at night he was the daddy our daughter needed. But all I’d known throughout my life was that I wanted an ally, an accomplice, a collaborator. Once Eve came along, he wasn’t that.

I’d never heard of “episodic alcoholism” until I realized several years in that’s what James had, as he’d alternated between three months of drinking, and three months of not. I don’t think it was the alcohol per se that ended us, but in my eyes, his laissez-faire nature was not addressing this issue. And when he delved deep into that vice at one of Eve’s preschool fund-raising events—luckily it was adults only—I had to escort him out of there, after which we had the most brutal fight of our lives.

The humiliation and the burden of cleaning up after him proved too much for me to tolerate, as he spewed the worst of his feelings onto me, all night long. Where I once had sought compassion for him, as he had done for me, I chose instead to save that same consideration for myself.

“It was time to go,” Mary Cantwell wrote….

She had not wanted to travel on that work trip to Paris, leaving behind her husband B. and two daughters, at 44 Jane Street. She’d apologized to him beforehand, knowing intuitively, instinctively, that there would be shift within her. And there was. She’d never been on her own before, didn’t know what that felt like, relying as she always had, first on her father, and then her mate. It was as though she could only exist in the compartmentalized versions of who they thought she should be. Who was she really, without them? And who was I, without James and my married identity? I’d never been encouraged to embrace, on my own, the gift that was my uniqueness.

Though devoted to the concept of forever marriage, Mary could not deny the lure of new freedoms, as she worked and wrote, dined with new friends, had a risky flirtation with an elegant Frenchman. She realized where these life changing moments were taking her—away from her old life, from B., her security—yet she wasn’t willing, or able, to give that up. Similarly, once James and I had turned the corner toward our inevitable end, like Cantwell, “I had to think, and I could only do that if I was alone.”

After our big blowout, James found a sublet elsewhere in the neighborhood, and I forged ahead as a single mother, making things up as I went along, plowing toward the unknown, refashioning the apartment to suit our needs. The living room of my new place, with its low tin ceiling and impressive parquet floors and two windows facing Jane Street, became my bedroom. I’d traded in my king-sized marital bed for a queen, and put it under the windows. It wasn’t until I lay down that first night in Eve and I’s new home, exhausted, exhilarated, that I felt exposed, and vulnerable. Just a brownstone façade and two gates separated me from the outside.

Turning away from the windows, hugging myself, I could almost see Eve, safely tucked inside, where it was warm and cozy; I’d made sure of that. I knew how much she missed James, and I tried to compensate. Her room was tiny but special, as I’d placed her in the oversized kitchen area, extending a sleeping niche that was already there. We put a mini loft bed inside—“So grown up!” I exclaimed—and we cut a window hole into the extension wall, for which I made orange gingham curtains. Then we topped off the whole thing with a sliding wooden door.

Every time I closed that door at bedtime, she’d peek her head out the orange curtains, and I felt for her. Eve, with her enormous blue eyes, and eyelashes so long people thought she was wearing mascara. This dollhouse-like bachelorette pad I’d dreamt up in my head and tried to manifest into reality was maybe not as exciting for her as I was hoping it would be for me. She’d already cried for her daddy in our fancy claw-foot bathtub, and called out his name when things didn’t go her way. I was wrenched inside as well, though I tried not to show it. I did not know how I would be able to help her, while also helping myself.

Just like Mary, “I had long talks with me,” as I developed new muscles, finding strength within my new home and myself. I became a manuscript reader for publishing houses, and while Mary went off to the Times, I wrote a monthly column for The Villager, which pleased my neighbor Arthur very much. Eve and I forged new Village routes, from Bleecker Playground and Li-Lac Chocolates, to P.S. 41 and also the secret garden at St. Luke’s, where Mary and her kids had hung out. Every Thanksgiving-to-Christmas, Eve worked for the Vermont-family Christmas tree sellers, the Romps, who set up shop right on our corner, and then she’d run across the street with her friends for hot chocolate at Bonsignour. I used Mary’s big white oven to make cakes and cookies and brownies, and opened an underground bakery on Sundays, just outside those gates of our private entrance.

I learned that single motherhood is a misnomer—I could not do it alone. So I found great helpers, in the form of childcare, as I sought to expand Eve’s world. Mary also seemed to trust her children more with anyone other than herself, as she surmised her intense love for them was overpowering, nearly an interference. In the same way, I, too, had to let go, and as long as Eve was happy, as long as James upheld his determined sobriety, I could finally indulge in one of the positives about my child having two homes: the weekends off. Being alone, sans Eve, meant reengaging with my independence and womanhood, and when Mary agreed to her divorce, she came to terms with hers, too.

I had one boyfriend who excelled at bringing newly divorced women out of their sexual shells, and another, three years later, who showed me something else. He and I didn’t last, but our time together had meaning; he’d become an ally. I’d discovered, as Mary Cantwell reflected: “All my bits and pieces were coalescing into one self-sufficient self….I was working without a net—my husband—and I was not falling down.”

Nearly ten years later, I returned to Arthur the book that he’d loaned me, Manhattan, When I Was Young. My daughter and I were moving out, on to our next life adventure, in Brooklyn.

Eve and I had outgrown our apartment, even after we took down her loft bed and put in a twin. The neighborhood had become prohibitively posh, particularly after Billie Joe Armstrong from Green Day moved into the top floors of our brownstone, and Jennifer Aniston bought two pads around the corner. Brooklyn seemed ideal, and though we loved our new bigger space, I’ve never stopped looking for a place like Jane Street. Inside the apartment at 44 Jane, Cantwell came to terms with the dissolution of her marriage, as I did mine. She moved out when it was over, and I moved in. She’d found courage—and herself—and it was precisely in our shared space that I found the same.

Tags:Manhattan When I Was Young, Mary Cantwell