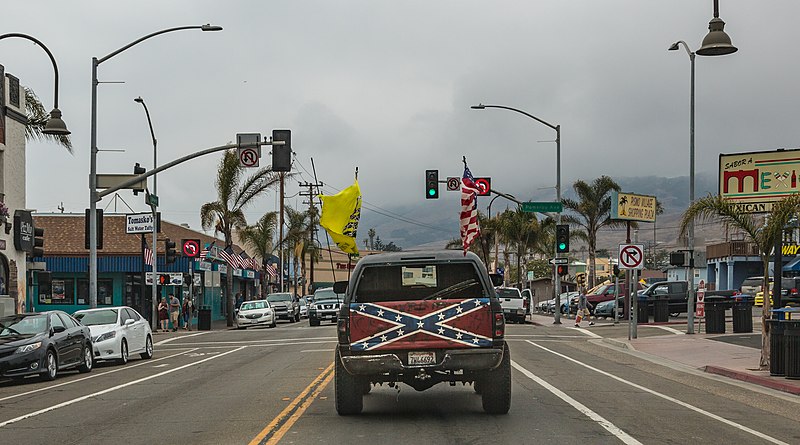 I’m driving behind an old Ford pickup on State Highway 70, cutting through the New Jersey Pine Barrens. The road is straight and thin. No neighborhoods, gas stations, or stop-in-shops—just a distance between here and there. The travel is longer this way, but no traffic. In between mile markers are entrances to dirt roads, some large enough for a one-way vehicle and some only for an ATV. Yellow Deer Xing signs are frequent. And on either side of the shoulder is an endless growth of trees, an incomprehensible green and brown that you can’t decipher at this speed. The sun hasn’t set yet and is still stretching itself on top of the tree-line like a red and orange mist. It’s easy to get lost here, to make one wrong turn—maybe end up between crosshairs or bear traps. The cell phone service is poor and so is the FM/AM.

At this point, I’m in silence, except for this truck that is motoring slow, and its exhaust pipe chokes like the engine is cutting off. I’m in a rush but can’t pass over the double-solids. Smoke billows, and the dual rear-wheel tires kick up dirt whenever it accelerates. The truck bed is rusted, exposing the primer. Still visible, though the paint is chipped, is the red, white, and blue star-crossed Confederate flag glorified on the tailgate. There’s a bumper sticker underneath; I speed up to read it. “Heritage not Hate.” I stay on the truck, pressing the gas, almost tapping the hitch—wanting to touch it. I recognize this rage. I’ve felt it before; it hollows me out, like being struck in the gut. But the air doesn’t escape; it stagnates, and buries deep inside of me. This rage, it fills my lungs—sharp angry breaths, the kind of breathing in flight or fight. I want to fight. I want to hurt something.

You and I spent so many nights like bugs, growing and changing rapidly while cocooned in our sleeping bags and staring at glow-in-the-dark sticker-stars on the ceiling. Eighteen years ago, we talked of what little life we had, which girls we liked, who would start in that weekend’s basketball game. We shared the secrets of our families—the things our parents argued about, which siblings we loved more. It was as if we put an ear to each other’s hearts and said—I’ll listen to the things that make you happy, that make you sad; I’ll care. I’ll be your friend. That’s why it hurt so bad. It’s always the ones closest to us that break us the most.

At first, the change started small. You traded your Sixers jerseys for hunting camo—the leaf-patterned shirts, hats, hoodies. It seemed you wanted to blend in, so we stopped playing basketball together and then the sleepovers ended. Instead, you followed those dirt roads into the Pine Barrens and found yourself different; you found yourself a better shot on a trigger than with a ball. I was as disappointed as any kid would be when losing a friend, as if something was cut off from me. But the real betrayal was one day in homeroom, before the hallway chatter and bell-ringing commotion, when you sat far from me and pointed, to some other kids, to the front of your new shirt. They said things I don’t remember but clapped their hands and rallied attention. And then, as if just to face me, you turned your torso. I saw it, the Confederate Flag imprinted on your chest and, in large, vapid letters, “Mississippi Justice” with a noose on the back.

I wondered how you could just become someone else, how your body could remain the same but your heart could change—how this thing, this celebration, this honoring, this remembrance of bigotry could bud inside of you and grow—grow quick and easy and as encompassing as any teenage fad. And yet, you ate breakfast at my house, at my parents’s table, with my black parents. My friend who watched every NBA Friday night tipoff on one of our couches, sharing a bowl of anything. Because everything in those moments mattered. My friend who picked scabs with me, then smeared our blood, pressed our hands together, and swore we were brothers. When I saw that flag on your shirt, and the rope, and the allusion to lynching, a switch flipped, and I was on you. Ripping at your shirt, driving with hands—open, closed. Angry hands. I wanted to open you up and pull out the hate that I thought was inside. I wanted to find it, and ask you why—why you hated me.

My family originates from Mobile, Alabama. I spent summers with my cousins, happy in that heavy, humid air, slurping water from dirty hoses, magnifying ants, and chasing down the ice cream truck. On many nights after a plate of my grandmother’s crispy chicken and mac-and-cheese and collard greens, my cousins and I stumbled belly-out-full onto her porch and sang with the choir of cicadas. We caught fireflies in mason jars, and they looked like stars. We drank pitchers of sweet tea until our teeth ached. We talked with twang, as if trying on a new language. We were kids exploring the territories of summer-life. We hung on to each and every moment, like holding a bead of sweat—the freedom of our bodies with no schoolwork or bedtimes, the joy of ripping off a shirt and feeling the cold spritz of water from the sprinkler on our backs—how we’d arched our spines in surprise and excitement. But we also learned the rules of living in the South while living as a black child in America. We learned why we couldn’t play outside after eight, when the sun sank and the streets emptied. We learned about the danger of skin—how the hooded boogiemen, as we called them, would come and get us. We learned about the fathers and uncles and brothers and boys who hung to that blanketed darkness—how they were ghosts, how they were strange fruit. We learned about three little black girls at the 16th Street Baptist Church—about heaven and that’s where they went. We learned of the word impunity and how it means you can get away with it. We learned that this, too, as Langston Hughes said, was America—and that there’s blood here, in the Southern ground. It’s inside those plantation properties—the shacks, the fields, the home. It’s in the trees, and the willows weep because they remember it. It’s in the foundation of communities, towns, cities, states—the statues, the names, the flags, the economy. The blood of slaves grew a nation. And this blood is inside of me. When I think of “Heritage Not Hate,” when I think of the Confederate Flag, when I think of a noose, all I can think of is a narrative, a cultural and ancestral narrative, that is of a time and a place and a people who were measured by their monetary value. But this isn’t just a criticism of the South. I cannot paint a picture with one stroke. You can still love the South, your home, where your memories are full of laughter and family and beauty, like my memories; you can still honor a place whose history is rich and thick as honey. You can eat and dine and find comfort in its special palate; you can read its authors, its literary masterpieces; you can listen to its music—the Soul, the Blues, the Rock; you can revel in its culture. But you cannot deny that its past is deep-rooted in the pain, suffering, and destruction of black bodies.

We all drove trucks in high school; it was a part of our community culture. Rangers, RAMS, Frontiers, Tacomas, Silverados—like choosing clothes, it’s how we fit in. Mine was a ’97 Ford F-150, blue, V8-Triton, Flowmaster exhaust tip. It rumbled, and so did the twelve-inch subwoofers in the cab. On any given Friday night, a parade of trucks pulled into the school parking lot in the crisp and windy October air. It sounded like a Monster Truck rally, engines revving, music volume maxed, and all the trucks would come sporting new gear: lift kits, double-tread tires, roll bars, mud flaps, back racks, pole mounts. Truckin’, they called it. Nothing different besides who our school football team was facing. The opponents one Friday night were far-out-of-towners who looked vastly different from the faces in the stands. Their bus pulled in slow as if unsure they were at the right location. The football players in maroon uniforms stepped uneasily out the bus, guarding their equipment, panning left and right, anxious in a way that had nothing to do with the game. An off-key orchestra of banjos and guitar riffs and drum kicks and big voices was deafening. Kids sat in their truck beds on lawn chairs and sipped something from red cups. They yelled things the players couldn’t hear and felt good saying it. Mounted on one super-duty diesel waved a thirty-six-inch Confederate Flag. I watched from the seat of my F-150 the brown and black faces of those boys from the other team as they walked over the pavement and stared in disbelief, in fear, in anguish. I felt that way too; I was angry. I was always angry, and ashamed that I had gotten so used to it.

On early autumn Saturday mornings, when the air was crisp and cool, when the grass was slick and the trees shook loose, their stubborn leaves whisking to the ground, my father and I tirelessly drove and dragged the tines of lawn rakes into what was left of the brush, the leaves, the pine needles, and the sweetgum pods. We created a collection of foliage that piled and pigmentated, browns, greens, reds, oranges, and yellows, and in between the sound of the rakes clawing at the dirt, warblers were warbling, sparrows were trilling, and a woodpecker was knocking into a spruce tree. These Saturdays, when the sun stretched carelessly across the billowing light-blue, crowed cloudy sky, our neighbors in minivans would slow and honk their horn or wave from the windows and stop to ask how our day was going, and from those backseats, a friend from school would invite me over for a sleep-over. How little I thought or we thought about my skin or his skin. How little we knew or cared for what differences separated us. This place, the New Jersey Pine Barrens, where I rode my bike in the backyard-wilderness, where I cannonballed into the soft surface of some great lake, where I was safe, is what I called my home. In this place, there are also twenty-one known Hate Groups. And these people were my neighbors.

I think of how none of this makes any damn sense, how you can “love thy neighbor” and also hate them. A place, America, can both be beautiful and ugly. You can absolutely love your country and still criticize it. There is duality here, and it is the duality of racism.

This piece was originally published on November 3, 2020.