Home
»
Reading
»
Rachel Cusk and the Unbearable Lightness of Being 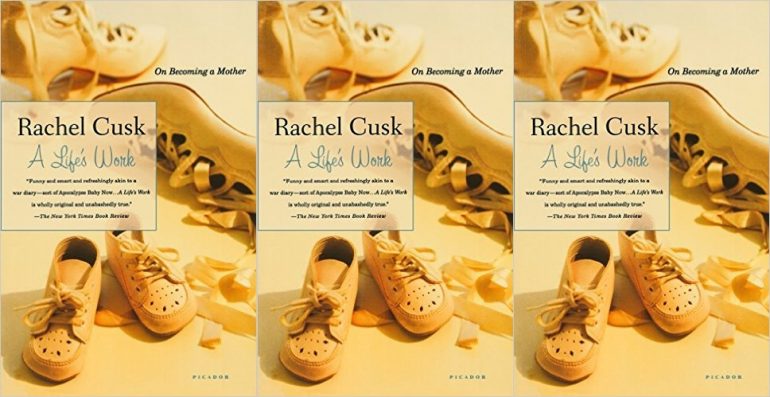 It is only when I walk through the front door to my house that I realize things have changed. It is as if I have come to the house of someone who has just died, someone I loved, someone I can’t believe has gone.

—Rachel Cusk on the aftermath of childbirth, A Life’s Work

When I was pregnant, I felt for the first time in my life that I came first. Suddenly, my needs and desires weren’t mere whims; in the gestation of another being, they mattered tremendously. When this being was extracted from my body, I still felt it crucial to put myself, if not first, than at a very close second. I was the primary caretaker, my body was constantly making food, and I had been through a lot. I thought that “happy mother, happy baby” was the best piece of parenting wisdom I’d ever heard. I answered all of my baby’s immediate needs, and spent the rest of the time tending to what I wanted to do (with the exception of sleep). It was challenging and often flustering, but I felt assured that with time, this servility would become easier.

And it has. My child is no longer such a mind-boggling mystery to me (although it certainly feels like it when, out of the blue, he lets out a single cry in the middle of the night). I am able to predict, answer, or distract him from his needs with relative ease. But rather than reduce, his needs have only multiplied. He now needs—physically needs—to be mobile a good amount of the time. He has a big appetite and preferences in food. He wants to touch certain things and grows furious when I tell him not to. At the same time, I seem to have forgotten some of the habits that used to matter to me. “Happy mother, happy baby” still sounds right to me, but my own needs and wants have grown small, insignificant, frivolous. While in the beginning I complained freely and felt deserving of frequent compensations, as time goes by, I am horrified to find that, against my better judgment, I have begun to resemble that patriarchal woman who views her efforts as less than crucial and her needs as less than important.

In a recent picture of myself, I am the quintessence of Mother: my face straining as I carry my wriggling son in one arm, my back bent as I reach with the other toward an Easter egg hidden in my neighbors’ terrace; my body at once both round with the remains of maternity and angular with skipped meals and constant movement; my bra peeking out nonchalantly as if I’d forgotten that other people existed in the world; the tendons of my bare feet sticking out mid-stride. I look like Atlas offering the world. I am all effort.

And I am happy, because I am in a place where there are smooth, clean floors and no small, loose objects for my child to swallow. Because my neighbors have hardboiled eggs, grapes, crackers, and other baby-friendly foods. Because I can set him on the ground and allow him to crawl around and play with the plastic eggs until bedtime.

In A Life’s Work, Rachel Cusk delves into the body-wrenching, soul-snatching labor of motherhood. She is analytical and methodical, turning to professional literature and to fine fiction in search of answers and reference points. She strives to understand the meaning and effect of sleepless nights, unending nursing, social isolation, but more than the physical effort, she appears lost in the unease of her new perception of herself. How to define and place herself in the world, now that she spends most of her day not reading and writing and choosing between countless diversions, but rather attempting to interpret and anticipate the desires and pet peeves of a small, entirely dependent creature? “Birth is not merely that which divides women from men,” she writes. “It also divides women from themselves, so that a woman’s understanding of what it is to exist is profoundly changed. Another person has existed in her, and after their birth they live within the jurisdiction of her consciousness. When she is with them she is not herself; when she is without them she is not herself, and so it is as difficult to leave your children as it is to stay with them.” The moments in which her daughter—first as a barely-there newborn, later as a toddler of growing independence—does not require her involvement are more jarring to her than the moments in which she must attend to an out-of-the-blue crisis. When she gets paid help, she wastes the suddenly expensive hours searching for her old self in her writing or peeking at the interaction between her daughter and the caretaker from the stairs. I read this description on one of the three days a week my son spends at daycare, stopping occasionally to stalk him through the daycare app on my phone. Oh, I thought, I can go to yoga class after I finish this assignment. Then: Oh, I wonder if there are updates about how much of his lunch he ate!

I have written here before about pushing my own needs and desires so far to the edge of my consciousness that I ultimately forgot them. With each night that I allow myself to get up and go to the bathroom in spite of the risk of waking my baby, I feel reassured that I am gradually regaining the sense of myself as someone who matters. But my commitment to doing it right, as well as the habit of feeling obligated to put baby first, has hijacked my perception of fun had in spite of the child, rather than for the sake of the child.

Last weekend, we went into Manhattan to run some errands and then strolled around. My husband was wearing our baby, who was napping, in the carrier, and thinking out loud about where we should go next. We didn’t need or want anything in particular, just hanging out. “This is so nice,” he said, and he was right. I don’t often get the chance to hang out in the city with my family. But my mind was miles from that sentiment. Instead, it was making lists and predictions: the baby will wake up soon, at which point he will want to crawl around a little. The ground is wet and muddy, so a park is out of the question. Would it be better to just get on the train now and head home, or would the noise wake him up? He’ll want to eat in a couple hours. Do I have enough food for him in the diaper bag? And what about bedtime? Getting home always takes longer than you think. Should we just go? “I was always miserable at these times,” Cusk writes about taking her baby camping or to parties, “rigid with responsibility and worry, so full of anticipation that I forgot to breathe. . . . It was as if at these times I just stopped living because I was so taken up with looking after someone else.”

I glanced at my husband. He knew all these things, and yet he was able to simply enjoy the situation without worrying. To him, caring for our child was often strenuous, but not a source of anxiety. As Cusk points out, men appear more comfortable defining parenthood as a purgatory of unending tears, poop, and demands, while women—though they might feel the same—become entangled in a web of silent guilt. I felt envious of my husband in that moment. Planning isn’t a bad thing, I consoled myself. Planning helps parents avoid meltdowns. Scheduling helps babies stay calm and consistent. Doing “happy mother, happy baby” gets tricky when unhappy baby means miserable mother. Ultimately, it seems, regardless of the baby’s degree of happiness, the permanent state all too easily becomes “nervous mother.”

For the first few months of his life, I struggled to be in the moment with my son. The pull of text messages from the outside world, of diverting Facebook updates, of work that had to be done, even of his own pictures taken on previous days, caused me to once and again ignore him when he was quiet and self-sufficient enough not to ask me for anything. Now I find myself in the reverse predicament. Out in the world of my old self, the world of cafes, museums, and long walks, I am constantly looking to the next item on the agenda, putting out fires before they start. I find that even as he sleeps or looks around curiously, I cannot pause for long enough to enjoy myself. Even when he is at daycare and I am left to my own devices, the pleasure of free movement and pretending I am responsible for nobody quickly eludes me. The work of childcare has become second nature. The work of living my own life—foreign and awkward. Cusk writes: “. . . It is with a shock that I see, like a plummeting stock market, the resulting plunge in my own significance. Consequently I bury myself further in the small successes of nurture. After three or four weeks I reach a distant point, a remote outpost at which my grasp of the baby’s calorific intake, hours of sleep, motor development and patterns of crying is professional, while the rest of my life resembles a deserted settlement.”

For months, I kept logs of when and how much our child ate and slept, analyzing patterns, consulting with other parents, and solving problems. I had achieved so much, but was left with an overworked, self-critical mind that had formed its own sleeping difficulties. I will never finish fixing things, creating and breaking habits, and looking for where I went wrong. But at the same time, when I manage to twist the leaky faucet of concern shut, I can sit silently with my child in my lap, run my hands through his fragrant Kurt Cobain hair, and just stay there a while. Upon her daughter’s first birthday, Cusk muses: “I find that I am living in the knowledge of what I have, so that I see happiness before it quite passes. It has taken me a year to achieve this feat, this skill that has eluded me over a lifetime. I understand that it means that I am standing still.”