Home
»
Book Reviews
»
Nonfiction
»
The Recovering: Intoxication and Its Aftermath by Leslie Jamison 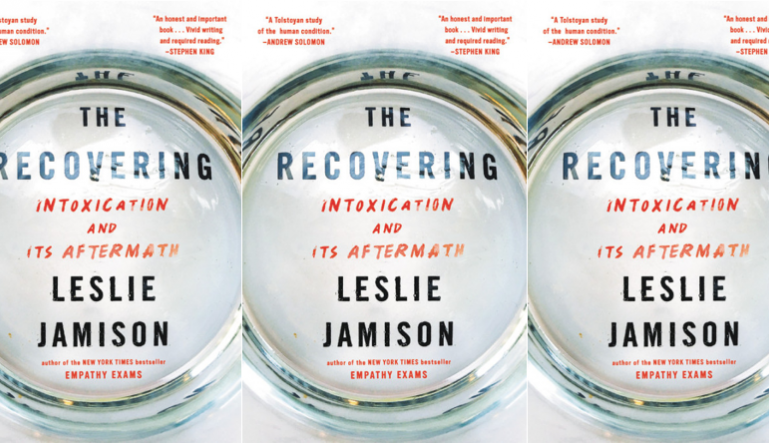 The Recovering: Intoxication and Its Aftermath
Leslie Jamison
Little, Brown, and Company | April 3, 2018

This is boring! an old man called out the first time Leslie Jamison shared at an Alcoholics Anonymous meeting. He yelled this after she’d gone through the talking points of her pain, which she’d carefully rehearsed at home. “[T]his man had managed to tap veins of primal insecurity,” Jamison writes, “that my story wasn’t good enough, or that I’d failed to tell it right…to make it bad or bold or interesting enough.”

The Recovering isn’t Jamison’s attempt to revive her narrative instincts, which she fears sobriety has flatlined. Instead, it is an embrace of the hard-learned revised instincts Jamison has developed because of recovery. “[A] story’s sameness is precisely why it should be told,” and it’s this redundancy that makes the stories valuable, Jamison learns.

By positioning her recovery story among many others, Jamison de-emphasizes her privilege as the writer. “[T]he story of my sadness was never just mine,” she insists. “It has always included strangers: not just the strangers I met in meetings, but the strangers whose dependence had taken them to highway chain gangs rather than church basements.” That Jamison is not a prisoner in a chain gang, she acknowledges, is because she is “precisely the kind of nice upper-middle-class white girl whose relationship to substances has been treated as benign and pitiable,” unlike those who have been demonized by the American justice system. She neither glosses over her privilege, nor elides how selfish and self-centered she was as a drunk, how unable she was to look beyond her own trite pain and shamefully mundane sadness.

The Recovering, then, is intentionally both just another addiction memoir and Jamison’s self-aware examination of herself as an alcoholic and what it means to tell one’s story. Her account is threaded through with the similes, metaphors, and precise, condensed descriptions characteristic of her prose. There’s a beauty to it that those who already love Jamison will appreciate, but she hasn’t compromised her ethos to achieve it. “I sometimes sank into the old memories like a comfortable couch,” Jamison says, but the critical distance she writes from allows her story to be useful to those who live it or have lived it or will live it, and understandable for all the rest of us.

For those unfamiliar with such a consuming desire for the feeling of being drunk, Jamison deftly creates the bodily experience of it again and again: “Being drunk was like having a candle lit inside you;” “Drinking was plush and forgiving. It sparkled like backyard fireflies. It smelled like good meat and smoke.” When she finally tells her therapist about her drinking, she immediately thinks “about how [their] conversation [is] going to pollute [her] drinking that night, like a piece of hair stuck in the back of [her] throat.”

Interwoven in her narrative of recovery is another familiar trope: the push and pull of an unhealthy relationship. “Falling in love was the only sensation that had ever truly rivaled drinking,” she writes, and so it makes sense that the breakup of Jamison’s most consuming relationship runs parallel with the peaks and valleys of her alcoholism, and her descriptions of each are just as sharp and transporting.

In the end, Jamison’s story is only one of a handful that anchor the reader. Famous and lesser known writers who struggled with alcoholism, such as Jean Rhys, John Berryman, and Charles Jackson, figure prominently in the book, as do recovering alcoholics that Jamison has come to know. She creates, as she set out to do, “a book that might work like a meeting—that…place[s] [her] story alongside the stories of others.” In this context, the definite article in the title reads as far more appropriate than a possessive pronoun.

Jamison’s necessity for the first-person plural—“because recovery had been about immersion in the lives of others”—drives the narrative to the end. The final paragraph is composed of brief moments in the lives of alcoholics, none of them named, the famous blending in with the non-famous, Jamison blending in with all of them so that when she recounts a meeting she went to where someone forgot to unlock the church basement, the story becomes the room we are all trying to get into. “The door was locked,” she writes, “and it did not stop us.”