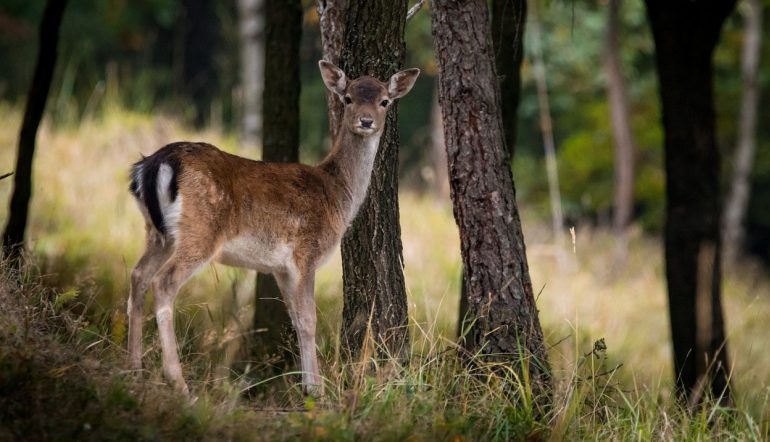 In “Beast,” a story from Samantha Hunt’s collection The Dark Dark, a woman experiences an adulterous, animalistic encounter and begins turning into a deer at night. Employing this fantastical premise, Hunt speaks to domesticity and its constraints, as well as to desire’s shape-shifting potency—its ability to take different guises as well as its potential to alter living bodies. Over thirty pages, the story’s understated magic realism asks what shapes sexual longing inhabits, and how longing might prove capable of altering one’s entire reality.

Akin to Carmen Maria Machado’s “The Husband Stitch,” in which a woman’s husband is obsessed with the ribbon she wears around her neck (and which proves to be the thing attaching her head to her neck), “Beast” employs surreal imagery in depicting male desire as it works insidiously to transform female flesh. For the narrator of “Beast” in particular, an iteration of masculine lust runs concurrent with her own clouded longing in urges that she can’t quite fathom of herself.

From the story’s opening, the narrator’s relationship with her own body is made clear: “I read the newspaper in bed at night, propping it open on my belly. My boobs fall off to either side as if they are already asleep. They care little for the news of the world after the day is done.” Shortly after, we see her husband benignly comb her limbs for ticks as he subdues her attempts at conversation, “‘Oh. Shhhh,’ he says and turns to rub my face. He puts his hand on my cheek to stop my jaw from moving.” Evident is a ubiquitous isolation, an atmosphere of domestically charged constraint entwined with the narrator and her husband’s perception of her flesh. It’s from this place of unremarkable and entirely recognizable dissatisfaction that we’re told the narrator has “been having a really strange week.”

Meaning that, once her husband is asleep, she transforms by slow, frightening degrees into a deer.

At first, we’re not entirely sure what this transfiguration means, though it seems an unmatched response for the itching solitude she feels stretched out in her marital bed. Then, as she stands over her sleeping husband in her deer-form, “licking the hair of his armpit, cleaning him,” the narrator recalls a story from her youth:

When we were young, there was a man named Pete who lived around here. Pete kept a wild deer as a pet. Everyone said that Pete had done things with the deer…Soon people started saying even more. They said that Pete had done things with his own daughter also…She’d been taken away by the state. People didn’t know why but they guessed why. The spookiest part of the whole story, and the reason people suspected him, is because Pete named the deer after his daughter, Jennifer. He’d call the deer, ‘Jennifer. Jennifer.’ You could hear him at night. ‘Jennifer. Jennifer.’ Slowly. And the deer would come when called, as if it were a dog and not a wild creature. She’d come to him.

Reading these lines, I thought of Born, a sculpture by Kiki Smith in which a deer births a grown woman. The bronze piece suggests that, across the species, there are experiences that see us indelibly linked; it reminds us of these sensations we hold in common. The sculpture seems a cipher for what’s most unnerving about this paragraph: the equalizing, lateralizing effect of lust. By the last line, we realize that incest and bestiality are not, in fact, what most strike the narrator.  Indeed, what she imparts most firmly to us is that the deer came when called. The truer shock is the animal’s subservience: that male desire saw her wildness revoked. When confronted with relentless male longing, there is nothing so spectacular about female flesh: human or animal, it answers to the same name.

Only now does the narrator reveal that she had an adulterous encounter the weekend before, in the bathroom of a bar with a man who called himself “Erich.” She says, “he started biting my neck and chest like he was lost in some fever, like he was going to eat me with his lips that were thick and filled with blood.” Her sudden kinship with an animal of prey is a residue of this exchange, a template her subconscious provides as she struggles to reconcile her body with her insurgent desire. She goes on to tell us that “Lust makes room, the way a bomb exploding makes room, clearing things out of the way.” As the deer cannot help but grow into the space Pete’s daughter has vacated, so the narrator cannot help but fill the space her adultery has rendered: a deer answers to the name of a girl, a woman turns into a deer.

Hunt has described the Dark Dark as a place that is “free, quiet, nurturing, strong…paradoxical, sublime, ripe with possibility,” and so it seems reductive to interpret the story in punitive terms. Again, we recall the narrator’s fixation on the animal’s complicity: “the deer would come when called… She’d come to him.”  While she never states that Erich’s brutal mouth gave her pleasure, she does tell us that she “always thought there was something romantic about the way <Pete> named the deer after his daughter. Even if it was messed up.”

As “Beast” begins to close, the narrator reveals to her husband the fact of her nightly transformation, following which he turns into a buck. They then step outside, onto the street, where he ushers her into a vast herd of deer: “He curls his spine…and lurches quickly, urging me forward, as if that is where we both belong, as if that is where we’ve both been always.” Her new body doesn’t signal a macabre, gothic sentence, but a shift in self-knowing that, though blurred and strenuous, is also ripe and teeming.