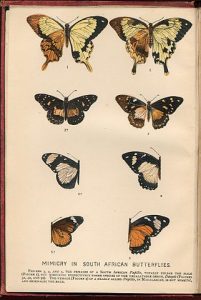 Mimicry in South African Butterflies – chromolithographic frontispiece of The Colours of Animals by Edward Bagnall Poulton, 1890. Licensed under Public domain via Wikimedia Commons

I didn’t study creative writing as an undergraduate; it wasn’t an option. When I enrolled in the MFA program at University of Washington, what I craved more than workshop (which I’d experienced a few times in continuing education settings) was the elusive “craft” class: reading analytically not to make an argument about literature (which I also enjoy) but to learn how another writer achieved an artistic effect. One of the most enriching classes I took at UW was such a class, taught by David Bosworth.

We looked at everything from aphorisms and fables to stories by Joseph Conrad and James Baldwin and Mavis Gallant and Marguerite Duras, among others. Students chose additional stories they wanted to dissect for the class and brought in Flannery O’Connor, George Saunders, Roberto Bolaño, and more. I felt little gaps in my novel-heavy education filling. We imitated, we analyzed, we explored choices the writers did and did not make. The one thing we were not allowed to do was write parody, a rule for which I was grateful. Allowing parody, I think, could have opened the door to being a little less thoughtful, a little less open to learning from what all of these writers offered.

My favorite assignment from the class, from which I learned a ton, was to read a story I felt was exemplary many times, taking notes on how its different technical parts were working–structure, style, theme, etc.–and then taking the “essence” of that story and writing a new story, one I wanted to write. This set up the potential to move from an exercise in imitation to creating something to be excited about.

In a Rumpus essay on the necessity of slowing down as a reader and writer, Benjamin Percy wrote of a similar exercise, in which he outlined a story by Flannery O’Connor paragraph by paragraph and wrote “a piece that pasted new flesh upon this skeleton”; after repeating this exercise with a few of her stories, he had a hands-on sense of how to write a causal narrative. In the Writer’s Chronicle, Richard Bausch also speaks to the enormous usefulness of imitation, how he started by imitating Whitman and other poets when he thought he’d be a poet and how he still encourages his students to imitate and has been encouraging it for years.

So in the spirit of back to school season, here are couple of ways to explore imitation, thoughtfully.

1. For structure: Choose a story you admire and want to understand more deeply from a craft perspective. Read it several times. Read it as many times as you can stomach. Outline it paragraph-by-paragraph, section-by-section. What happens in each paragraph? What is the function of that paragraph? If the story is divided into sections, what is the purpose of each of those sections? Then write your own story using the outline of the story you admire. This is not a quick exercise. Give yourself time to read, think, process, and write deliberately. Give yourself a week or two.

2. For style: Choose a long paragraph or two by a writer you admire. Type it out. Replace each noun with a noun of your own, each verb with a verb of your own, each adjective, each adverb, etc. Retain the grammatical structure and the variety in sentence type. (If you are interested in boning up on grammar you might try The Deluxe Transitive Vampire or How to Write a Sentence: And How to Read One.) Paul Lisicky has a similar exercise in Naming the World and other Exercises for the Creative Writer and suggests typing your exemplary paragraph twice to get a better feel for its rhythm before attempting your own replacements–and then doing two of your own versions. David Bosworth’s advice on this exercise was to avoid choosing similar content–if you choose a winter scene, don’t write a new winter scene. It would be fun to do this exercise with a handful of writers working in wildly different styles: F. Scott Fitzgerald vs. Ernest Hemingway, Raymond Carver vs. Salman Rushdie, Angela Carter vs. Amy Hempel–you get the idea. And of course, beyond prose rhythm, you might also consider diction, sense of humor (or lackthereof), and psychic distance, but perhaps it’s best to focus on one aspect of style at a time.