Home
»
Reading
»
On Dressing Up 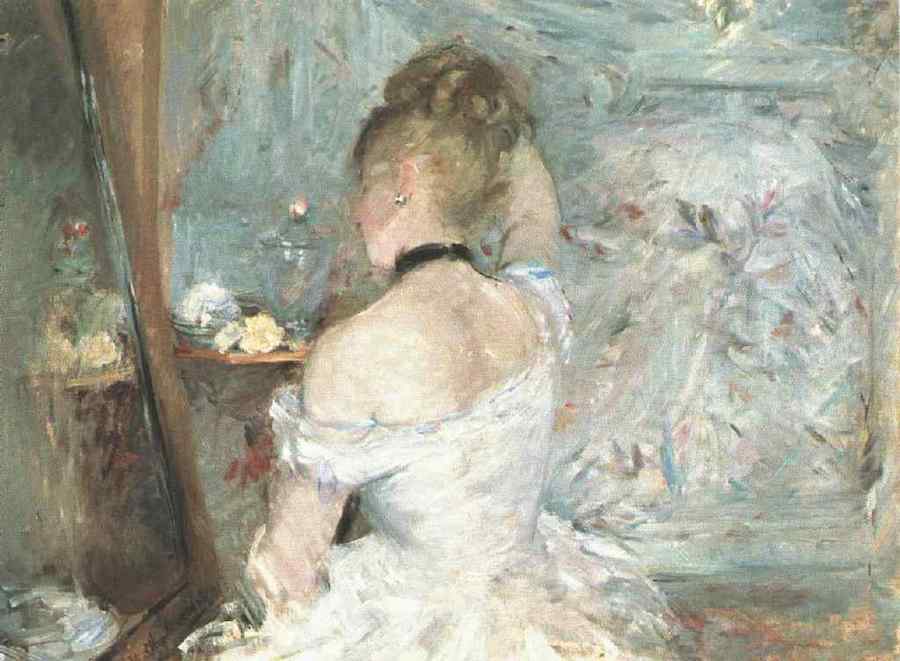 There’s a section of Alexander Pope’s The Rape of the Lock that’s famous enough to have its own almost-official title. The Toilet Scene. People mention this scene often when they talk about the poem’s mock-epic qualities, its training of a heroic gaze, modeled on the loftiness of The Aeneid or The Iliad, on much smaller subjects—a suitor’s theft of a lock of hair, without permission, from a young maiden named Belinda. The Toilet Scene occurs early in the poem, before this fateful theft. In it, we watch as Belinda and her maid prepare her to meet the world:

The inferior priestess, at her altar’s side,
Trembling begins the sacred rites of Pride.
Unnumbered treasures ope at once, and here
The various offerings of the world appear;
From each she nicely culls with curious toil,
And decks the goddess with the glittering spoil.
This casket India’s glowing gems unlocks,
And all Arabia breathes from yonder box.
The tortoise here and elephant unite,
Transformed to combs, the speckled and the white.
Here files of pins extend their shining rows,
Puffs, powders, patches, Bibles, billet-doux.
Now awful Beauty puts on all its arms;
The fair each moment rises in her charms,
Repairs her smiles, awakens every grace,
And calls forth all the wonders of her face;
Sees by degrees a purer blush arise,
And keener lightnings quicken in her eyes.

This whole passage is a parody of pre-battle scenes from more straightforward epics, where our heroes array themselves in impressive, sometimes god-given armor. Still, the epic beneath the mockery feels, to me, alive and well. The process of dressing up—altering the layer of self we present to the world—contains a very real kind of power, I think. I say this as a person who isn’t particularly fashionable, whose vision when it comes to this arena is slight and swayable. But I think most of us know the way certain clothes, certain methods of presenting ourselves, suffuse us with new feelings, as if we’d put on different skins. Ones we’ve chosen, for once.

When I was a kid, I had a set of dress up clothes I kept stashed away like secrets. They were a cast-off assembly, but I loved them, and I think I worried their power might diminish if I left them exposed to the air. I remember most clearly a set of three dresses we’d bought at some yard sale. Spaghetti-strapped, flowy, with outer translucent layers that spun in a satisfying way when you twirled. One was purple, one was dark pink, and one was a striped rainbow of pastels. The colors were personalities. Each one, when I put it on, made me a different person.

Literature often makes use of the power of dressing up—bows to this power, in fact. It’s why there are so many disguises in Shakespeare, and why it takes everyone so long to figure out that, for instance, Viola is not actually a man, when how convincing can that disguise really be? After all, though, that’s not the point. The point is to adopt and intensify this kind of chosen transformation—to make dramatic use of its potential. And disguise is only one variant of literary dress-up. There’s also the re-framing of the existing self, which is what Ruchama, the protagonist in Nathan Englander’s “The Wig,” is after when she makes herself a majestic new wig to restore some of the faded loveliness of her youth. Trying it on for the first time, she anticipates walking into her synagogue and unveiling her new self to a friend who has made her feel small:

She can’t wait to sit down in front of Nava, to shake out her hair and have it pour into Nava’s lap over the back of her seat. The commotion. Ruchama will get her whispering. The men will hiss for silence, and no one will talk about how she’s let herself go ever again. Nava will see Ruchama’s face framed like a maiden’s. She will remember who is most beautiful.

This self-alteration, though, involves risks, as Ruchama—along with just about every other literary character who tries it—will discover. (This too is perhaps part of why Shakespeare allows his disguises to succeed so fully—so we can see, just as fully, all those disguises’ attendant complications.) You can put on a new skin, but you may or may not be ready to walk around inside it. In Kelly Link’s “Catskin,” the main character, Small, spends most of the story inside a cat-suit made for him by his mother, who is a dead witch now reincarnated as a cat named The Witch’s Revenge. (In the story this all makes perfect, wondrous sense). By the story’s end it has come to seem to Small as if he and his mother both are lost in their new skins:

He can feel himself becoming smaller and smaller. In the morning he will be so small that when he tries to put his catskin on, he can barely do up the buttons. He’ll be so small, so sharp, you might mistake him for an ant, and when The Witch’s Revenge yawns, he’ll creep inside her mouth, he’ll go down into her belly, he’ll go find his mother. If he can, he’ll help his mother cut her catskin open so that she can get out again and come live in the world with him, and if she won’t come out, then he won’t, either. He’ll live there, the way that sailors learn to live, inside the belly of fish who have eaten them, and keep house for his mother inside the house of her skin.

Sometimes the new layers don’t just change the way the self is perceived—they change the actual self. What’s beneath can shift in learning to fill new outlines, and in absorbing the world’s reactions to them.

Belinda and her maid know the stakes, I think. This knowledge explains the sacredness of their efforts, which are a serious thing. Yes, Belinda is preparing as if for a battle, and this might make her look silly—except maybe she knows that eventually there will be one, of one kind or another, and that she’d best ready herself to use these weapons, the only ones she has.