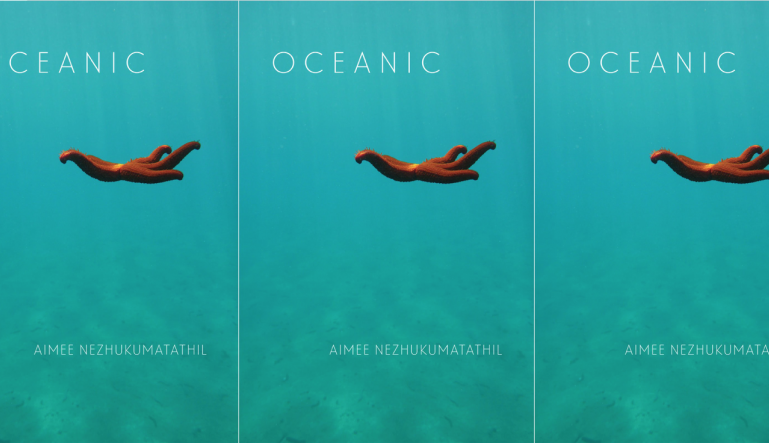 Throughout Oceanic, Nezhukumatathil’s poems invite readers to explore new ways of “checking the waters.” The opening of “Invitation”—“Come in, come in—the water’s fine!”—reminds us “it’s okay to glance down once in a while into the sea” rather than constantly meditating on its horizontal stretch and its far-off meeting with the sky. “So many lessons bubble up,” Nezhukumatathil writes, “if you just know where to look.” As our attentions descend below the surface, we encounter a different sort of sea—a world of hatchetfish and narwhals where “colors humans have not yet named glow in caves made from black coral and clamshell.” But these unfamiliar environs never turn unsettling. Indeed, as “Invitation” assures us, “you can’t get lost here.” Instead, the “singular tooth” of a narwhal “needles you like a compass pointed toward home,” while “the paper nautilus ripple-flashes scarlet and two kinds of violet when it silvers you near.” Rather than hiding from human touch, it seems as though the ocean has been waiting for us all along—and that we, without knowing, have been waiting for “the feel of [its] good bite or embrace” as well.

This act of “glancing down” resonates in powerful consequences. The final lines of “Invitation” offer a question—“Who knows what will happen next?”—that also presents a significant opportunity. What happens next, it turns out, is not only the possibility of a different perception of the sea but also the potential for sensing the world itself entirely and radically anew:

…If you still want to look up, I hope you see
the dark sky as oceanic, boundless, limitless – like all
the shades of blue revealed in a glacier. Let’s listen
how this planet hums with so much wing, fur, and fin.

In such moments, Nezhukumatathil unabashedly embraces the –ic of her collection’s title and insists that “oceanic,” properly understood, far surpasses a definition as “of or relating to the ocean.” Invoking the “boundless” and the “limitless,” Nezhukumatathil sets out a simple, yet profound, argument about our relations with the natural world: the more we feel the ocean’s embrace, the sooner we sense its particular “hum” everywhere.

In this oceanic spirit, Nezhukumatathil’s poems wander an abundance of the planet’s most “humming” places, transporting readers from the Pumpkin Festival in Clarence, New York to the existential sadness of a whale washed ashore on Germany’s North Sea coastline—from the Monte San Salvatore funicular in Switzerland to the Harvard Museum of Natural History’s famous Glass Flowers—and from the elephants and bamboo forest of India’s Periyar National Park to the “cicada-electric Mississippi night.” Likewise, they devote considerable attention to spaces and places that hum in quieter ways: a fresh manicure, a shared brambleberry tart, a childhood bedroom, Prince’s “Starfish and Coffee.” These, without exception, are poems replete with images that last and linger: “the toothy grin of an apple-fed horse,” “the penny-taste of the garden hose,” the “blush-green current of auroras across [a penguin’s] claws.”

A review of Oceanic would be incomplete without brief mention of Nezhukumatathil’s deft touch with various poetic forms, from the haibun to the ghazal. Of particular note are two beautiful aubades: “Perch Bones and Apple Aubade” and “Aubade with Cutlery and Crickets.” From the latter:

In the dinner I cook for myself tonight,
you are an open drawer of cutlery.

I’ve smelled the top notes of butter knives
at your shoulder, the tang hidden in the blade

…Or maybe what
I smelled that morning still full of starlight

and crickets when we said goodbye –
was the clean coolness of a knife’s ricasso,

the flat rest for a thumb just before
the blade disappears into its handle.

In each case, the form finds the poem’s content—and vice versa—with such ease and grace that one almost wonders how poems concerning the end of summer (“End-of-Summer Haibun”) or separation from a child (“Travel Mommy Ghazal”) ever found other shapes to begin with.

In the poem that follows “Aubade with Cutlery and Crickets,” entitled “When You Select the Daughter Card,” Nezhukumatathil reimagines a tarot deck to include the figure of “the Daughter.” The Daughter, the poem tells us:

…is sometimes mistaken
for mermaid, but she can also walk quiet
on the shore, symbolizing a harmony
between earth and the dazzle of the sea.

This multiplicity, this ability to generate harmony and relation between earth and sea, even when “mistaken for mermaid,” is the peculiar talent of the Daughter—and it is the brilliance of this collection as well. This is an important work, both for its poetic merits and for its incisive capture of the increasingly precarious nature of life, both human and nonhuman, on this planet. It should come as no surprise to any reader, therefore, when, in the middle of this particular poem, Nezhukumatathil announces that “the power flowing through the Daughter is oceanic.”